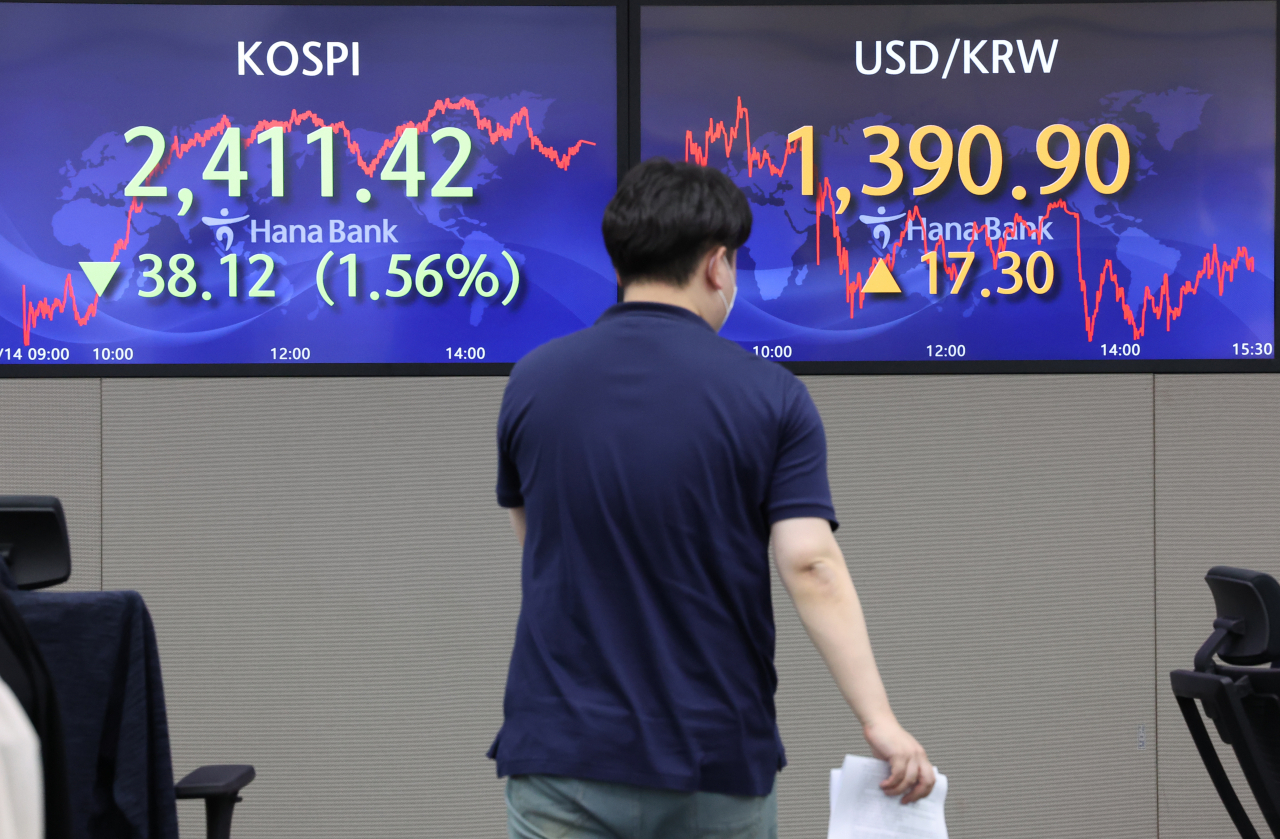 South Korean stocks fell more than 1.5 percent Wednesday, as the hotter-than-expected US inflation data fueled concerns over the Federal Reserve's looming sharp rate hikes. The local currency fell sharply against the US dollar.

"The stronger-than-expected US consumer price index dispelled the possibility of the Fed's pivot the market had hoped for," Cho Yeon-joo, an analyst at NH Investment & Securities Co., said.

"Rather, fears of recession from policy failure have grown, as the Fed's tightening policy has proved ineffective in curbing the inflation," Cho said.

Foreigners sold off about a net 163 billion won worth of local equities, with institutions also opting to unload around a net 240 billion won. Individuals were net buyers of nearly 390 billion won.

Wall Street suffered the biggest fall in two years Tuesday (local time) after the US Labor Department said the August consumer price index (CPI) slowed to an 8.3 percent on-year gain, higher than the consensus of an 8.1 percent increase.

The core CPI, which excludes food and energy prices, rose 6.3 percent from a year earlier, topping the forecast of a 6.1 percent on-year gain.

The stronger than expected inflation data dented expectations that the Fed might scale back on its aggressive monetary tightening.

Analysts are certain the Fed will go with a third consecutive three-quarter percentage point hike at the end of the two-day monetary policy meeting starting Tuesday. Some have even bet on a full percentage-point hike.

Seoul shares lost ground across the board, led by tech giant Samsung Electronics, which dipped 2.24 percent to 56,800 won, and top automaker Hyundai Motor, which dropped 1 percent to 198,500 won.

Among the biggest decliners were internet portal operator Naver, slumping 3.56 percent to 230,000 won, and biopharmaceutical bluechip Celltrion, which tumbled 3.49 percent to 180,000 won.