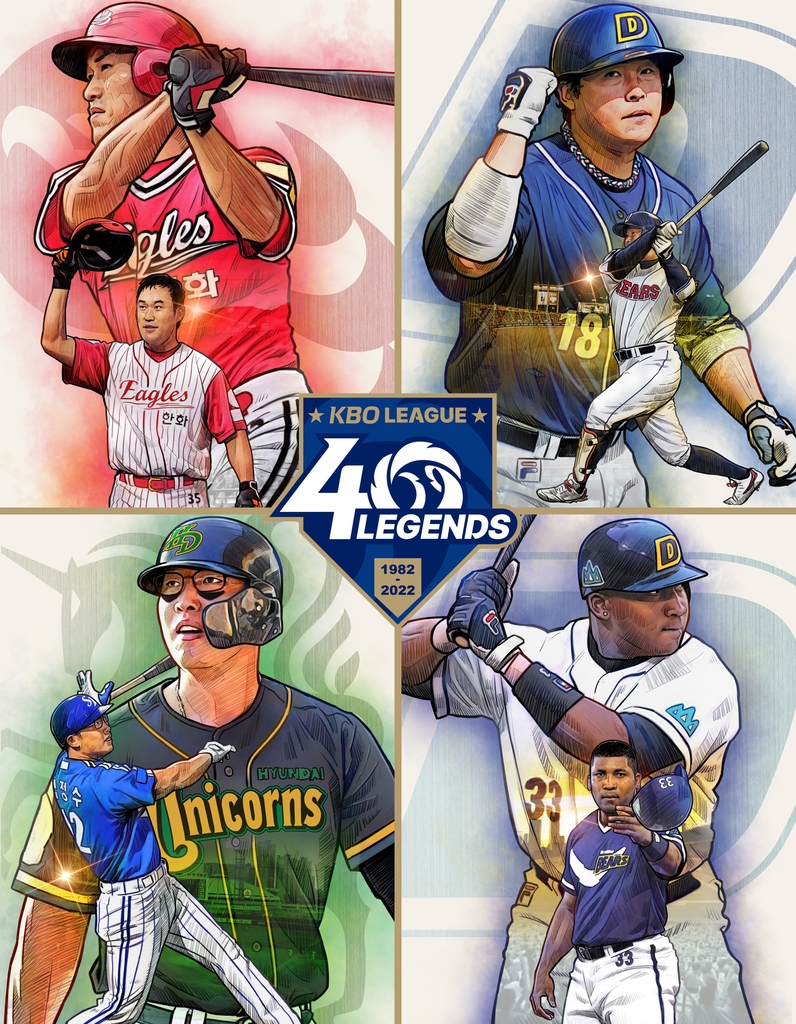 Four right-handed slugging legends in South Korean baseball were introduced on Monday as the latest members of the commemorative team marking the 40th anniversary of professional baseball in the country.

Jang, who finished 10th in the voting by experts and fans, wasn't even drafted out of high school, and joined the Binggrae Eagles (currently Hanwha Eagles) on a tryout contract. He showed some power potential with 12 home runs in 1988, his second KBO season, and then won the first of his three straight home run titles in 1990.

That streak culminated with a then league record 41 home runs in 1992. He also led the KBO in RBIs in those three consecutive seasons from 1990 to 1992.

Jang, a five-time Golden Glove winner, set numerous "firsts" milestones in his 19-year career, spent entirely with the Eagles. He was the first player to hit 300 career home runs in league history and the first position player to win back-to-back regular season MVP awards, doing so in 1991 and 1992. He was also the first to have at least 30 home runs, 100 RBIs and 100 runs scored in a single season, and the first KBO player to reach 1,000 RBIs and 1,000 runs scored.

Jang was the face of the Eagles franchise in his heyday, and Kim Dong-joo served in that role for the Doosan Bears from 1998 to his final year in 2013.

Kim, 29th in the voting, burst onto the scene by homering in consecutive at-bats in his very first KBO game on April 11, 1998. He finished that season with 24 home runs and remains one of just seven players to have hit more than 20 home runs as a rookie.

The 2003 batting champion and a four-time Golden Glove winner is the owner of the longest home run in KBO history -- a 150-meter blast that left Jamsil Baseball Stadium, the league's most cavernous park, on May 4, 2000.

Kim, Shim and Woods formed the league's most devastating trio of sluggers in the late 1990s. Shim, 30th in the voting, had then career highs of 31 home runs and 110 RBIs for the Bears in 1999, but he elevated his game to another level following a trade to the Hyundai Unicorns before the 2001 season.

Shim exploded for 46 home runs in 2002 and then belted 53 home runs in 2003, finishing just three back of the leader, Lee Seung-yuop of the Samsung Lions, in the most memorable home run race in KBO history.

Woods arrived in the KBO in 1998, the first season in which the league opened its doors to foreign players. The American slugger wasted no time, homering in his very first trip to the plate in 1998, en route to a 42-homer season. He was voted the regular season MVP that year, making him the first foreign player to win that honor.

Woods followed that up with three more 30-homer seasons, and had 25 homers in 2002. He wrapped up his KBO career with 174 home runs, more than any foreign player in league history.

The KBO will unveil the last four members of its anniversary team next Monday and will also reveal those who finished 41st to 50th as honorable mentions. (Yonhap)