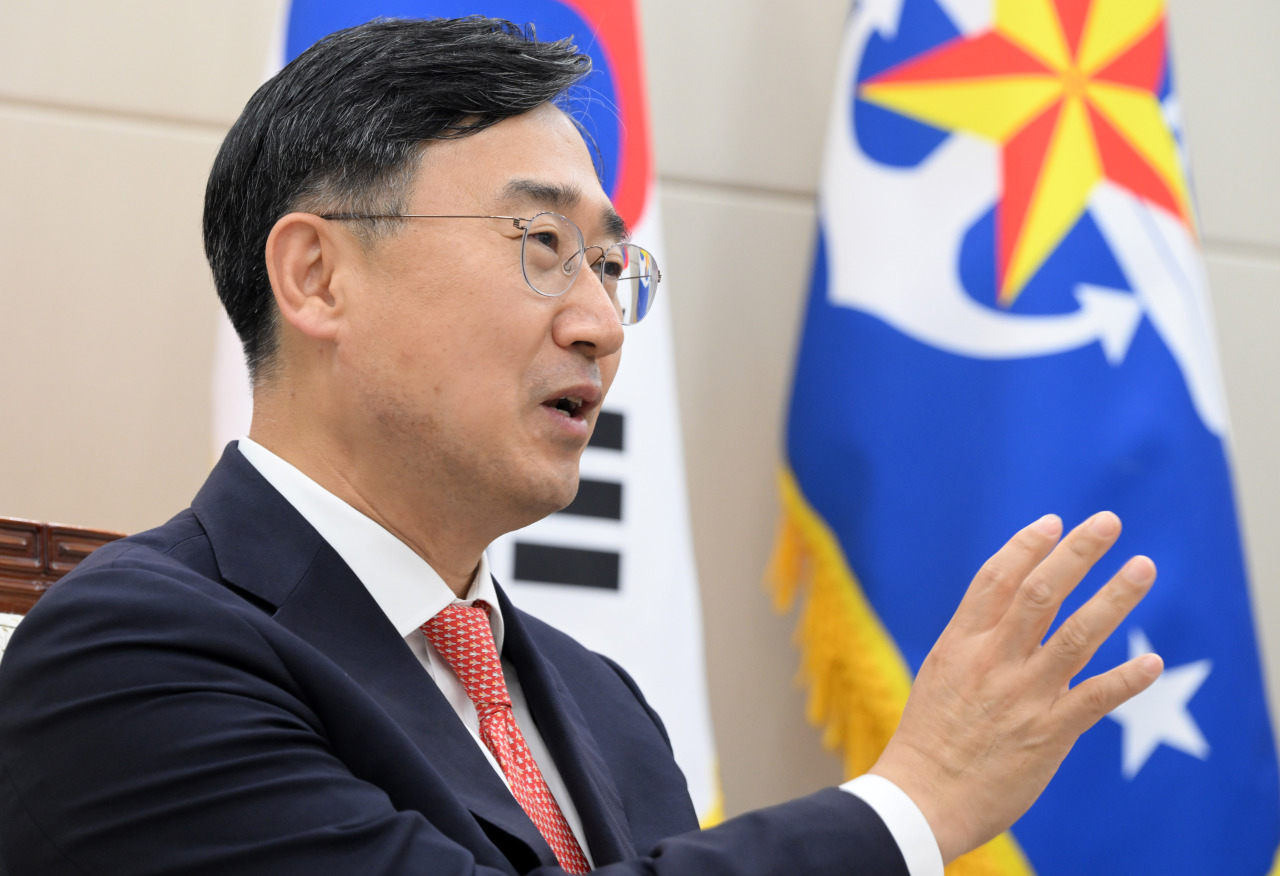 South Korea’s Vice Defense Minister Shin Beom-chul said speaks during an interview with The Korea Herald at the defense ministry building in Seoul on Tuesday. (Im Se-jun/The Korea Herald)
The Yoon Suk-yeol government seeks to develop trilateral security cooperation among South Korea, the United States and Japan to the next level and normalize defense cooperation with Japan to counter North Korea’s rapidly escalating and existential missile and nuclear threats.

South Korea wants to take it up a notch, but at the same time, it sees fence-mending with Japan as indispensable for bilateral and trilateral security cooperation to be “sustainable” and more robust, South Korea’s Vice Defense Minister Shin Beom-chul said Tuesday in an interview with The Korea Herald.

Shin also underscored that Seoul and Tokyo should concurrently take steps toward improving bilateral ties that have been locked in a vicious circle, given that the concerted move will lessen the political burdens of rapprochement both for the Yoon and Fumio Kishida governments.

How to take trilateral cooperation to next level?
Shin said that South Korea, Japan and the US might be able to restore their security cooperation to its past glory without fence-mending.

As part of the efforts, the three countries could seek to resume long-suspended trilateral military exercises and training such as a search-and-rescue exercise or anti-submarine warfare exercise that had been conducted before the Moon Jae-in government came into office.

“But it would be challenging to further develop trilateral security cooperation to higher levels than they had been in the past without improving ties between South Korea and Japan,” Shin said.

“The Yoon Suk-yeol government will continue to seek to expand security cooperation among South Korea, the US and Japan. But the scope of cooperation and pace to enhance it will be inevitably restrained in the absence of improvement in South Korea-Japan relations.”

Anti-Japanese sentiment in Korea has been spreading, as has anti-Korean sentiment in Japan. So fence-mending would create conditions conducive to pushing forward trilateral security cooperation and military exercises.

A close interconnection between domestic politics and foreign policy has been an obstacle to bringing trilateral security cooperation to the next level, despite its growing significance. Enhanced and expanded trilateral coordination is also a key part of the Joe Biden administration’s Indo-Pacific engagement strategy.

Domestic politics is key determinant
Shin also elucidated that Seoul and Tokyo have a laundry list of areas for defense and security cooperation.

But the precondition to put defense and security cooperation into action is to break the current deadlock in bilateral relations stemming from historical disputes, including Japanese colonial era sexual slavery and wartime forced labor.

“If we seek to advance defense cooperation by making unilateral concessions, it would undermine the sustainability of defense cooperation in light of domestic political factors,” Shin said, adding that it is difficult for both the South Korean and Japanese governments to make unilateral concessions, as such actions would pose a “political burden” for them.

Shin underscored that both Seoul and Tokyo should jointly move to mend ties that have been locked up in a vicious circle, adding that the Yoon Suk-yeol government has publicly made overtures toward Japan on several occasions.

Yoon pledged to “expeditiously restore and develop relations between Korea and Japan by inheriting the Kim Dae-jung-Obuchi Declaration which proposed a vision of a comprehensive future of Korea-Japan relations” in his speech marking Korea’s 77th National Liberation Day on Aug. 15.

“What is crucial is that Japan should respond (to our overtures), then we will be able to put our heads together to figure out ways to cooperate,” Shin said. “Against our expectations, we have not yet received a substantive response.”

But Shin believes Seoul and Tokyo will be able to find common ground before the year is out.

There has been some progress. The South Korean and Japanese vice defense ministers held a rare in-person meeting Wednesday in Seoul for the first time in six years, according to South Korea’s Defense Ministry.

Shin met Japanese Vice Minister of Defense for International Affairs Masami Oka on the margins of the three-day Seoul Defense Dialogue 2022, which began Tuesday. The two discussed the security situation on the Korean Peninsula and in the region and pledged to continue the trilateral security cooperation as a key vehicle to deter and counter North Korea’s missile and nuclear threats.

Both sides “committed to making mutual efforts to normalize defense cooperation” to deal with security challenges that they face and contribute to maintaining regional security and peace.

“We seek to intensively pour our resources, including defense budget, to expeditiously complete the establishment of a three-axis system,” Shin said, adding that the Defense Ministry has “shifted priorities” among defense projects to that end.

The Defense Ministry has proposed to raise expenditures on establishing an indigenous three-axis defense system by 9.4 percent in the defense budget for 2023.

The three-pronged defense system consists of the Kill Chain preemptive strike mechanism, Korea Air and Missile Defense, which aims to build complex and multilayered missile defense shields, and the Korea Massive Punishment and Retaliation plan. The military also plans to establish a “strategic command” to command and control the three-axis system by 2024.

Shin said the Defense Ministry has sought to develop the three-axis defense system “in a balanced manner,” when asked if the Yoon government’s focus is to enhance preemptive strike capabilities which President Yoon said Seoul must develop during his campaign.

The vice defense minister said a preemptive strike can be justified as an “act of exercising the right of self-defense when South Korea detects a clear sign of North Korea using missiles and nuclear weapons in an escalating crisis and the state of war.”

To that end, it is crucial to reinforce South Korea’s intelligence, surveillance and reconnaissance capabilities and develop “ultraprecision strike systems.”

South Korea and the US plan to have an in-depth and comprehensive discussion on ways to deter North Korea at a meeting of the vice ministerial-level Extended Deterrence Strategy and Consultation Group to be held this month, according to the Defense Ministry. The meeting will be held for the first time since January 2018.

Seoul and Washington plan to conduct tabletop exercises on the use of deterrence assets and deployment of US strategic military assets at an early date.

“What makes a huge difference from the past is that we seek to substantially reinforce cooperation at all levels to strengthen the alliance and formulate detailed plans on the extended deterrence,” Shin said. “In the process, we aim to substantially strengthen our training on the deployment of strategic assets through exercises and other drills such as a tabletop exercise, which is another major shift we’ve made.”

In principle, South Korea sees that the two Koreas can take various measures for mutual military confidence building in stages from initial steps, operational arms control to structural arms control if North Korea takes substantive measures toward denuclearization. A reduction in conventional arms is one such example.

“In essence, we have reiterated our will to engage in the confidence-building process that North Korea has referred to if North Korea shows its willingness to denuclearize,” Shin said. “If North Korea responds, we can present our proposals. But it’s not strategically wise for us to proactively make proposals when North Korea remains silent.”

When asked about the utility of the inter-Korean comprehensive military agreement, Shin said the Yoon government has “adhered to it and has the willingness to continue to comply with it.”

“We have basically identified several problems in the process of crafting the agreement and its contents,” Shin said. “But if we renounce the agreement first, it will turn into a destabilizing factor.”

The South Korean vice minister also explained South Korea’s unilateral effort is not sufficient to maintain the agreement, urging North Korea to “show its sincerity in implementing the Sept. 19 agreement.”

“We could reassess the validity of the Sept. 19 military agreement if North Korea makes provocations that the Republic of Korea is unable to tolerate.”