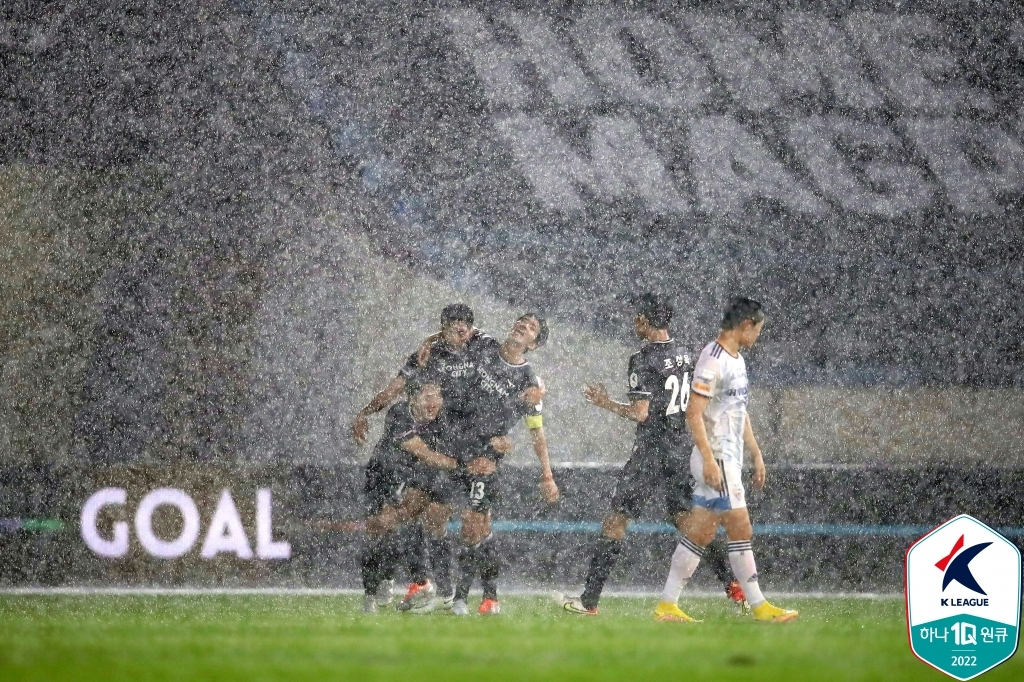 Scripting a memorable feel-good underdog story, Seongnam FC, the worst team in South Korean football this year, gave themselves something to smile about on a rainy Sunday night.

Seongnam FC stunned the K League 1 leaders Ulsan Hyundai FC 2-0 at Tancheon Stadium in Seongnam, just south of Seoul, for their second consecutive win. Kim Min-hyeok and Kwon Soon-hyung scored in each half to give Seongnam only their second winning streak of any length this year.

Ulsan suffered their first loss since July 2, as their nine-match undefeated run came to an end.

Seongnam FC improved to 24 points, still in last place among the dozen K League 1 clubs but now just four points back of Daegu FC for 11th.

The 12th-place team in the K League 1 at season's end will be automatically relegated to the second-tier K League 2 for next year. The 10th and 11th seeds will get a reprieve in the form of playoff matches against K League 2 teams, with the winners getting to play in the K League 1 in 2023.

Compounding Seongnam's on-field struggles lately has been the prospect of the club's sale and relocation.

Seongnam FC are owned and run by the municipal government of Seongnam. In a recent media interview, Seongnam Mayor Sin Sang-jin said he may sell the team to a private company because Seongnam FC won't get better any time soon and they're wasting taxpayers' money.

Faced with uproar from the team's supporters, Sin has since backtracked and said while he may still sell off the team, the objective is to keep the club in Seongnam.

With their fans showing unwavering support despite the seemingly hopeless season, Seongnam FC have played some inspired football of late. Before Sunday's match, Ulsan head coach Hong Myung-bo had said his players had to match Seongnam's level of urgency and determination, or they would have a difficult time producing much offense.

And it turned out Hong had reasons to be worried.

Seongnam were much quicker with their transition game than their opponent, and they applied high pressure to great effects. Mother Nature also cooperated, as the soaked-up pitch neutralized Ulsan's normally great passing game.

Kim Min-hyeok scored with a gorgeous volley that went in off the hand of goalkeeper Jo Hyeon-woo in the 36th minute. Then in the opening moments of the second half, substitute Kwon Soon-hyung doubled Seongnam's lead with a volley of his own.

Ulsan had a goal called back on an offside, and Leonardo's shot struck the crossbar with about five minutes left.

With Seongnam on the way up, Daegu FC now find themselves in real danger of automatic relegation. They were pounded by Pohang Steelers 4-1 on Saturday and are now winless in 12 games.

Also on Saturday, Jeonbuk Hyundai Motors, sitting in second place, failed to put more pressure on Ulsan, as they were held to a 2-2 draw by Gimcheon Sangmu FC.

Jeonbuk have 51 points, now eight points out of first place, while Pohang are nipping on Jeonbuk's heels with 48 points.

On Friday, Gangwon FC blanked Incheon United 1-0 to climb to sixth place. Suwon FC ceded that spot after playing Jeju United to a 2-2 draw on the same day.

After 33 matches, the top six clubs will be grouped into Final A, while the bottom six will end up in Final B for the "split" phase of the campaign. Teams will then play five more games within their own groups to complete the season.

On Sunday, Suwon Samsung Bluewings beat rivals FC Seoul 3-1 in the latest "Super Match" derby. The showdown at Suwon World Cup Stadium also drew the largest crowd in any game this season with 16,333.