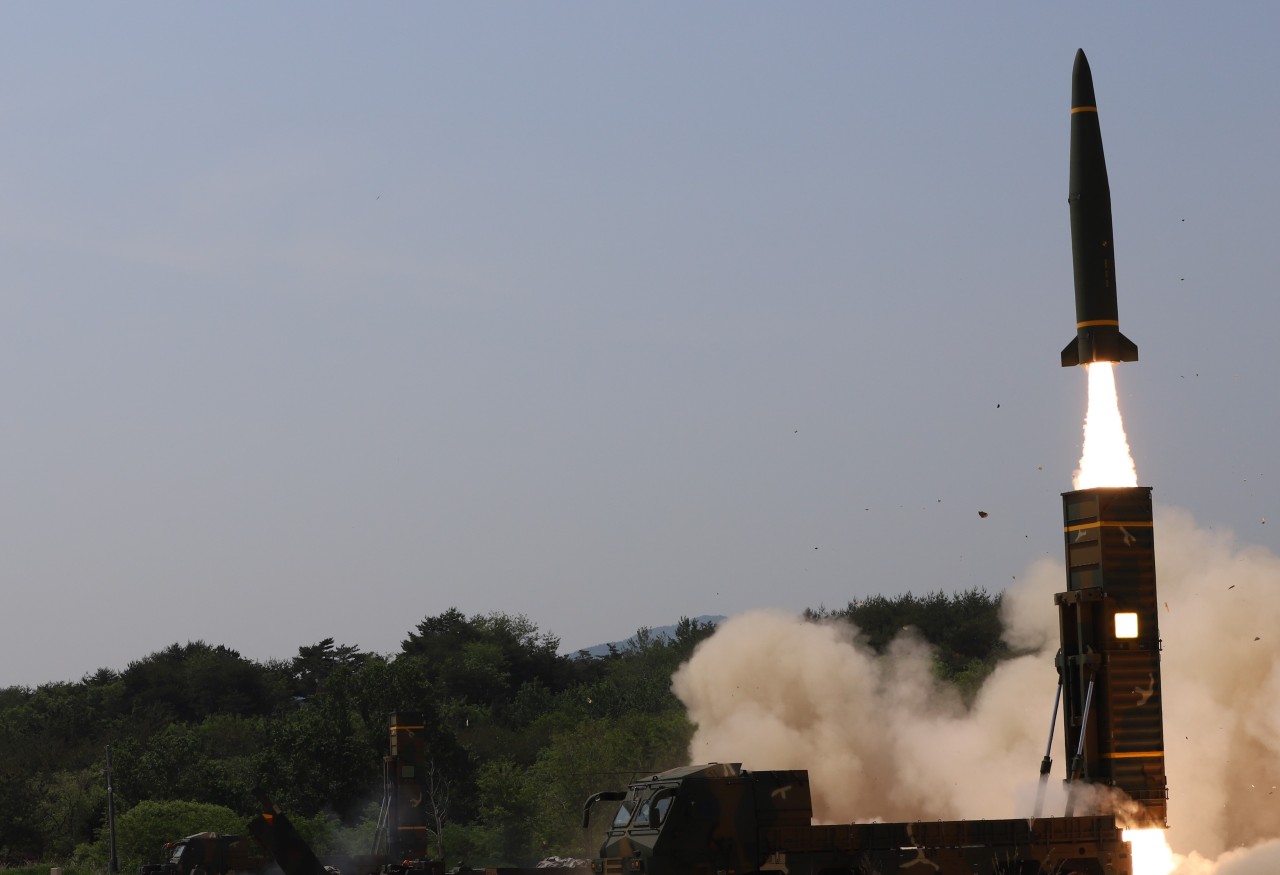 South Korea fires one surface-to-surface missile Hyunmoo -II toward the East Sea on May 25. South Korea`s military conducted live-fire missile training on the same day near the eastern sea border after North Korea launches three ballistic missiles toward the East Sea including an apparent intercontinental ballistic missile (ICBM). (File Photo - Joint Chiefs of Staff)
South Korea’s Defense Ministry has proposed to raise expenditures on establishing an indigenous three-axis defense system by 9.4 percent amid North Korea’s mounting missile and nuclear threats, but has left a controversial project of locally building a light aircraft carrier out of the spending bill.

The overall defense budget for 2023 approved by the Cabinet on Tuesday morning set a 4.6 percent year-on-year increase to around 57.1 trillion won ($42.3 billion), the Defense Ministry said.

Approximately 40.1 trillion won is allocated to expenses on force operations and maintenance, up 5.8 percent compared to last year’s budget.

The operation and maintenance appropriations cover the cost of operating and maintaining military equipment and facilities and other expenses such as salaries and benefits for military personnel and training and education.

The budget for the "force improvement" program is proposed to rise by 2 percent to around 17 trillion won compared to the previous year.

“We’ve heavily invested in boosting soldiers’ morale by raising their salaries, significantly improving the quality of meals, clothing and living conditions to make them suitable for soldiers of the future generation and improving conditions for military officers to command and for soldiers to serve,” the ministry said.

“We also focusing on allocating our funds to establish the three-axis system to counter North Korea’s nuclear and missile threats and reinforce indigenous technological capabilities and strengthen the foundation of the defense industry,” it added.

The budget for the three-axis system would increase by 9.4 percent compared to this year to implement the Yoon Suk-yeol government’s defense policy, a senior official at South Korea’s Defense Acquisition Program Administration, who requested to remain anonymous, told a closed-door briefing Friday before lifting the press embargo.

The Defense Ministry has sought to expedite the establishment of the three-axis defense system to counter and incapacitate North Korea’s escalating missile and nuclear threats.

Light aircraft carrier project left out
But the proposed defense spending notably excludes expenditure on a contentious project to indigenously develop a light aircraft carrier, senior officials at the DAPA confirmed during the closed-door briefing. The defense project was one of former President Moon Jae-in’s key campaign promises.

DAPA officials elucidated that the exclusion does not indicate the termination of the defense project for the foreseeable future. But South Korea's arms procurement agency now views that it should evaluate the suitability of locally developing carrier-capable aircraft before continuing the project.

“We are preparing to commence a basic design of a light aircraft carrier. But the outcome of the ongoing assessment of the domestic development of carrier-based aircraft would affect the decision on whether to begin a bidding process,” one DAPA official told reporters.

The bidding process was originally set to start later in the year under the Moon government so as to choose a defense contractor for a basic design of a light aircraft carrier. But a military source who is familiar with the issue confirmed to The Korea Herald that the defense project is likely to be scrapped in light of the Yoon Suk-yeol government’s critical view of the project.

The DAPA’s recent decision to purchase additional 20 F-35A stealth fighter jets has been widely seen as a prelude to aborting the navy’s plan to procure and deploy F-35B stealth fighter jets -- with short take-off and vertical landing (STOVL) systems -- to a light aircraft carrier.

The Unification Ministry has proposed around 1.4 trillion won in overall spending for the next year, a 3.35 percent on-year decrease. The bill was also approved during the Cabinet meeting Tuesday morning and will be submitted to the National Assembly on Friday.

Among them, the ministry allocates approximately 1.23 trillion won for the inter-Korean cooperation fund, a 3 percent decrease from around 1.27 trillion won this year. The rest is earmarked for other general projects, including expenditures for supporting the resettlement of North Korean defectors.

The expenditures for the next year rise by 22 percent compared to this year despite worsening inter-Korean ties.

Around 1.5 billion won has been newly allocated to “substantially improve the human rights situation of the North Korean people” in coordination with UN agencies and international nongovernmental organizations.

The Unification Ministry also underlined that the inter-Korean cooperation fund has been formulated with the focus on providing financial support to North Korea. The Yoon Suk-yeol government proposed to provide economic compensations in return for North Korea’s substantive process toward denuclearization in its recently unveiled “audacious initiative.”

“We have established financial foundations to support the implementation of the audacious initiative … by securing the budget for large-scale food and fertilizer aid, modernization of North Korea’s infrastructure and among others,” the ministry said in a press statement.

To that end, the ministry sets aside funds for inter-Korean economic cooperation, food assistance and fertilizer aid although the funds have long existed.