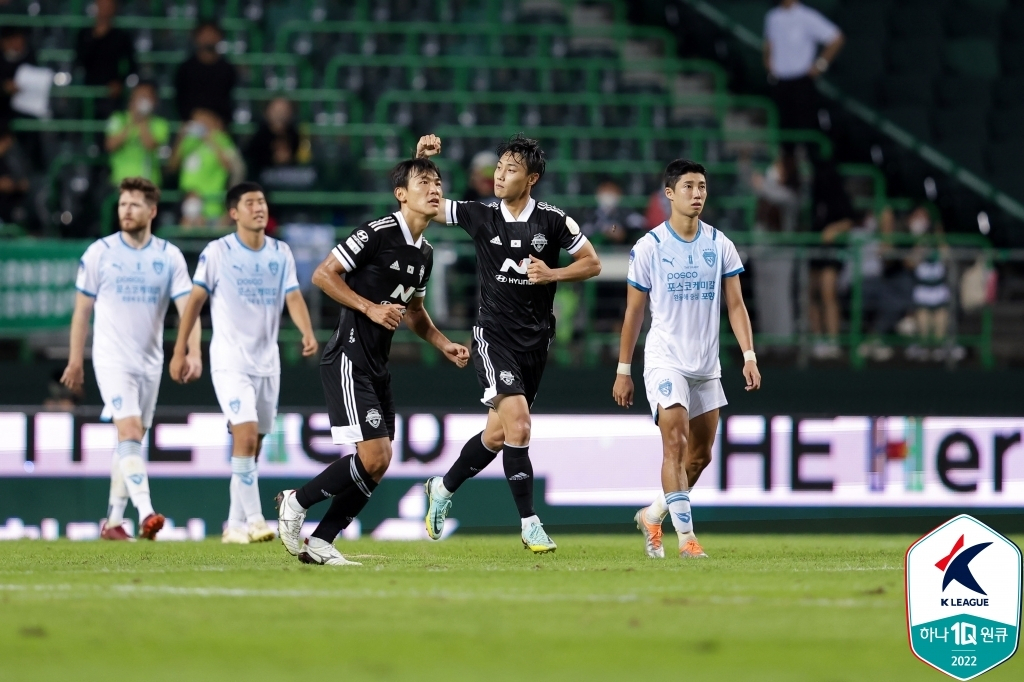 With a second-half rally in their first match back from a heartbreaking loss in continental play, Jeonbuk Hyundai Motors have managed to stay within striking distance of their sixth consecutive K League 1 title.

Jeonbuk played Pohang Steelers to a 2-2 draw at home, Jeonju World Cup Stadium in the southern city of Jeonju, Monday night, and reached 50 points for the season.

Jeonbuk trail leaders Ulsan Hyundai FC by nine points with 10 matches to go this season. There is one last clash left between the teams that have ruled the K League for a few years now.

Each of Jeonbuk's past three titles came at the expense of Ulsan, which have suffered their share of late-season meltdowns. The nine-point gap is certainly not insurmountable, given the recent history for these two squads.

Jeonbuk were still trying to bounce back after losing to Urawa Red Diamonds on penalties in the semifinals of the Asian Football Confederation (AFC) Champions League just outside Tokyo last Thursday. It was Jeonbuk's third extra-time contest in an eight-day span at the AFC tournament, so the toll the elimination took on Jeonbuk was perhaps equal parts physical and mental. Some of the regulars began Monday's match on the bench.

After a scoreless first half, Pohang struck for two goals within the first four minutes of the second half. Jeonbuk's first response came with Gustavo's eighth goal of the season in the 54th minute. Then with about five minutes left, Paik Seung-ho converted a penalty to bring Jeonbuk level.

With a victory, Pohang would have moved within two points of Jeonbuk for second place. But they still remain five points back at 45 points, with Incheon United, a 2-0 winner over FC Seoul on Saturday, right behind Pohang at 44.

Ulsan's 1-1 draw with Jeju United on Saturday had left the door slightly open for Jeonbuk, which responded with the hard-earned draw.

On Sunday, Seongnam FC beat Suwon FC 2-1 for their first win under caretaker boss Chung Kyung-ho. The former assistant is filling in for Kim Nam-il, who resigned last Wednesday with Seongnam mired in last place.

Seongnam are six points behind the 11th-place Gimcheon Sangmu FC, which had a scoreless draw with Daegu FC on Sunday.

The action resumes Friday with two matches, followed by two each on Saturday and Sunday. (Yonhap)