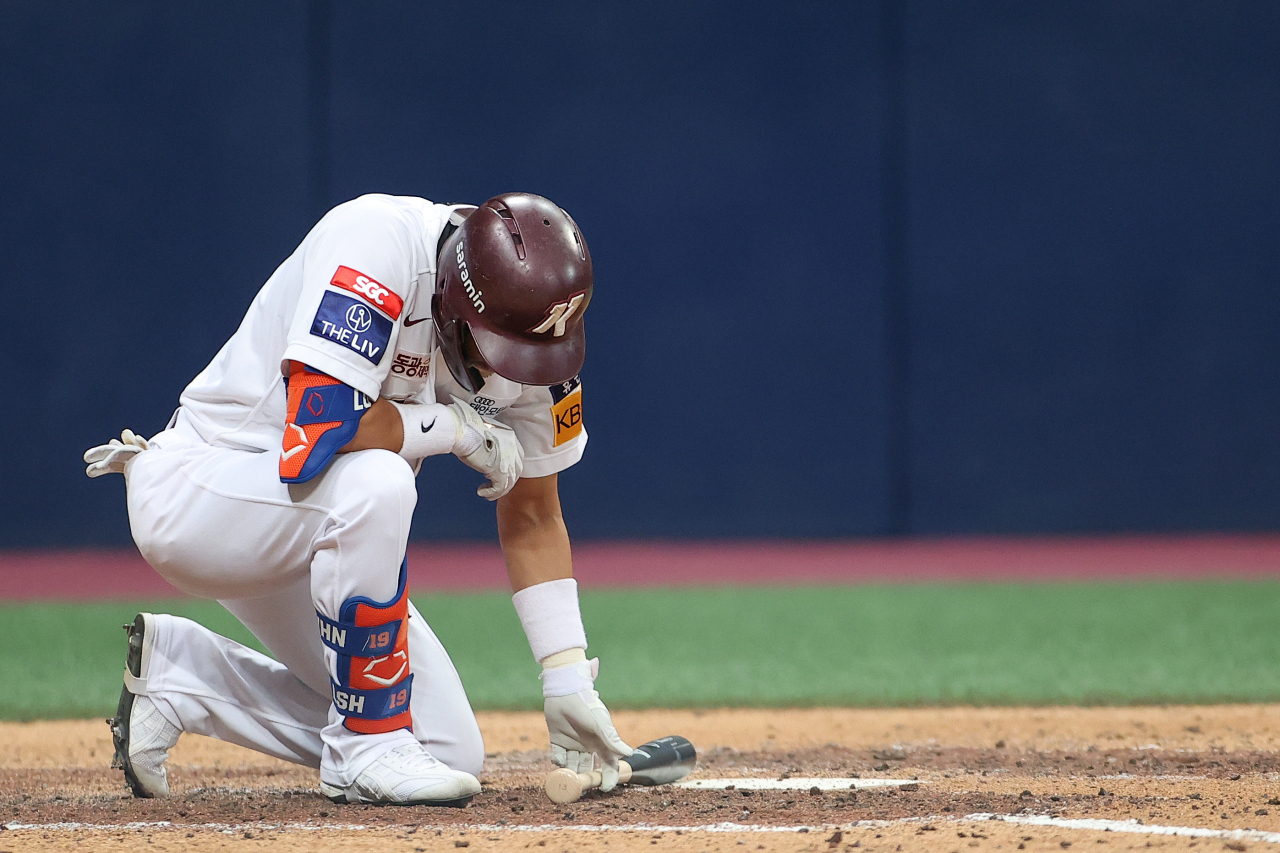 Lee Yong-kyu of the Kiwoom Heroes reacts after popping out on a sacrifice bunt attempt against the SSG Landers during the bottom of the sixth inning of a Korea Baseball Organization regular season game at Gocheok Sky Dome in Seoul last Sunday. (Yonhap)

On July 10, the Kiwoom Heroes, thanks to a three-game winning streak, sat only 2.5 games behind the SSG Landers for first place in the Korea Baseball Organization (KBO). The Landers had been at the top of the standings since the start of the season, but the Heroes were making a hard push. Their record stood at 54-30-1 (wins-losses-ties).

Fast forward to Tuesday, as the Heroes enter a new week of action in third place, now 13.5 games back of the Landers. The Heroes have gone 7-18-1 since July 10 and also have the worst record in the KBO so far in August at 4-12.

The Heroes, losers of five straight, have virtually no chance of catching the Landers now, with 33 games left this season. More crucially, the Heroes are barely holding onto third place. The defending Korean Series champions KT Wiz are just half a game behind in fourth. For the postseason, the third seed will have the home field advantage in the first round series against the wild card winner. The fourth seed will play the No. 5 team in the wild card game.

The Heroes seem to be stuck in a long tunnel with no light visible at the end. They have the worst team ERA this month at 6.00. The bullpen has been especially dismal. Their relievers have pitched to an 8.78 ERA in August, with the league average sitting at 4.61. In comparison, the Wiz's relief corps has a 1.90 ERA in August.

The Heroes' starters have been about the league average this month with a 4.26 ERA. With six crucial games on the horizon this week, those starters will have to work deep into games and keep their unreliable relievers off the mound as much as possible.

The Heroes have been underperforming at the plate too. Yasiel Puig, their biggest offseason acquisition, has tried to hold up his end of the bargain with the bat, but he has been rather ineffective in the outfield.

Manager Hong Won-ki said before Sunday's game that Puig had been making the same type of mental and physical mistakes, despite repeated urgings from the coaching staff. By several metrics, Puig rates as one of the KBO's worst defensive right fielders.

The former National League All-Star has often missed the cutoff man or made ill-advised throws to wrong bases to allow runners to take the extra 90 feet.

In other words, Puig is doing much of the same things that he'd done in the majors, where he was known as a head case.

"We've seen things like that since the early days of the season. We've brought that up with him on many occasions, but he has not changed," Hong said. "That's a big problem. When a player keeps making the same mistakes, it's something to think long and hard about.

"Coaches can talk to players all they want, but during games, players must be in control of their own plays," the manager went on. "He has to realize every little play like that can lead to a run being scored by the other team and can put our team in a tough spot."

The Heroes will start the week by hosting the Kia Tigers for two at Gocheok Sky Dome in Seoul. They will then visit the surging NC Dinos, who own the best record since the All-Star break at 14-6. The Dinos are trying to chase down the Tigers for fifth place and will begin the week 4.5 games out.

On the weekend, the Heroes will play two games against the LG Twins, who have zipped past Kiwoom for second place and hold a 5.5-game lead.

The Wiz also have a tough week ahead, highlighted by two games against the Landers and another two versus the Dinos.

The Landers will look to increase their lead at the top. Their week will include two games each against the Giants and the Samsung Lions.

The Landers have an 8-3-1 record against the Giants and a 9-3 mark against the Lions so far this season. (Yonhap)