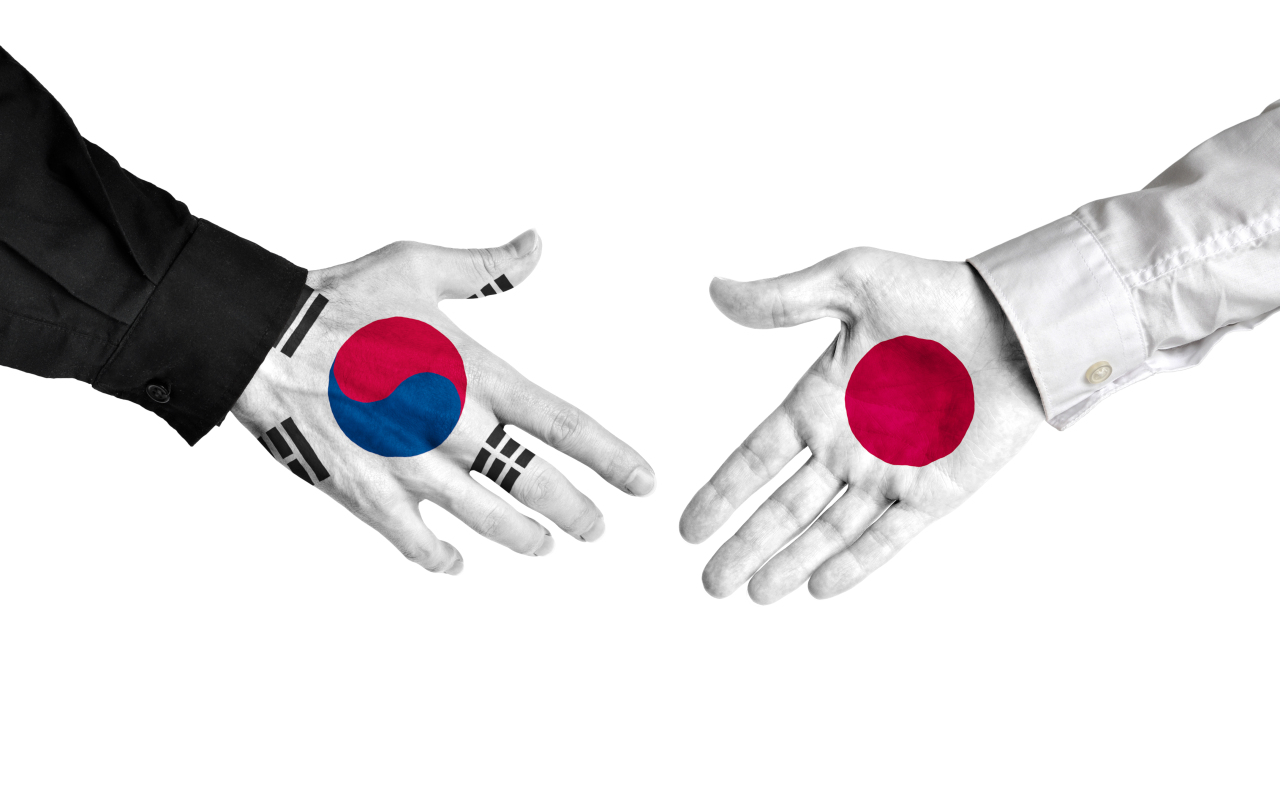 The South Korean (left) and Japanese flags. (123rf)
More than half the companies surveyed by the Korea Enterprise Federation, one of the five major business lobby groups here, said Korea and Japan should settle their disputes and improve economic ties, especially in trade, the data showed Tuesday.

Conducted from July 27 to Aug. 2, the survey polled 207 companies employing at least 30 workers and 57 percent of them backed the idea, saying efforts to take advantage of new trade deals like the RCEP and IPEF should take place once the two countries find a way to resolve historical issues.

During World War II, Japan forced Koreans to work in brothels and labor camps. Tokyo argues that compensating the victims is no longer necessary, but Seoul disagrees, with its top court having ruled in 2018 that the laborers are entitled to receive damages. Diplomatic ties have since frayed.

But the Korean businesses surveyed, mostly medium-sized firms, expect the two neighbors to work out their differences in search for growth, utilizing the Regional Comprehensive Economic Partnership and the Indo-Pacific Economic Framework, which bring countries in the Pacific Rim to trade more freely.

The respondents also said better Korea-Japan ties could help boost investor confidence and create jobs. The biggest challenges, they added, are shrinking revenue and ongoing disruptions to the supply of raw materials.

“Revenue has taken a hit, among other things, because of worsening relations, but the expectation the relationship will improve is high,” said Bae Jung-yeon, head of the international affairs team at the KEF.

Nevertheless, industry watchers are wary of unguarded optimism, because many steps are needed to return Seoul-Tokyo ties to their pre-2018 days when the 2015 agreement on wartime sex slaves was essentially scrapped.

“The Yoon government has just started working on the policy, and we have to wait it out, see how that pans out. It’s been just three months since he took office,” a government official familiar with the matter said on condition of anonymity because the topic is sensitive.

A day earlier, President Yoon Suk-yeol vowed to work fast on restoring ties with Japan, which he described as a neighbor that fights together against threats to global freedom.

The two neighbors would reach a resolution to the historical disputes as they keep working on shared values, Yoon said at a ceremony to celebrate Liberation Day, which marks independence from Japan’s 1910-1945 colonial rule.

But on the same day, Japanese Prime Minister Fumio Kishida sent an offering to the Yasukuni Shrine, which Korea and China see as a symbol of Japan’s militarism because it honors 14 Japanese wartime leaders convicted as war criminals.

Visits to the shrine by Japanese officials are considered signs that Japan is not ready to make amends for its wartime wrongs.