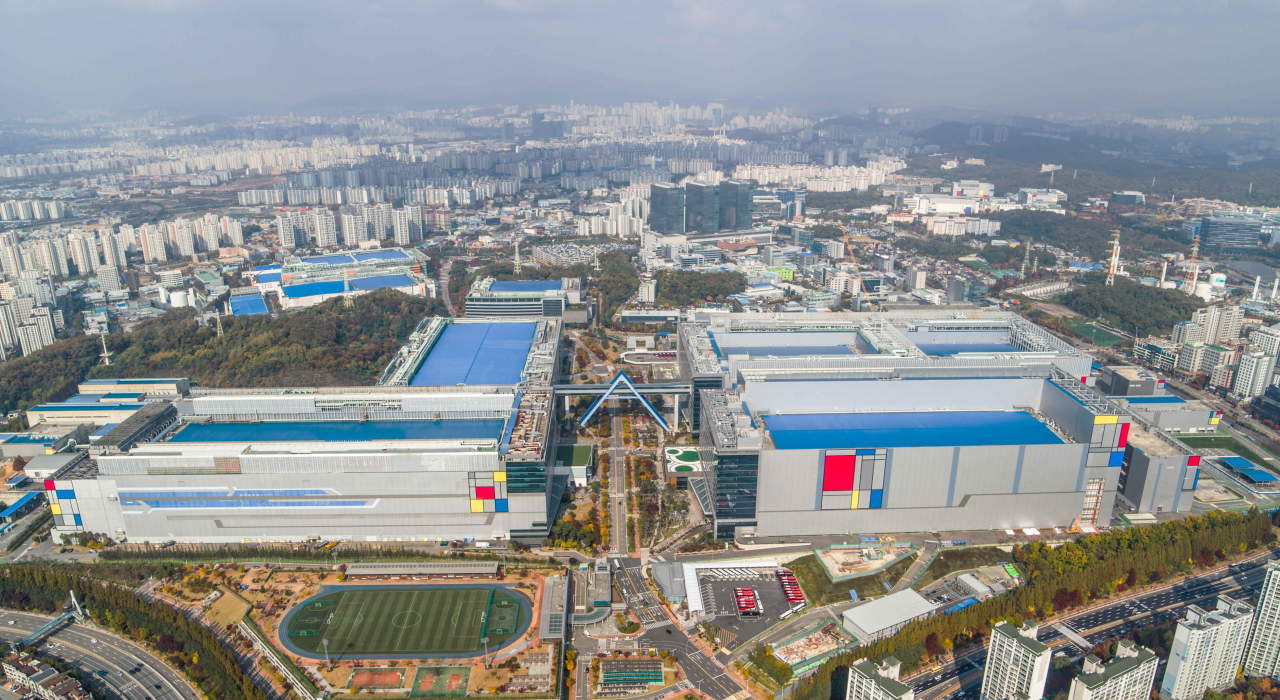 An aerial view of Samsung's Hwaseong semiconductor complex in Hwaseong, Gyeonggi Province. (Samsung Electronics)
The heavier burden of corporate taxes and cost per hire are weighing on South Korean chipmaking giants like Samsung Electronics, indicating the unfavorable conditions leave them behind competitors like Taiwan-based TSMC amid intensifying semiconductor competition worldwide, according to a local think tank Wednesday.

Korea sets the maximum rate of the corporate tax at 25 percent -- imposed on taxable income of large business entities like Samsung -- as a result of a tax hike by 3 percentage points under the former Moon Jae-in administration, while that of Taiwan stood at 20 percent at most, according to the Korea Economic Research Institute.

The KERI, a think tank owned by Korea‘s lobby group Federation of Korean Industries, added that the incumbent Yoon Suk-yeol administration’s proposal to cut the maximum rate by 3 percentage points will not be in effect until next year.

Samsung Electronics is also incurring 144 million won ($110,000) in cost per hire each year, compared with that of TSMC at 95 million won, added KERI‘s estimate. The pool of new chip-related talent is growing slower in Korea than Taiwan, as colleges dedicated to semiconductor technologies in Korea now nurtures 1,400 students each year, which is greatly outnumbered by Taiwan’s 10,000.

As for utility costs, Samsung pays 719 won per metric ton of water, up nearly 50 percent from what TSMC has to pay. But the electricity cost was more than 20 percent higher for TSMC than Samsung, as Samsung paid 110.5 won per kilowatt-hour.

“Infrastructure support in line with that of semiconductor industry leaders is a prerequisite for Korean chipmakers to address growing competition to achieve semiconductor tech supremacy,” noted Lee Kyu-seok, a researcher at KERI, adding that the government‘s efforts to alleviate the tax burden on the corporations and foster chip engineers are imperative.