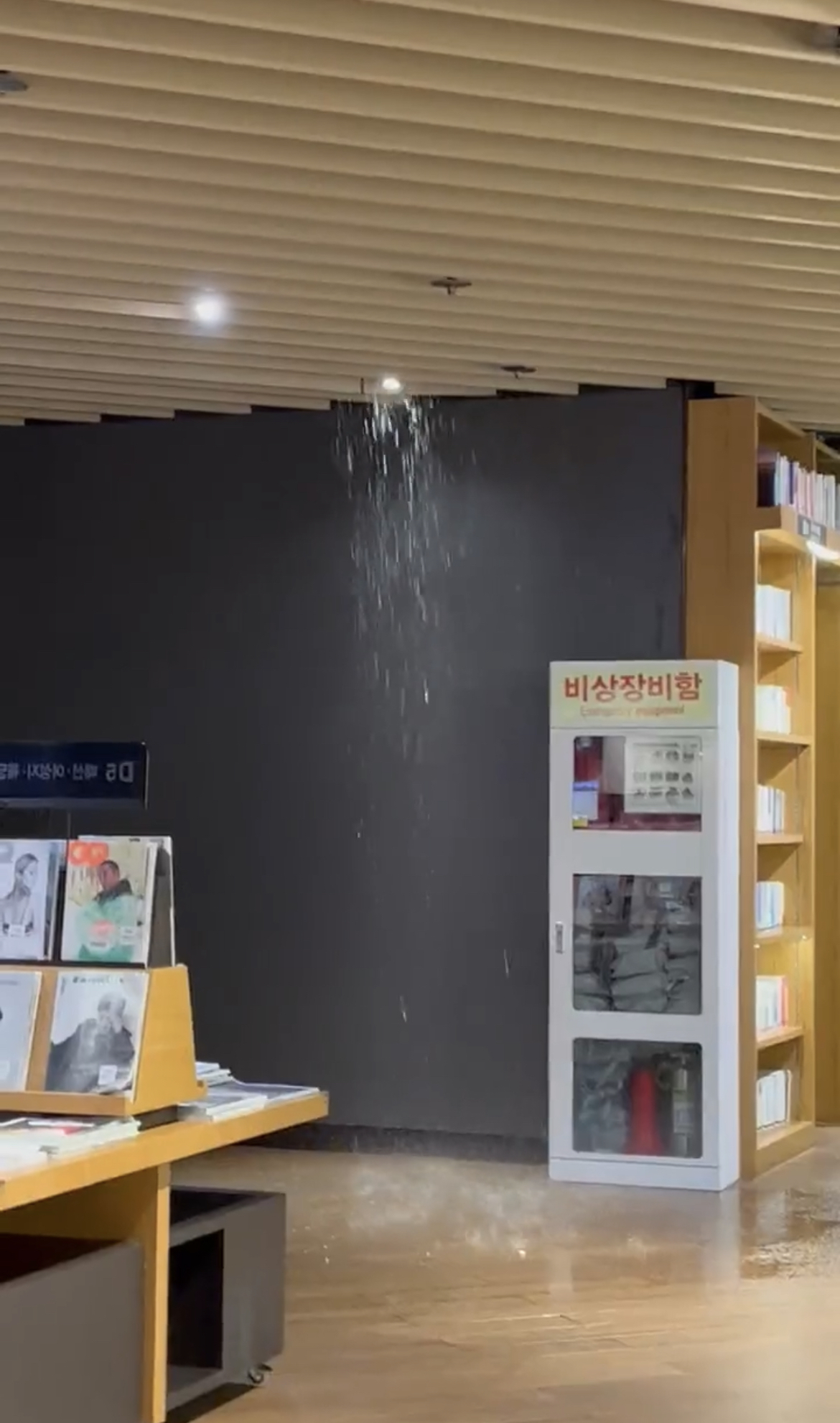 Gangnam Severance Hospital in Gangnam-gu, one of the largest hospitals in Seoul, was submerged last night, with water cascading down the underground levels where restaurants, cafes, pharmacies and MRI rooms are located. Hospital staff scooped up water all night in front of MRI rooms to protect the medical devices inside.

Water started pouring in from the restaurant area, but luckily it did not damage the medical equipment, the hospital said, adding that it is providing medical services as usual.

Stores in Shinsegae Central City in Seocho-gu, Gangnam-gu, which is connected to the Express Bus Terminal Station, were flooded. The stairways, chairs and tables outside of underground restaurants and cafes were submerged in floodwater, according to sources.

“We have repaired the holes overnight and stores are now open for business as usual,” said an IFC Seoul official.

Video provided by Twitter user @tt_2411_
Also, the library area and a Starbucks at the Starfield Coex Mall, Gangnam-gu, were bombarded with rainwater from both Samsung Station Line No. 2 and Bongeunsa Station on Line No. 9.

Leakage from the ceiling soaked books on display at the mall, forcing workers to save books from getting wet until midnight.

Market Kurly has notified some of their customers that their early delivery packages, which are usually shipped before 7 a.m., would be delivered after 9 a.m.

Delivery app Yogiyo shut down its service in certain districts, including Gangnam-gu, Seocho-gu and Gwanak-gu.

In addition, the worst rainfall had shut down the data system of Korea Investment and Securities, reportedly causing financial losses as some investors were not able to trade foreign stocks at night.

The third, fourth and fifth floors of the brokerage firm’s headquarters, located in Yeouido, were flooded with water, which froze mobile and home trading systems for 15 hours starting from 4 p.m. Monday. While refraining from connecting the system malfunction to the flood, the company said it would compensate customers claiming financial losses.

The Seoul National University library and college buildings located in Gwanak-gu, southern Seoul, were battered by heavy downpours and reported to have been severely flooded on Monday. The inside of Kwanjeong Library was flooded, with water pouring down the stairs. The electricity in the building had temporarily gone out, causing inconvenience to the students inside.

A bus stop sign, which had been placed near Poongsan-madang, had been moved 180 meters to Doosan Humanities Hall during the heavy rainfall. Roads penetrating the campus collapsed, according to students who requested not to be named.

“There were minor issues at some sites in the central region, including Seoul, but there was no damage that could interfere with the process or operation of the site. Officers in each region are frequently checking the situation,” said an official from the construction industry.

The construction unit of Samsung Group Samsung C&T reported that the rain at work sites were concentrated at night during off hours, and that there was no major problem with field work.

General manufacturers are also working without a hitch.

South Korean battery material firm LG Chem, which has major production facilities situated in the southern part of the country, reported that their site had not been affected by the rain.

“There has been no significant damage, but we are preparing for upcoming damage by checking the drainage condition of rainwater and deploying pumps in the habitually flooded sectors,” said an official from LG Chem.

Tech giants Samsung Electronics and SK hynix, which have production lines in Pyeongtaek and Icheon in Gyeonggi Province, also did not incur heavy damage from the natural disaster.

Although heavy rain and lightning had caused power outages in some areas of Gangnam-gu and Seocho-gu, affecting wired services temporarily, telecommunications companies said this had not led to a suspension of service.

The Ministry of Agriculture, Food and Rural Affairs said Tuesday afternoon that crop damage across the country induced by the flood was insignificant, with a total of five hectares of farming land reported to have been damaged.

According to the ministry, a total of 440 millimeters of rain had fallen on the metropolitan area, Gangwon and Chungcheong Provinces for two days from Monday to Tuesday. So far, one hectare of rice paddies in Cheolwon, Gangwon Province and four hectares of a cucumber farm in Pocheon, Gyeonggi Province, have been flooded. Landslides have also occurred in Seongnam, Gyeonggi Province.

Although the damage to the agricultural sector is not significant, up to 300 millimeters of rain along with strong winds are expected to fall on the central region, North Jeolla Province and North Gyeongsang Province for the time being. Related damage in these areas are expected to expand.

“The measures to help address inflation and farm damage caused by heavy rain will be decided based on the situation after the rainy season,” said an official from the Ministry of Economy and Finance.