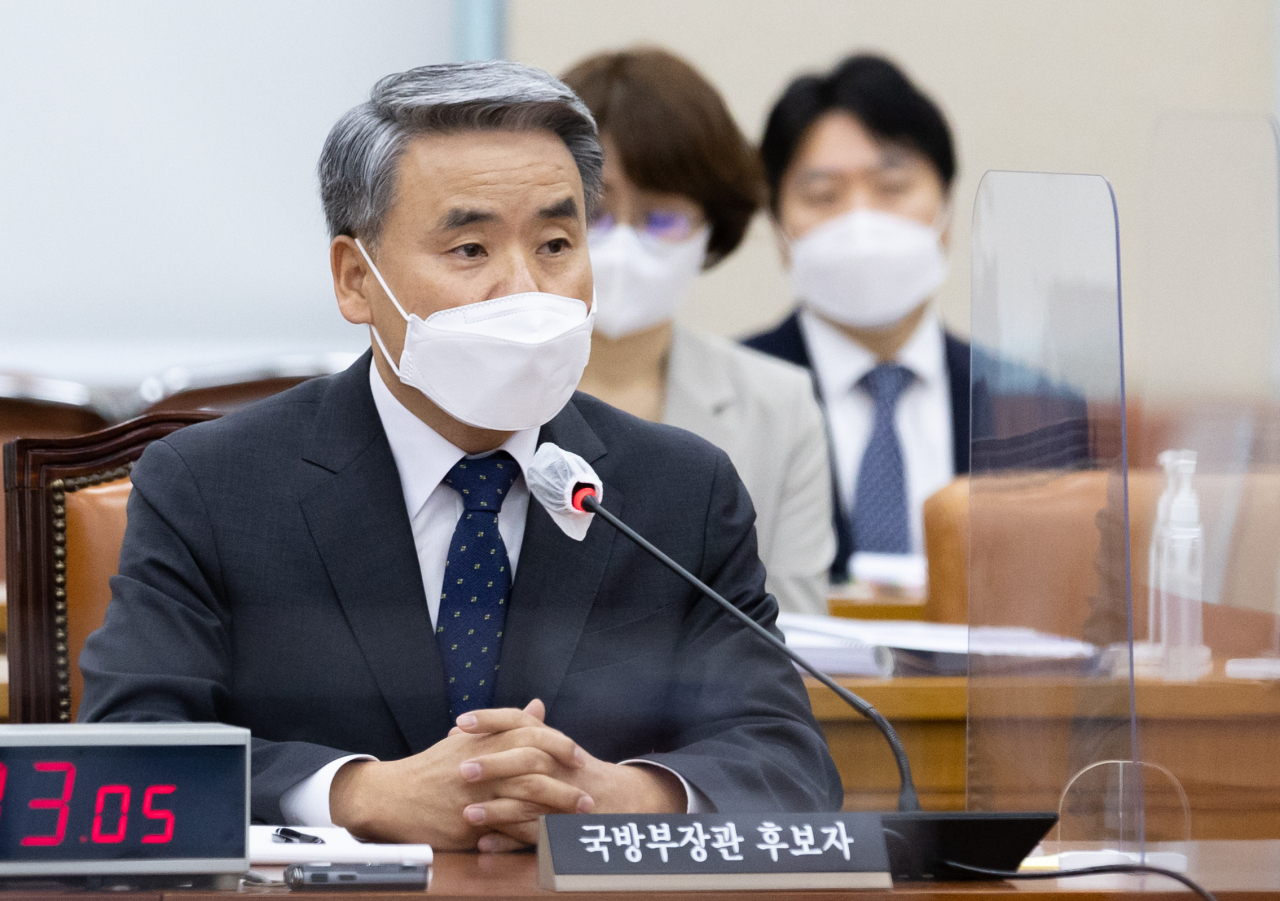 This photo, taken on May 4, shows then Defense Minister nominee Lee Jong-sup attending a parliamentary confirmation hearing at the National Assembly in Seoul. (Yonhap)

South Korea's defense ministry vowed Friday to push for an early deployment of a counter-rocket system to fend off threats from a possible North Korean salvo mixing missiles and long-range artillery that put the greater Seoul area within range.

During a policy briefing to President Yoon Suk-yeol, Defense Minister Lee Jong-sup outlined the plan and other defense priorities, including resuming larger-scale South Korea-US field training and accelerating efforts to build the "three-axis" system against the North's evolving nuclear and missile threats

The push for an artillery interception system came amid lingering concerns over whether the South is fully ready in the event of the North firing multiple shots involving different missiles and artillery pieces.

It added the system will be "critical in effectively responding to a possible North Korean salvo of missiles and long-range artillery."

South Korea has been working on acquiring the counter-rocket system, called the low altitude missile defense (LAMD). The Defense Acquisition Program Administration plans to complete its development by 2028, but Yoon has expressed his desire for its rollout in 2026.

In line with air defense efforts, the ministry stressed its resolve to secure an "overwhelming" three-axis system.

It consists of the Kill Chain pre-emptive strike platform; the Korea Air and Missile Defense system; and the Korea Massive Punishment and Retaliation (KMPR), an operational plan to incapacitate the North Korean leadership in a major conflict.

For the Kill Chain portion, the minister pointed out Seoul's move to secure military surveillance satellites and 20 additional F-35A radar-evading fighters -- key assets for the detection of enemy attacks and preemptive strikes in a contingency.

On the KMPR segment, he vowed to expand the number of "high-power, super-precision" missiles, and further strengthen infiltration and strike capabilities of the nation's special warfare operations units.

In the briefing, the ministry also revealed its plan to resume regiment-level or larger-scale combined field training programs between the South and the US, including aircraft carrier strike drills and amphibious landing training.

Those training events were suspended in 2018 amid efforts by the then Moon Jae-in administration to facilitate diplomacy with Pyongyang.

"(The ministry) will push to fundamentally strengthen South Korea-US combined defense posture by normalizing allied exercises and training that had been cancelled, delayed or scaled back and adjusted," the ministry said.

The UFS consists of the computer simulation-based command post training, field maneuvers and Ulchi civil contingency drills -- a makeup tantamount to a revival of the Ulchi Freedom Guardian drills abolished in 2018.

As part of efforts to beef up the allied drills, the South and the US plan to stage 11 combined field training sessions between August and September, including a brigade-level program at the Army's Korea Combat Training Center in Inje, about 120 kilometers east of Seoul.

The rare unveiling of such detailed combined training programs appears to reflect the allies' determination to step up deterrence against North Korean threats.

Yoon asked the minister to conduct "thorough" exercises and training, including by normalizing field maneuvers, and to hold the UFS training in a substantive way, his spokesperson Kang In-sun told reporters.

"He also called for utmost efforts to form a tight and effective missile defense system against North Korea's nuclear threats," she said.

The ministry also underscored its resolve to nurture a military based on cutting-edge technologies, like artificial intelligence (AI), which is at the center of the armed forces' efforts to construct a combat structure employing both manned and unmanned assets.

In line with such efforts, the ministry plans to launch the defense AI center by 2024.

In cooperation with local universities, the ministry also plans to nurture around 1,000 AI specialists over the next five years.

On the education segment, the ministry said it plans to strengthen efforts to ensure troops are clearly aware of who the "enemy" is -- in an apparent reference to North Korea's persistent security challenges.

Yoon called for full engagement with the AI program and the strengthening of digital and cyber education at military academies and institutions, according to his spokesperson.

He also asked the minister to help fulfill his election promise to raise soldiers' monthly salary to 2 million won ($1,522) and to strive to develop the defense industry into a key export sector, Kang said. (Yonhap)