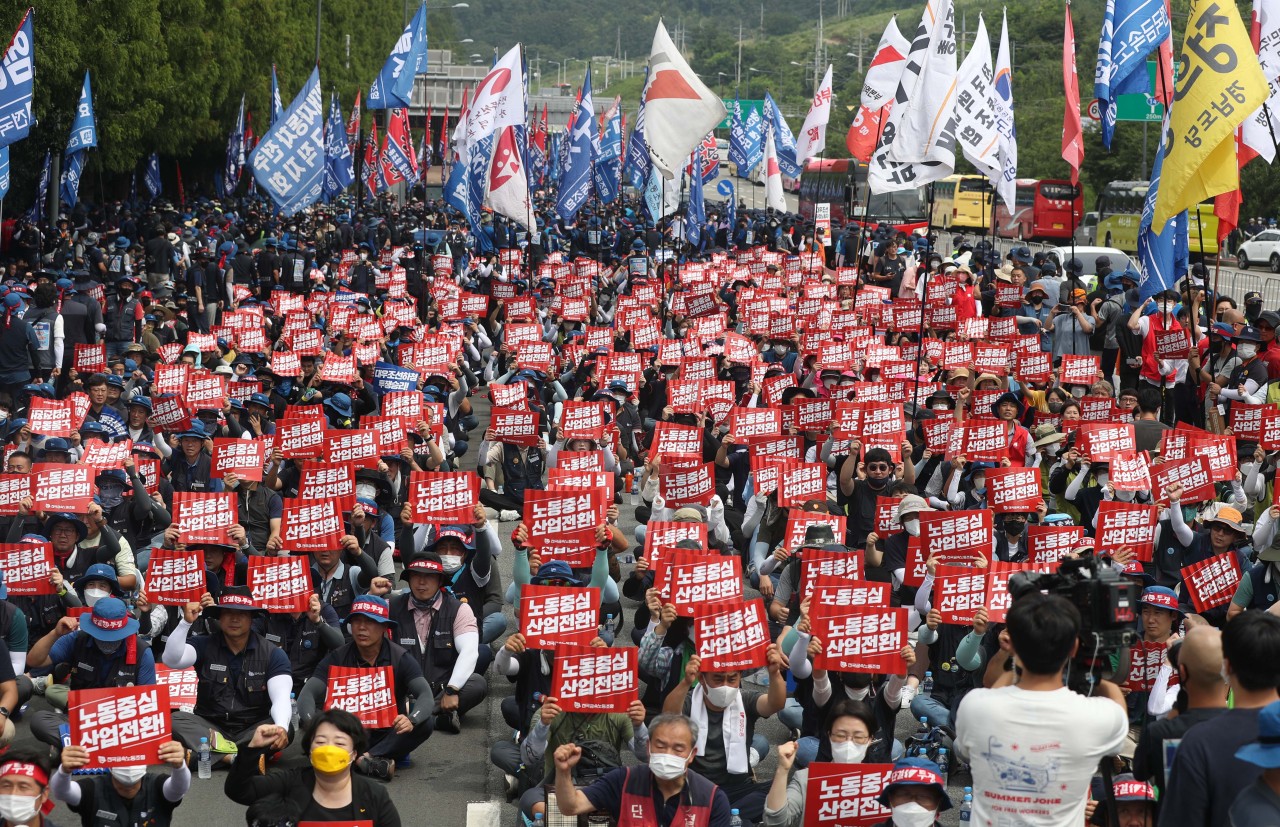 Although Yoon’s tone was more cautious than his earlier remarks that hinted at the use of force two days ago, he still reiterated suspending the occupation of the company’s shipyard in Okpo, South Gyeongsang Province, by seven striking workers.

“Resolving and normalizing illegal activities quickly is what everyone wants, and doing so helps everyone,” Yoon said when asked by a reporter on his way to work.

Earlier, he said, “When it comes to industrial sites and labor-management relations, illegal actions by either labor or management should not be left unattended or tolerated,” when a reporter asked about the possibility of using force.

Labor-management wage negotiations for about 5,000 unionized Daewoo Shipbuilding & Marine Engineering subcontractors have been wrangling over an agreement, with the strike lasting 50 days.

Negotiations were held from 11 a.m. on Wednesday to resolve the strike, but it ended at around 11:20 p.m. without concluding. It resumed again on Thursday.

Although most of the opinions on the guarantee of wages and labor rights were reached, they failed to reach a consensus on compensation for damages. Initially, the union demanded a 30 percent pay increase to restore pay to levels before they were cut in 2016, but recently agreed to a 5 percent raise. And the management reportedly formed a consensus on the guarantee of labor rights that the union wanted.

DSME estimates that it lost 289.4 billion won ($220 million) by the end of June due to the industrial action. If the strike continues until the end of July and August, losses could surge to 816.5 billion won and 1.3 trillion won, respectively.

In the midst of this, conflict continues among workers.

The Korean Confederation of Trade Unions, a major umbrella labor group, marched to the west gate after holding a rally in front of the main entrance of DSME in Geoje, South Gyeongsang Province, at around 2:30 p.m. on Wednesday.

Around the same time, more than 4,000 employees of DSME and its subcontractors also marched to the west gate after holding a rally calling for the suspension of strikes and the normalization of operations by subcontractors.

The two sides, facing each other in front of the west gate, exchanged insults and shouted at each other at a distance of 20 meters, but no physical conflict occurred as the police and DSME blocked the west gate.