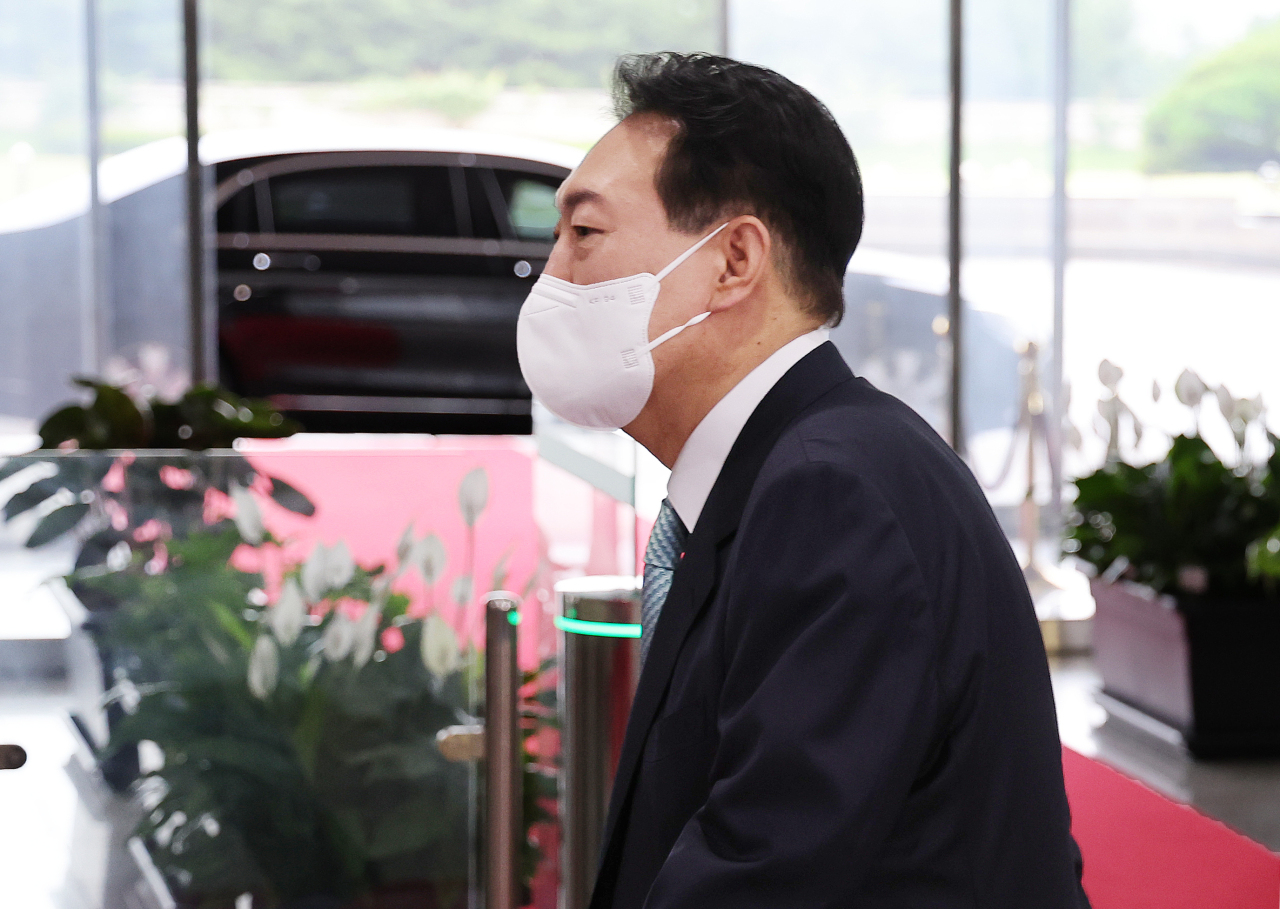 It has been little more than two months since Yoon took office. But his support ratings have continued to decline, spurred by multiple controversies, including in personnel appointments, Yoon’s occasional gaffes and continuing to put blame on the previous government, as well as party struggles amid a lack of concrete policy visions for people’s livelihoods, economy and diplomacy.

National Intelligence Service chief Park Jie-won said in a radio interview Wednesday, “It is inevitable that there will be a personnel reshuffle of the ruling party and the government,” in relation to Yoon’s approval rating falling to the 30 percent level already.

At a time when controversies linger surrounding personnel appointments and the internal strife of the ruling party, he asked, “Where is the chief of staff in the presidential office? What is the chief of political affairs doing?”

Park Hong-keun, floor leader of the main opposition Democratic Party of Korea, also blamed “six ex-prosecutors” who dominate the power of the presidential office in a speech at the National Assembly.

President Yoon declined to comment on Park’s remarks, replying, “Does the president need to comment on the opposition politician’s remarks?” when asked by a reporter on his way to work Thursday morning.

Criticism of the presidential office is also cautiously emerging even within the ruling bloc.

Kim Jae-won, a former supreme council member of the People Power Party, pointed out that the steep decline in President Yoon’s approval rating was the staff’s fault.

Political commentator Park Sang-byoung said more than half of the reasons for the drop in approval ratings are related to Yoon himself, meaning his lack of political capacity and controversies surrounding him and his spouse.

“But we cannot change the president,” Park said. “So he needs to be changed through his staff -- who can give good and honest advice,” adding that none of his five secretaries play such a role currently.

“The presidential chief of staff has the least presence. The public affairs team only blames others and the previous administration. Policy-related secretaries offer little vision amid urgent issues such as livelihood issues, economic issues and foreign affairs,” he said.

Although it would be rare for the president to reshuffle the Cabinet just two months after the inauguration, the two former conservative administrations of Lee Myung-bak and Park Geun-hye changed staff within a short period after controversy emerged.

Lee brought out personnel reforms a little more than 100 days after taking office upon the failure of personnel appointments and candlelight vigils against further negotiations on the Korea-US free trade agreement. On June 20, 2008, 117 days after his inauguration, he replaced a presidential chief of staff and seven senior officials. His approval rating, which had fallen to 16.9 percent, soon rebounded to 35.2 percent.

As for Park, her chief secretary and four other secretaries resigned five months after she took office to take responsibility for the sexual scandal of her spokesperson, Yoon Chang-jung.