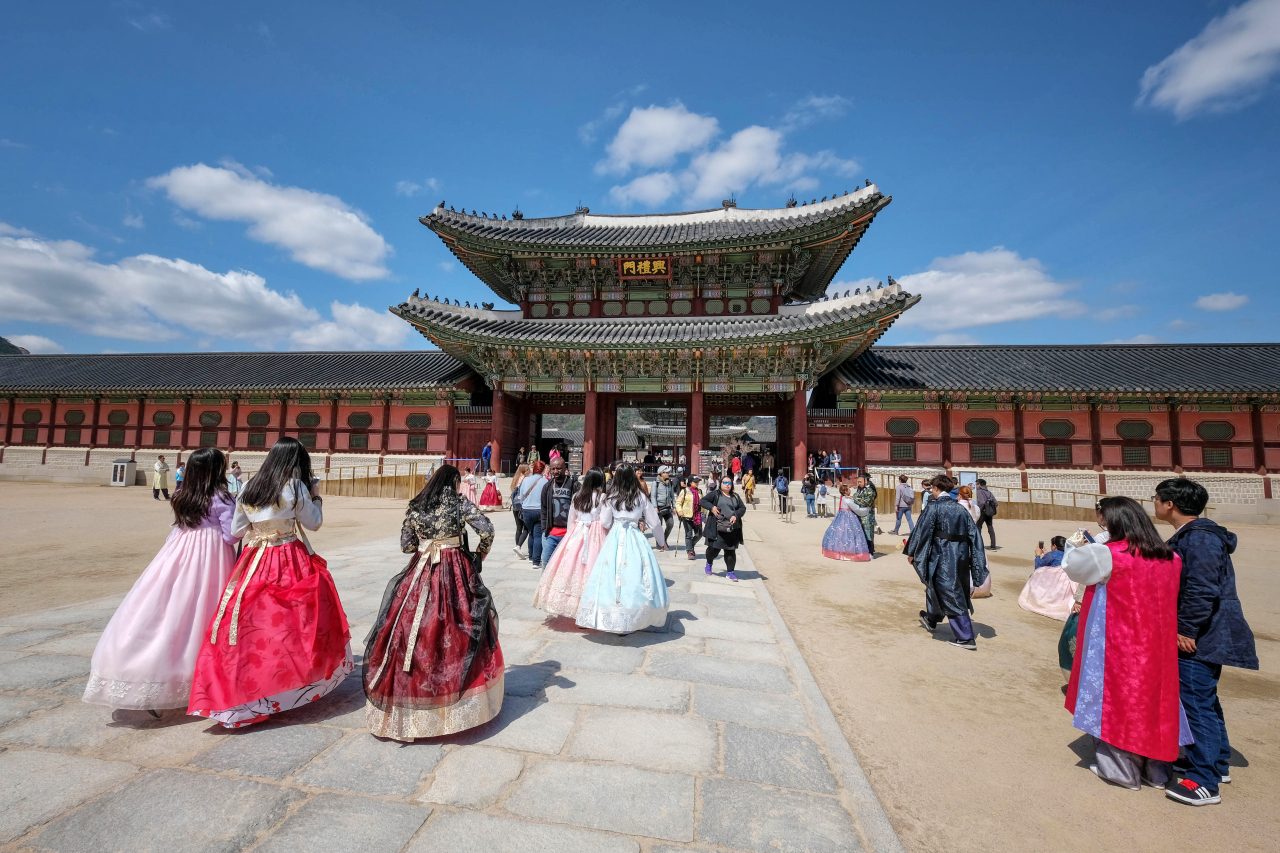 Tourists wearing rental hanbok are seen at the Joseon period royal palace Gyeongbokgung, Jongno-gu, Seoul. (123rf)
A serene, hundreds-year-old royal palace surrounded by a wall of shiny skyscrapers is one of the most iconic images of Seoul.

On any given day, these palaces are visited by throngs of tourists -- both foreigners and locals -- dressed in hanbok, the traditional Korean attire, thanks largely to nearby rental shops offering the costume at only about 30,000 won ($23) for a full day on average.

But not all are happy with the craze for rental hanbok.

The issue is the design. Purists frown on rental costumes’ exaggerated aesthetics and the omission of key traditional elements.

But others say they are OK with the modifications, as they seem to be adding to the popularity of hanbok. They say contemporary Koreans have lost touch with hanbok, especially in their original form, as they are only worn on special occasions such as weddings. 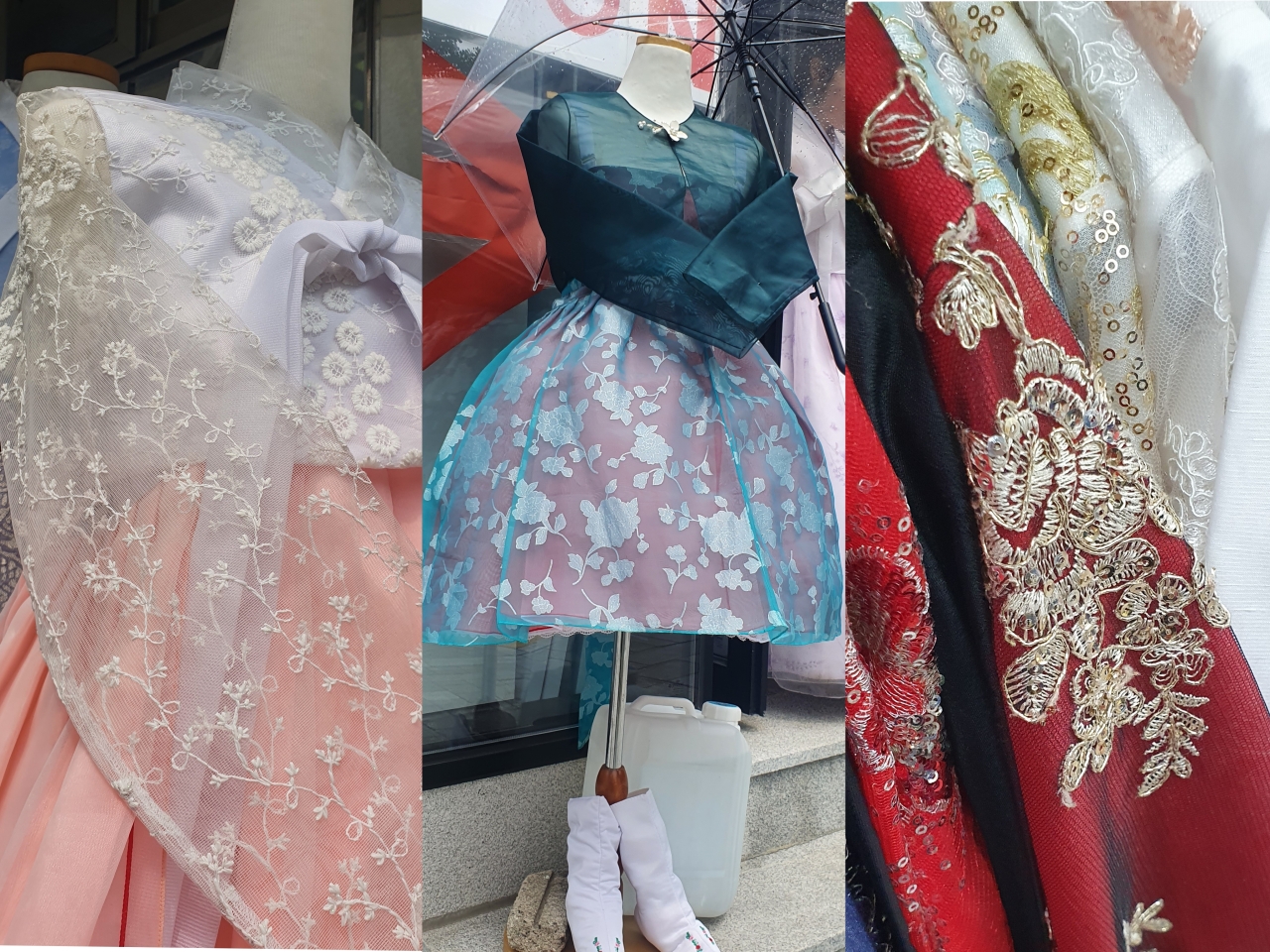 A typical rental hanbok dress boasts pastel or vivid colors with extravagant ornaments to make it more photogenic. On top of the use of ribbon, lace and glitter, these dresses are worn with oversized petticoats to make the skirts fuller, contrasting with the free-flowing silhouette created by an authentic hanbok.

A rental shop owner near a hanok village in Jeonju, North Jeolla Province, admitted rental hanbok were heavily modified but defended them as necessary.

While a perfectly-recreated hanbok dress would feature a billowing, lengthy wrap skirt cinched tightly around the chest with a short jacket and layers of undergarments, contemporary design allows for a more comfortable fit, they say.

“Our products are all handmade, but in terms of design, we have to adopt colorful, fancy styles so that young tourists want to wear them and take selfies in them. They’re different from traditional ones but are easier to wear, manage and profit from,” said the shop owner, who wished to be identified by the surname Kim.

Shin Yoon-ji, a 23-year-old customer, said she has no issue with the way rental hanbok look.

“If people are satisfied with them, it’s fine. But I personally don’t find excessively altered hanbok attractive,” she said.

A tourist surnamed Kim disagreed. Rental hanbok gives the wrong impression to foreign visitors, and that could be a problem, she said.

A 26-year-old college student surnamed Song likened rental hanbok to “fusion Korean food,” which has been altered to make it more accessible to those who are not familiar with the authentic version.

“But I do think rental hanbok should be distinguished from traditional hanbok,” Song added. 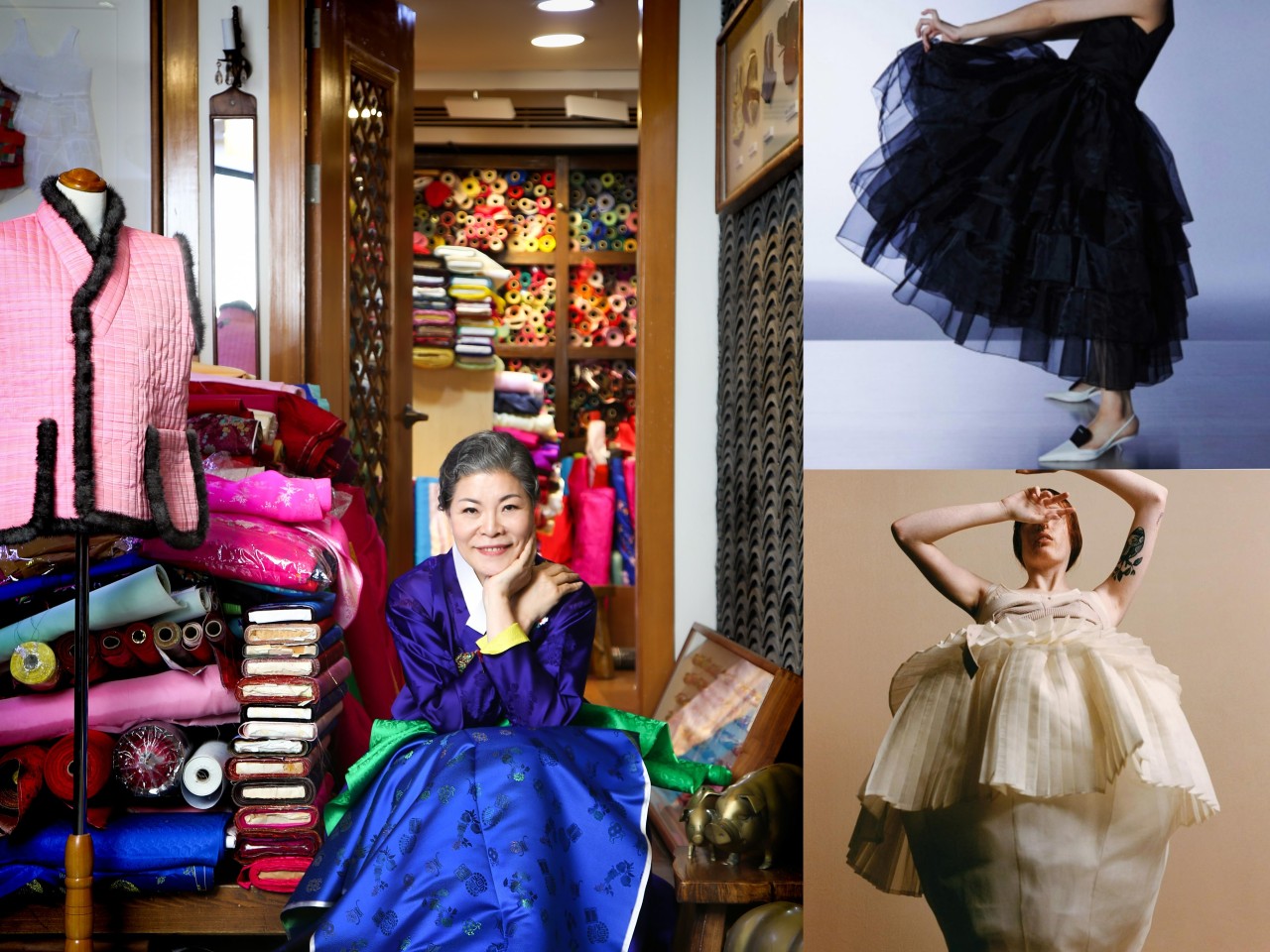 Hanbok designer Park Sul-nyeo (left photo) and works of contemporary hanbok designer Moonaq (right) (Park Sul-nyeo Hanbok / Moonaq
Experts, too, have mixed feelings about the popularity of rental hanbok. Some called for action to be taken to preserve traditional hanbok.

Younger generations’ lack of exposure to traditional hanbok is the root cause of the problem behind the mutated designs, she said. “Rather than blaming rental hanbok shops, we need to contrive new methods to narrow the gap between traditional hanbok and a popular taste,” Kwon added.

Hanbok designer Moonaq agrees with both sides of the rental hanbok debate and called for more support and effort – some from the government -- to popularize high-quality, modernized hanbok.

Park Sul-nyeo, a designer who had dedicated 44 years to hanbok, said, “I painfully came to admit that rental hanbok is also a trend, but even with that, we have to secure the fundamental components of hanbok at the very least. I’m not saying we should wear a museum-artifact-level hanbok, but I just want hanbok to be like hanbok.”