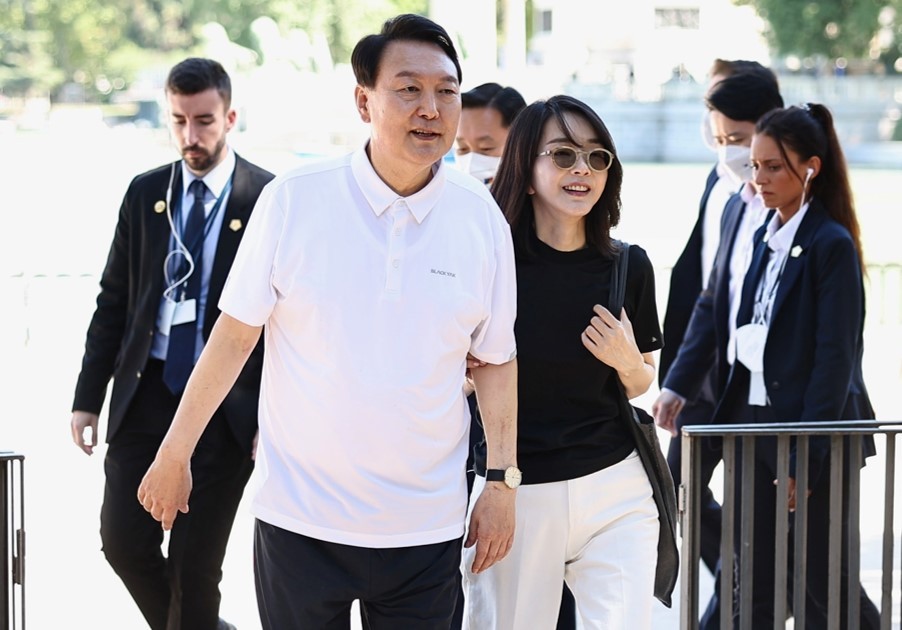 President Yoon Suk-yeol takes a walk around a hotel with Kim Keon-hee during the NATO summit in Madrid, in this photo released by the presidential office on July 3. (Yonhap)

Controversy is again brewing over the first lady, as an acquaintance of hers was found to have been among the president’s retinue at the NATO summit last week. The presidential office denied any wrongdoing.

According to local news media reports that broke late Tuesday and into Wednesday, a person not belonging to the presidential office was part of President Yoon Suk-yeol’s delegation in Madrid. The person, surnamed Shin, left for Spain five days earlier than the president and returned home aboard the presidential plane with Yoon, his entourage and reporters. The costs of Shin’s trip to Spain -- air fare and accommodation -- were covered by the presidential office.

The presidential office later explained that in Spain, she stayed at the same hotel as the president and first lady, to help the first lady with her schedule and duties. She also participated in planning an event hosted by the office.

Shin is the wife of Lee Won-mo, Yoon’s personnel secretary. Shin is an old acquaintance of Yoon and his spouse Kim, according to the presidential office. Lee is a former prosecutor who was part of an investigation into the alleged manipulation of the economic evaluation of Wolseong Nuclear Power Plant No. 1. After retiring as a prosecutor, he joined Yoon’s camp and has been in charge of personnel verification at the transition committee.

After the news broke, the presidential office explained that she participated in the trip because she was an old acquaintance of Yoon and his wife, so she understood the president’s will and intentions well. The office added it provided her with flights and accommodation only, without any other remuneration.

The office claimed that Shin has diverse experience in organizing international events, though it didn’t specify which.

Critics and the opposition Democratic Party of Korea voiced concerns about the continued participation of Kim’s acquaintances at official events, including her visit to Bongha Village.

Kim was embroiled in controversy last month when she visited late President Roh Moo-hyun’s grave in Bongha Village, South Gyeongsang Province with another acquaintance unaffiliated with the presidential office. At the time, President Yoon said that the person was “an old friend” of his wife’s, and that this friend had helped carry the bread his wife had bought for Roh’s widow Kwon Yang-sook.

“Visiting Bongha Village is not a national event, but all kinds of secrets are exchanged on the plane to the (NATO) summit,” Woo Sang-ho, leader of the main opposition Democratic Party’s emergency committee, said in a local radio interview on Wednesday.

“The first lady, who does not take seriously the issue of depending on acquaintances and having them accompany her (to official events), could become a national problem,” Woo said.

Woo added that this issue should be “formally raised and discussed” at the National Assembly.

“It is totally inappropriate,” said Yu Yong-wha, an invited professor at the Hankuk University of Foreign Studies.

“Kim Keon-hee seems to think she has taken power. That’s why I think she is acting without common sense,” the political commentator said.

“Kim seems to be trying to personally utilize presidential power granted by the people,” he said, adding that this was provoking a sensitive reaction from the public.