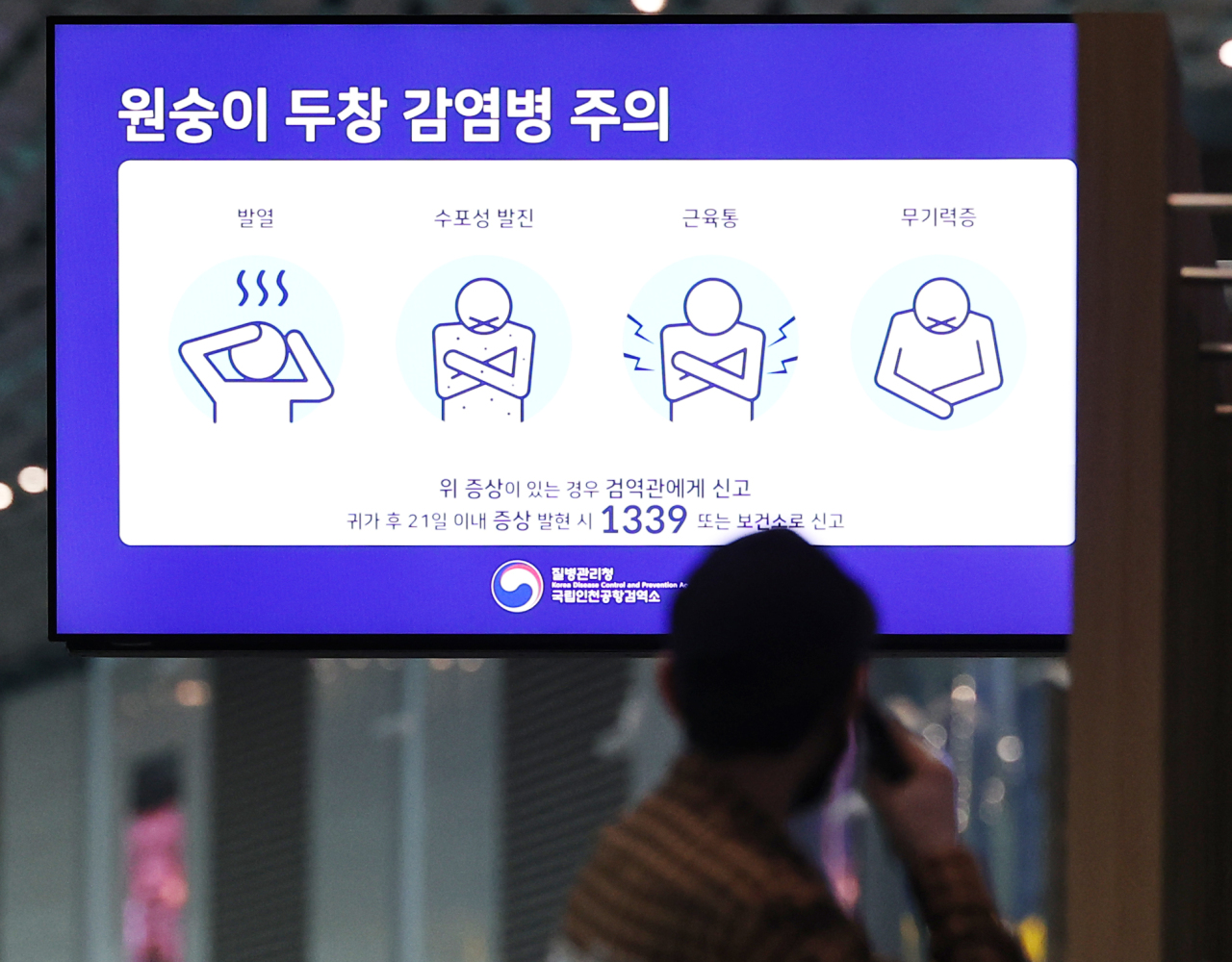 A sign shows symptoms of monkeypox at Incheon International Airport on Thursday. (Yonhap)
South Korean companies are dashing to develop diagnostic kits for monkeypox as the country confirmed the first case of the rare infectious disease last month.

A number of firms that had success with the development of COVID-19 diagnostic kits in the earlier days of the pandemic, including Bioneer, Boditech Med, Genes Laboratories, Seasun Biomaterials, Seegene and Wells Bio, have already developed testing kits for monkeypox.

According to companies, most Korean-made diagnostic kits can show the test results of monkeypox within 90 minutes or less.

More firms, including Humasis and Sugentech, have announced that they began the developmental process for monkeypox diagnostic kits with the aim of quick commercialization.

“More than 50 countries have reported over 5,000 confirmed cases of monkeypox across the world. Although the outbreak is not bad here, we are looking to obtain approvals overseas and export our products to other countries,” said an official at a diagnostic kit developer.

Monkeypox, which is usually found in central and western Africa, spreads through close contact. The virus can cause rashes, chills, fevers, headaches and muscle aches.

According to the World Health Organization’s statement on Friday, the number of monkeypox cases have tripled in the European region over the past two weeks.

Diagnostic kit developers may not have as much success as they had during the COVID-19 pandemic, according to industry watchers.

Citing health experts, an analyst at a local securities firm pointed out that the monkeypox outbreak has different implications from the COVID-19 pandemic.

“In the case of COVID-19, a highly infectious virus, the quarantine efforts were focused on testing many people as quickly as possible. But monkeypox, which is much less infectious, is unlikely to spread extensively in Korea,” the analyst told The Korea Herald.

He explained that developers of monkeypox diagnostic kits are trying to get a head start by securing the necessary technology before other companies so they can be in a better position once the global demand reaches a certain level.

The Korea Disease Control and Prevention Agency on June 22 confirmed the country’s first case of monkeypox. The KCDA said the patient was a Korean national who arrived at the Incheon International Airport from Germany.

The government raised the country‘s monkeypox risk level from attention to caution in efforts to step up measures against the spread of the virus. It also designated monkeypox as a second-degree infectious disease out of a four-tier system, the same category as COVID-19.

According to health authorities, the KDCA plans to import tecovirimat, an antiviral treatment, for 500 people before the end of this month.