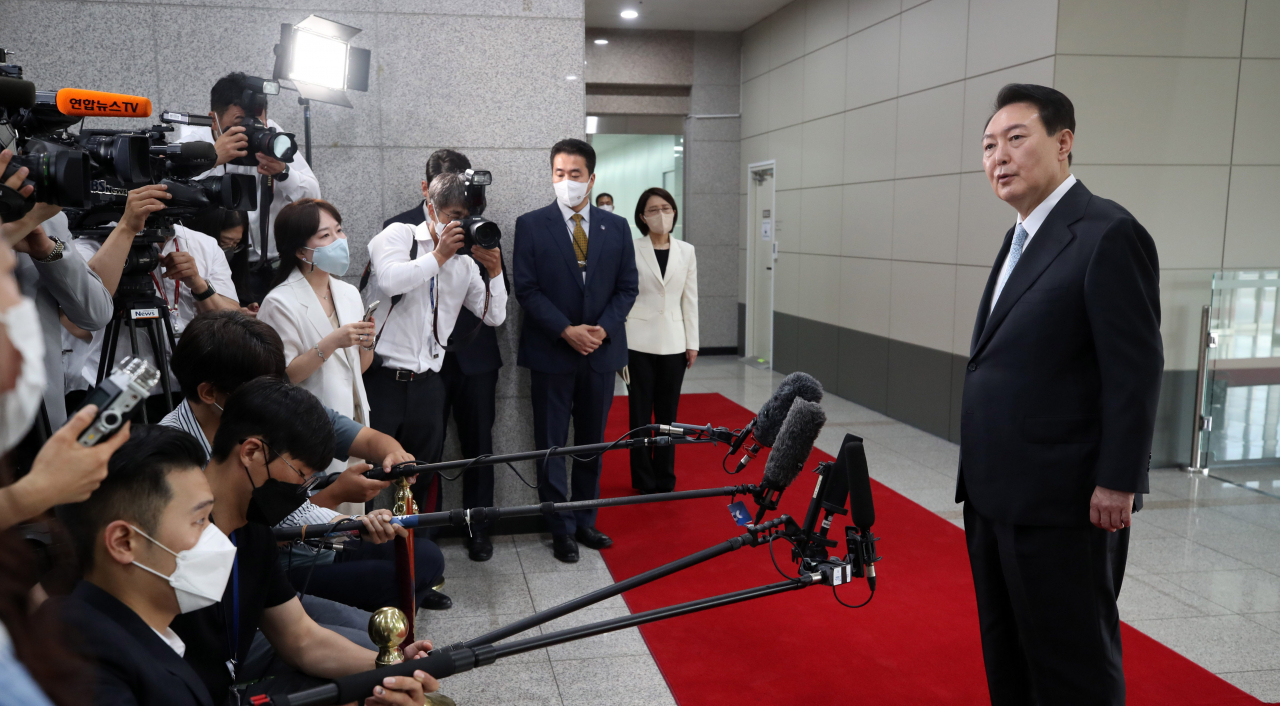 President Yoon Suk-yeol said Monday he will decide soon on whether to appoint his health minister nominee amid allegations she diverted political funds for personal use.

Kim Seung-hee is under investigation by prosecutors for allegedly using her political funds when she was a lawmaker to pay for her husband's car insurance and car rental fee in violation of the Political Funds Act.

The nominee has denied any wrongdoing, saying there was an accounting error.

"When it comes to the biggest requirement for an appointed public official, I think public officials are people who handle the bread and butter issues of the nation, and are responsible for the people's wealth," Yoon told reporters as he arrived at the presidential office. "So I think expertise and competence in their area of responsibility are the most important."

Yoon went on to claim the people chosen under his administration "can't be compared" with those of the previous Moon Jae-in government in that regard and from an ethical standpoint as well.

"But our government is different, so I will have discussions with my aides and colleagues, because the minister nominees need to get to work quickly, and I plan to make a decision quickly at any rate," he said.

The floor leader of the ruling People Power Party urged Kim to voluntarily resign as nominee.

"Given the National Election Commission's referral of her for investigation and suspicions revealed in the press, my personal view is that she should make a decision on her course of action voluntarily," Rep. Kweon Seong-dong told reporters.

The health minister is one of the last remaining positions to be filled in Yoon's first Cabinet.

Education Minister nominee Park Soon-ae has also yet to be appointed amid controversy over her past record of drunk driving.

Yoon is expected to press ahead with his appointment of Army Gen. Kim Seung-kyum as chair of the Joint Chiefs of Staff later Monday.

The appointments will be one of his most pressing tasks following his return from Spain last Friday, where he attended the North Atlantic Treaty Organization summit on his first overseas trip as president.

"Even during the campaign, I didn't pay much attention to approval ratings. It doesn't mean much," Yoon told reporters. "My work is for the people, and my only desire is to think solely about the people and work hard."