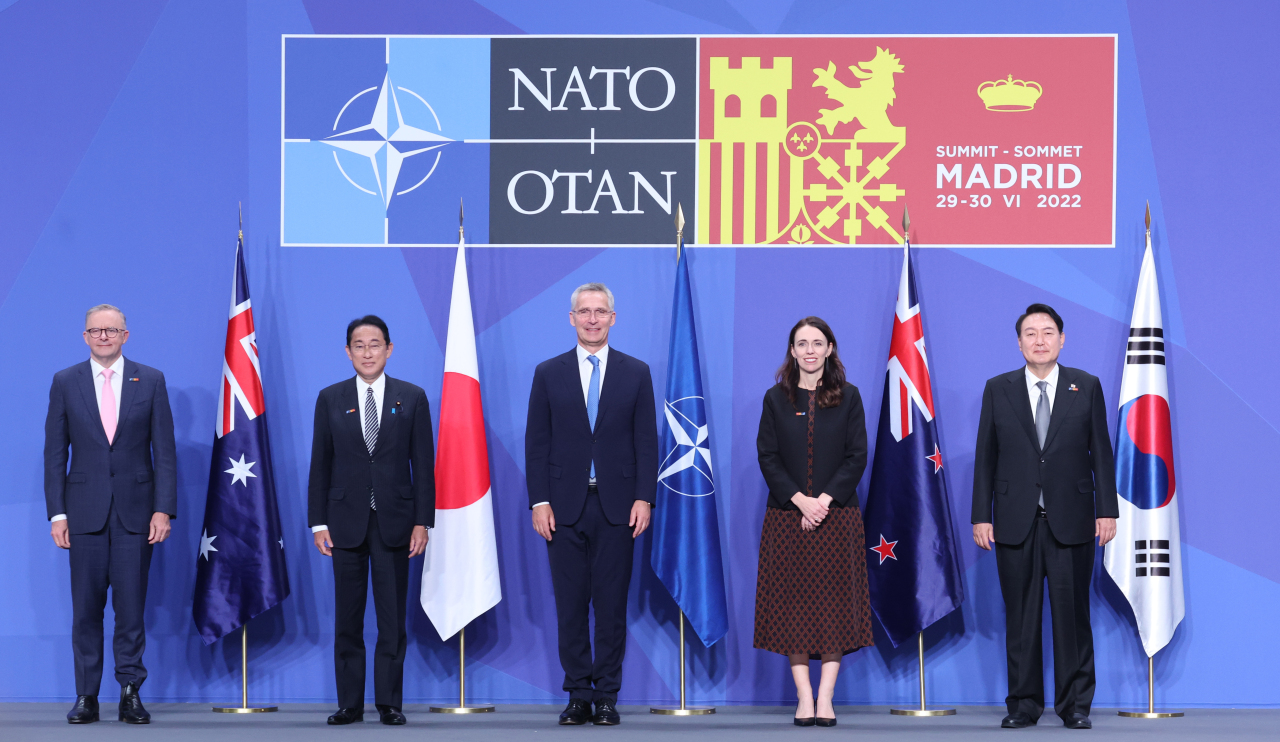 “As the Asia-Pacific value issue is inseparable from that of Europe and security issues in one region are amplified globally, we have reached the awareness that all countries in the global village must work together to solve the problems,” Kim Tae-hyo, the first deputy director of the National Security Office, told reporters in Madrid, where the NATO summit was held.

“President Yoon Suk-yeol has built friendships by exchanging conversations with the heads of more than 30 countries during the NATO summit, a welcome dinner and during the summit,” he said, adding that the first step in the summit diplomacy of the next five years was well put in place.

Another senior official at the presidential office, on condition of anonymity, said the Korea-US-Japan security cooperation has been “restored as of today.”

The trilateral talk was the first since the last was held on the occasion of the UN General Assembly in September 2017.

On Wednesday, the three leaders expressed concern about the North Korean nuclear threat and reaffirmed their will to jointly devise a strong deterrent against North Korea.

The senior official said the White House and US President Joe Biden also assessed the Korea-US summit as “historic” and “very successful.”

At the summit, the three nations did not discuss ways to tighten sanctions on North Korea, the official said, but added, “There seems to be a plan to expand sanctions on (certain) North Korean figures and institutions.”

“The remaining additional sanctions have been negotiated between the US and South Korea, but it is difficult to say now,” he said.

Asked if there was any mention of China, he said they only discussed security issues pertaining to the trilateral summit.

“Although China was not explicitly mentioned, all NATO allies, including South Korea, the US and Japan, have agreed that all international relations should be created in respect of universal and reasonable values and norms,” he said.

The parties agreed that “a minimum of a cooperative relationship is possible” if all countries stick to the rule of law and do not violate them.

For the first time, NATO’s “Strategic Concept” outlined that China’s policies challenge NATO’s interests, security and values. Earlier, news of Yoon’s attendance at the NATO summit drew scathing criticism from Chinese state media Global Times, in which it reported that “the Yoon administration gradually loses its diplomatic independence by relying on the US.”

“The international community recognized Korea’s capabilities in areas such as semiconductors, batteries, and nuclear power plants and proposed cooperation first,” Deputy Director Kim said. “It has become easier to build a global network.”

Summits and meetings with the Czech Republic, Canada, Spain and the UK were also scheduled for Thursday. At the NATO summit, he held pull-aside meetings with leaders of the European Union, Canada and Romania.

Most of them are crucial partners Korea relies on in terms of building supply chains and future technologies, the office said.

Choi Sang-mok, senior presidential secretary for economic affairs, said in a press briefing on Wednesday night that the attendance of the NATO summit is the “beginning of state-level sales diplomacy for new export-oriented industries.”

At the summit with French President Macron, they underscored the importance of nuclear power generation to realize efficient carbon neutrality and agreed to expand cooperation to strengthen the competitiveness of the nuclear power industry, the presidential office said. The two countries also discussed cooperation in the space industry, including developing small and medium-sized satellites.

With Poland, the two countries agreed to expand cooperation in energy and defense, a sign that the European nation could procure Korean weapons soon.

“I think this will be the first achievement of the sales diplomacy (at the summit),” Choi said.

Separately, Korea has also bid on a tender to build a nuclear reactor in the Czech Republic, and the winner is expected to be selected soon.

“We plan to make all-out efforts to win orders for nuclear power plants in Poland and the Czech Republic,” an official from the presidential office said.

Yoon also embarked on diplomacy to strengthen supply chains such as semiconductors, batteries and core minerals with the Netherlands.

According to Yoon’s office, he told Dutch Prime Minister Mark Rutte: “We expect companies such as ASML to contribute to the establishment of a stable supply chain in Korea.” ASML is the Dutch manufacturer of core semiconductor production equipment. Samsung Electronics Vice Chairman Lee Jae-yong also recently visited ASML in the Netherlands.

Economic Secretary Choi added that he sees Europe and South Korea’s industrial structures developing in tandem with each other, as the two regions foster further supply chain and technology cooperation.