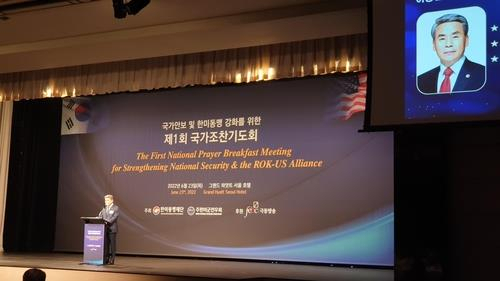 Defense Minister Lee Jong-sup speaks during a breakfast meeting with former and current South Korean and US officials at a hotel in Seoul on Thursday. (Yonhap)

He was speaking at a breakfast meeting with former and current South Korean and US officials, as concerns have grown about the possibility of the North carrying out its seventh nuclear experiment at the Punggye-ri testing site.

"Due to the advances in North Korea's nuclear and missile capabilities, and its preparations for a seventh nuclear test, the security situation on the Korean Peninsula is very grave," Lee said. "Our military will always strengthen the South Korea-US alliance further and firmly defend South Korea."

Park pointed out that the North's military capabilities are threatening peace not only on the Korean Peninsula but also in the world, and that the allies are working together toward the shared goal of the North's complete denuclearization ultimately for the sake of "sustainable peace."