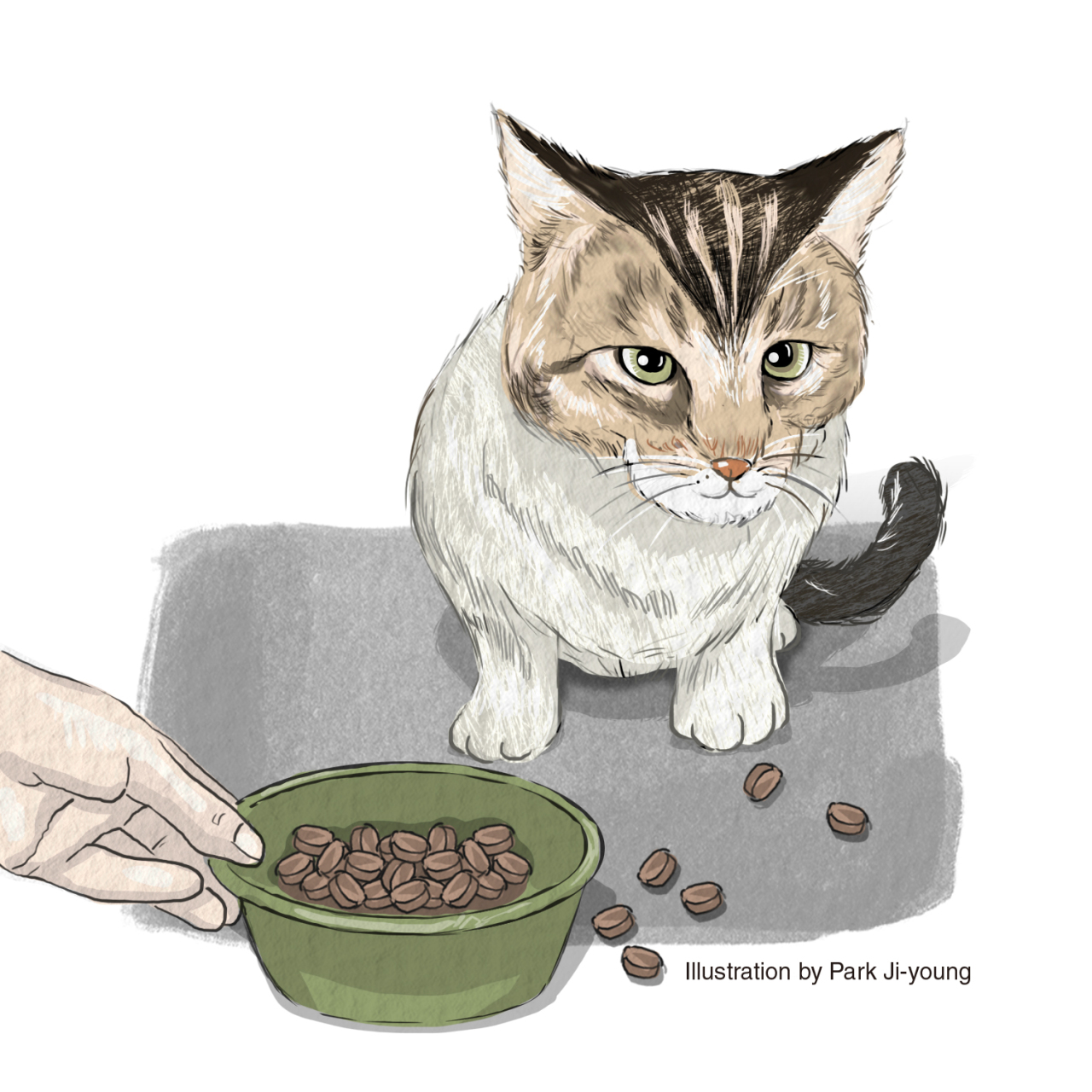 Venturing into a narrow street of Nogosan-dong, western Seoul, one would stumble across a quiet neighborhood cluttered with small houses. Some of them have small trays laid out in front, one with a sign that reads, “A small diner for stray cats. Our regulars will briefly visit for a meal and be on their way. Please turn a blind eye to them.”

Ask any Korean who they are, and the answer will probably be the same, “cat moms.”

It’s a term widely used to refer to people -- mostly women -- who provide food and shelter for feral cats. They are a subject of heated debate in Korea, as their love for stray cats often leads to conflicts with neighbors over noise and perceived public health risks associated with the furry felines. 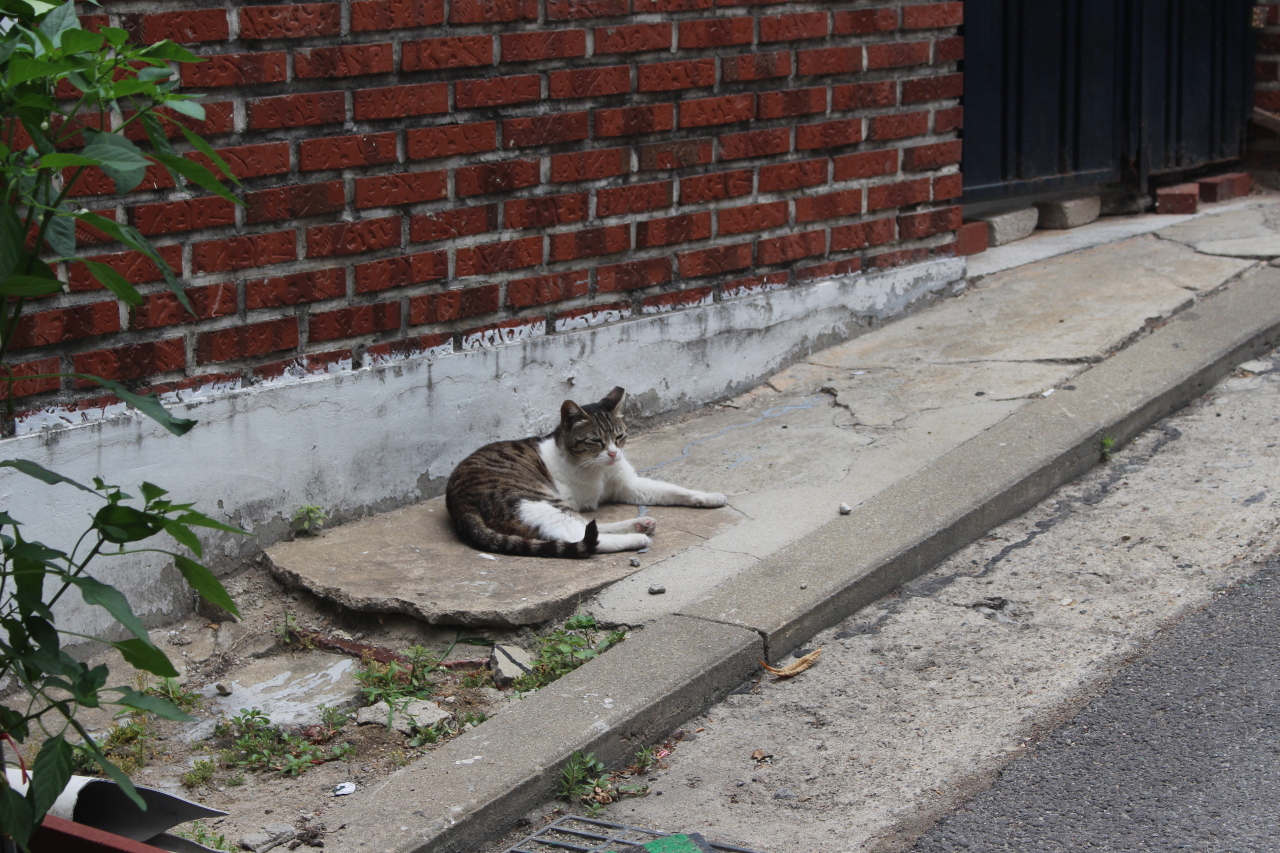 A stray cat in Nogosan-dong, Seoul sits beside a wall of a home. (Yoon Min-sik/The Korea Herald)
Cat moms vs. neighbors

Cat moms are a mixed group, but some wayward individuals have been considered among the least desirable neighbors in Korea.

Recently, a post uploaded on an online community complaining about cat moms who have turned an apartment building’s basement parking lot into a home for a dozen stray cats went viral.

The post is accompanied by an image of a notice asking residents to take extra care not to disturb or hurt the cats while parking and asking those who dislike cats to park elsewhere.

The general online response was negative, accusing the author of the sign of valuing strays more than residents, while some said those responsible should keep their love for cats to themselves and raise them in their own homes as pets.

Last month, the Buk-gu District Office in Daegu waged a small war against illegal feeding stations for stray cats in public parks and green areas, which can result in fines of up to 5 million won ($2,300). Even in the aforementioned Nogosan-dong, where such an issue did not appear to be as serious, an illegal feeding station was found in an urban park next to what appeared to be a small pile of days-old cat feces.

“It’s appalling because they (cat moms) leave such a mess in public areas, and they don’t even clean up afterward,” said a 20-year-old college student named Lee, who resides near the said park.

“Honestly, I am a bit scared of cats. When they cry at night, they sound creepy like babies or women crying,” said Cho Min-jung, a teacher living in Anyang, Gyeonggi Province. Living in a newly-built apartment complex, there seem to be no feral cats yet in her neighborhood. “I just hope my neighborhood stays clear of cats and cat moms.”

Some people have stronger aversion to felines and their caretakers.

On June 6, a Busan court fined a man in his 60s 1 million won for causing bodily injury to a cat mom feeding stray cats. The man attacked the unidentified woman in a parking lot in Busan last year while yelling, “You shouldn’t feed stray cats!” and pushing her several times.

The woman had reportedly fed stray cats at the said parking lot for 3 1/2 years, and the accused claimed he had been “stressed” because of the noise the cats had been making every day.

Last year, a man was filmed destroying a feeding station by throwing it on the ground -- with two kittens inside -- at a park in Jungnang-gu, Seoul, and throwing objects at protesting cat moms. The local police forwarded the case to prosecutors, recommending he be indicted for violence, property damage and violation of the Animal Protection Act. 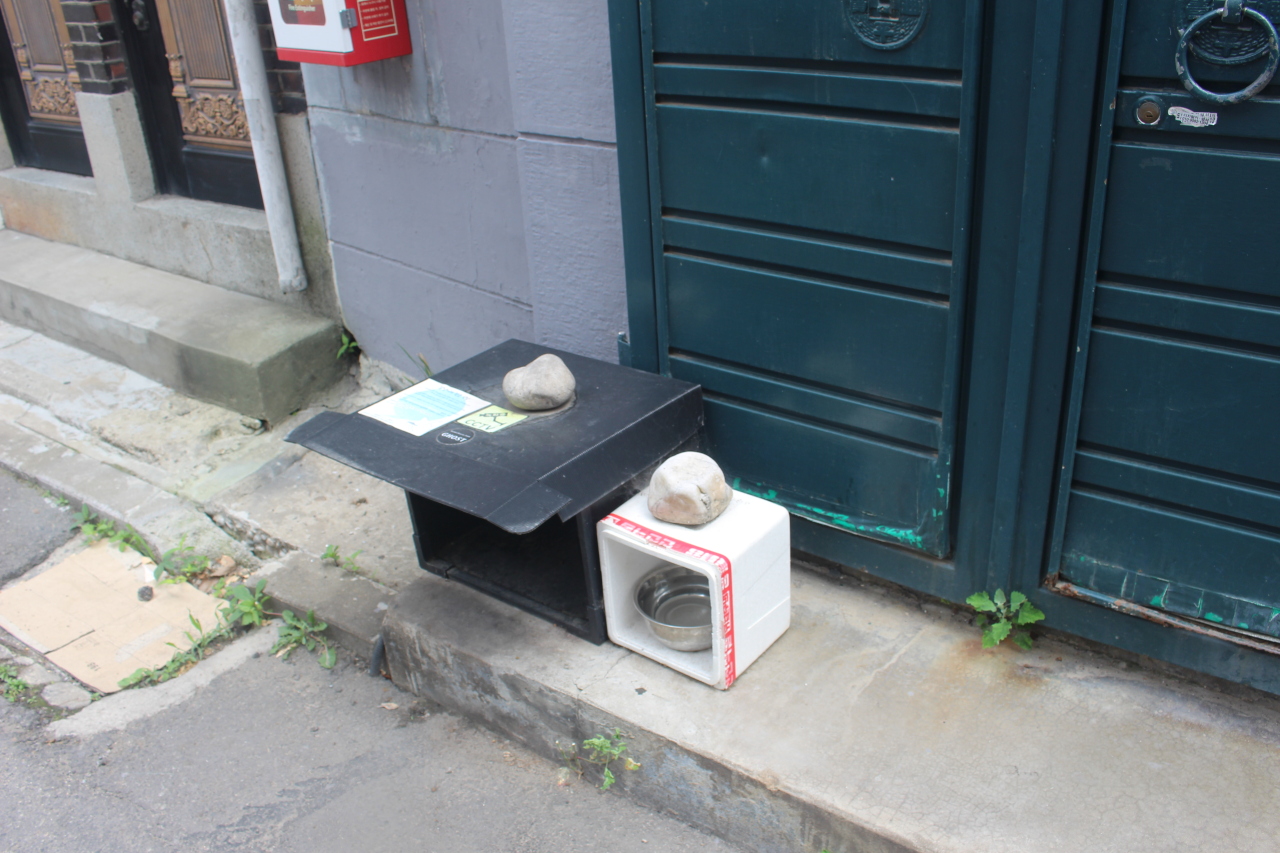 A private feeding station for stray cats set up outside a home in Nogosan-dong, Seoul. (Yoon Min-sik/The Korea Herald)
The man and the animal rights group Korea Animal Rights Advocates, which represented the cat moms in this case, made conflicting claims. The man claimed that the stray cats the station attracted damaged his car in the adjacent parking lot, while KARA said the cats were unrelated to the damage, as the feeding station was in a separate lot. 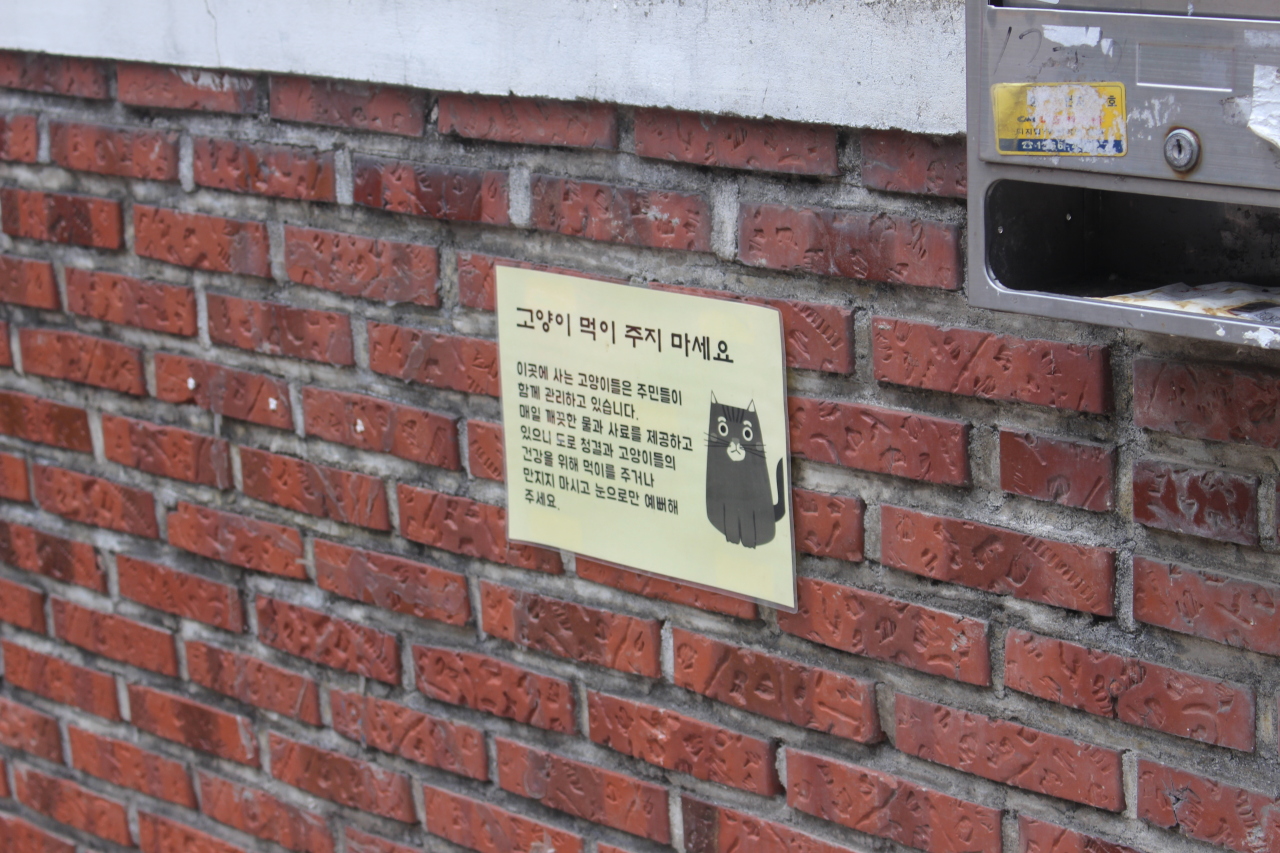 A sign in Nogosan-dong, Seoul warns people not to feed stray cats, saying the cats are taken care of by the residents in the area. (Yoon Min-sik/The Korea Herald)
Cat moms fight stigmatization

Despite cat moms‘ bad rap, there are many who express their affection for the creatures within the law and in consideration of their neighbors. The aforementioned feeding station with the sign in Nogosan-dong was placed at the gate of the supposed cat mom’s home, as were several other stations on private properties.

Another sign posted near the private feeding station warned not to feed the cats. “The cats that live here are taken care of by the residents here ... so for the sake of clean roads and the cats’ health, do not feed or touch them,” it read.

There was no mess in the area around the feeding station, as it was cleaned up by the owner of the house.

While observing the area, a three-legged cat wobbled by, showing no sign of fear at the humans around it as it sunbathed beneath the sign. The cat appeared to be relatively clean, well-fed and -- oddly enough -- at home.

“Sometimes they (cats) get annoying because they cry at night, but it’s not all that bad,” said a 73-year-old local woman, implying that not all cat mom activities are frowned upon.

Two years ago, a group of cat moms launched a private project in the development areas of Imun-dong, northern Seoul to rescue stray cats from the area. The group said it removed over 100 stray cats and sent them off for adoption. The area on Tuesday seemed mostly devoid of stray cats, possibly attesting to the group’s efforts.

Among the focal activities of the activists in Imun-dong and other cat moms is the term known as TNR, referring to the trapping, neutering and returning of stray cats. This is to ensure that the number of stray cats in certain areas do not get out of control, and counters the arguments by those who claim that cat mom activities lead to certain areas being swarmed by stray cats.

There are some cat moms who say their activities are actually beneficial for the community, as TNR and taking care of sick cats can help stop the spread of diseases.

“Personally, I think cat moms should exist to take care of the increasing number of stray cats. Feeding them is not enough -- it never is. It is necessary to do TNR, which will lead to cats fighting less at feeding stations and making less noise,” a person claiming to be a cat mom wrote in a column published on an internet magazine.

“There are, of course, misled cat moms who just feed without TNR, or fight their neighbors complaining over noise, or feed the cats at someone else’s home. Making feeding stations should be done after getting approval from your neighbors, and should be placed where it would inflict minimal damage upon them. You can also regularly switch places so stray cats won’t gather around a specific place.”