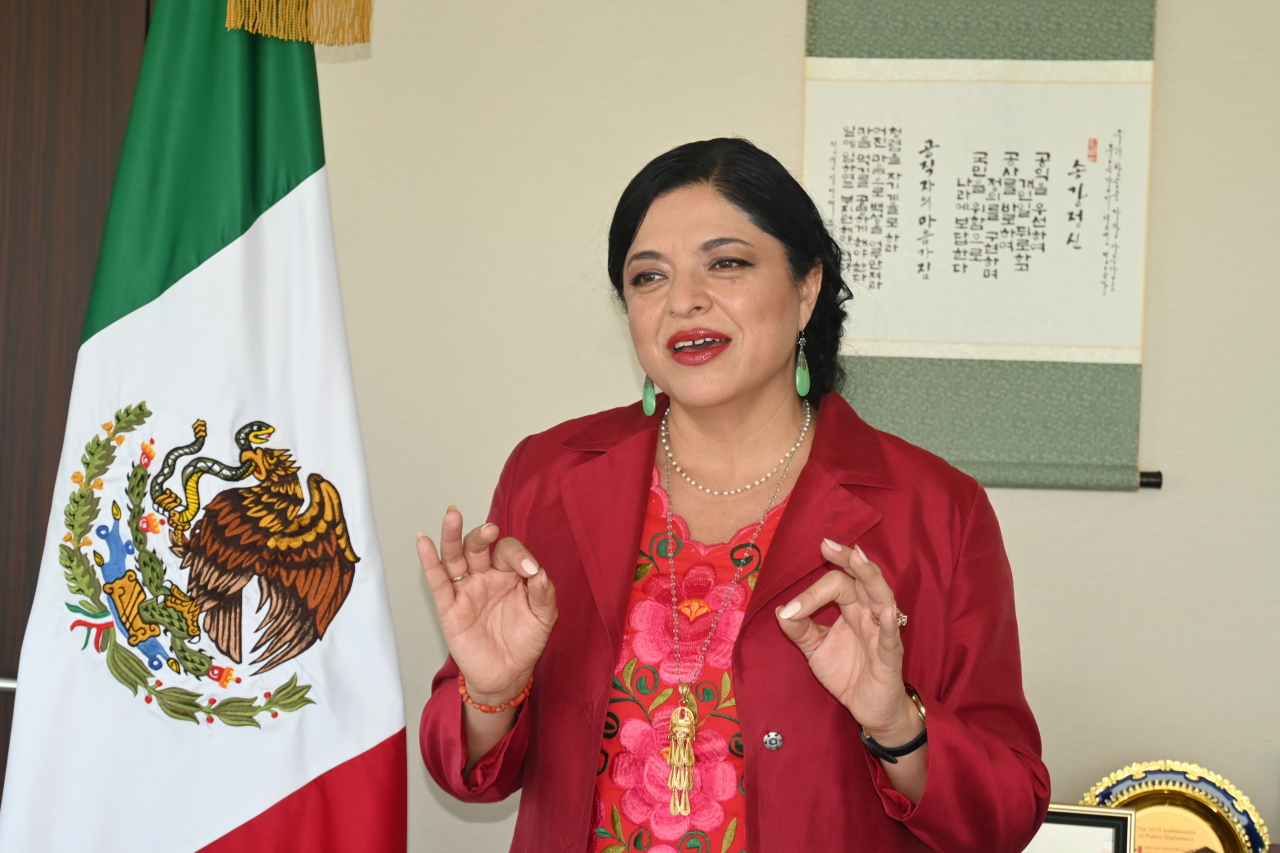 Mexican Culture Minister Alejandra Frausto Guerrero speaks on Mexico-Korea Cultural cooperation during an interview with The Korea Herald at the Embassy of Mexico in Seoul on Tuesday. (Sanjay Kumar/The Korea Herald)
Korea’s cultural and creative small and medium enterprises have been able to mobilize a whole country thanks to the public sector’s technical and financial support, and is a role model for Mexico, said Mexico’s Culture Minister Alejandra Frausto Guerrero.

“We need to learn from Korea,” Frausto Guerrero said during an interview with The Korea Herald Tuesday.

Saying that Mexico should learn about programs and methodologies to secure technological and innovative skills to foster creative industries, the minister said that Mexico is eager to expand exchanges in cultural and creative sectors.

Mexico and Korea are the heirs of cultural diversity, upon which both are building the present and future, said the minister.

“To think upon local and traditional perspectives is the only way to improve sustainable cultural development,” she said. 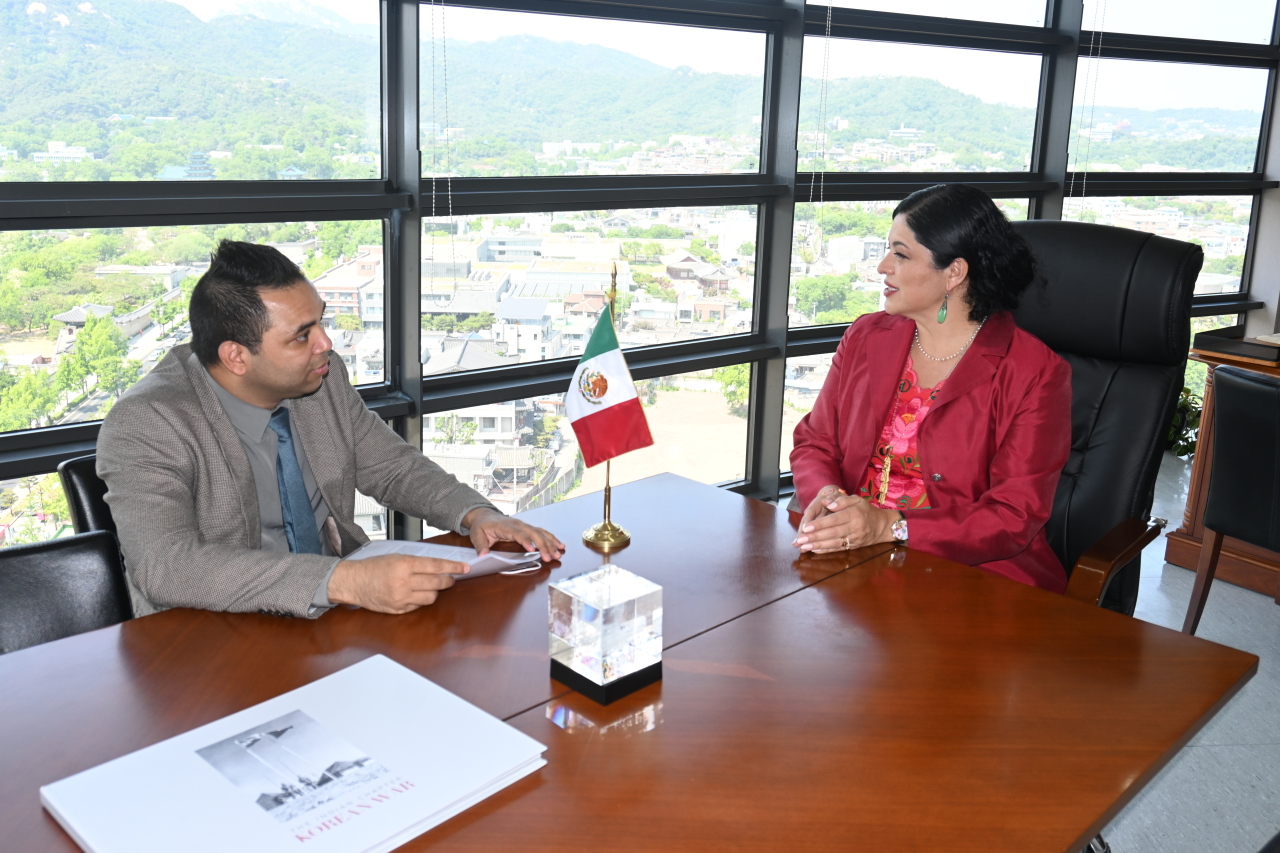 Mexican Culture Minister Alejandra Frausto Guerrero discusses Mexico-Korea Cultural cooperation and Korean creative industry during an interview with The Korea Herald at the Embassy of Mexico in Seoul on Tuesday. (Sanjay Kumar/The Korea Herald)
Discussing Mexico’s creative arts policy, she said that Mexico was fostering creativity since early childhood through “Creative Seedbeds for Community Culture.” These are spaces dedicated to artistic education for children and young people with a focus on community.

“Spaces were established in Mexican regions living under the scourge of poverty or violence,” she said. She underscored that Mexico’s youth are transforming their lives through music, theatre, poetry, performance, photography and painting.

“We are forming a generation of artists committed to the country’s reality,” she said.

She hopes to consolidate the cultural ties between Mexico and Korea, which marks 60 years of diplomatic relations in 2022.

Calling those 60 years as decades of significant cultural cooperation and exchange, she noted the richness of both countries’ ancestral cultures, traditions and customs reflected in expressions such as music, gastronomy, dance and popular art.

According to the minister, her visit is focused on South Korea’s role as guest of honor at the International Cervantino Festival. It one of the most important cultural festivals in the world, marking 50 years of existence in 2022. 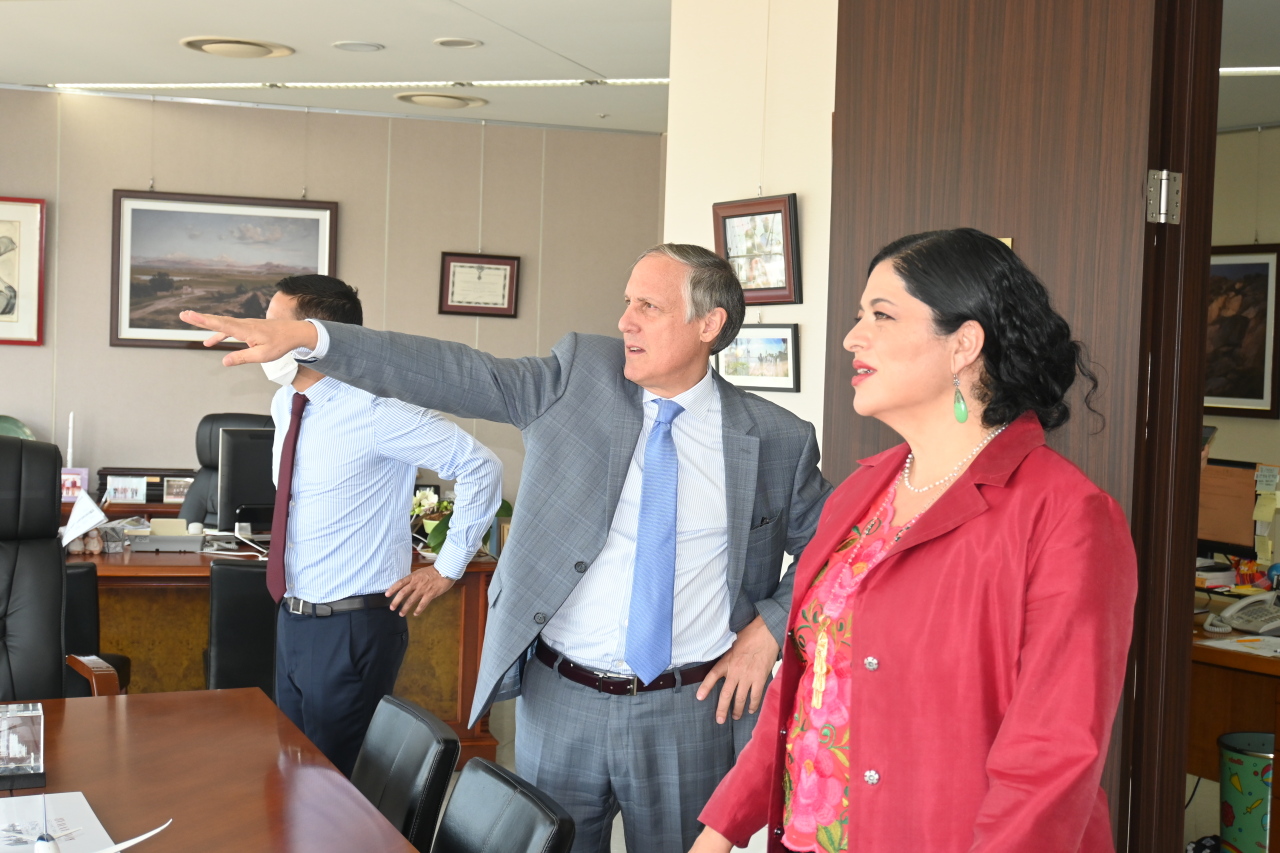 Mexican Ambassador to Korea Bruno Figueroa Fischer shows Gyeongbokgung Palace visible from the Mexican Embassy in Seoul to Mexican Culture Minister Alejandra Frausto Guerrero during an interview with The Korea Herald at the Embassy of Mexico in Seoul on Tuesday. (Sanjay Kumar/The Korea Herald)
The upcoming UNESCO World Conference on Cultural Policies and Sustainable Development (Mondiacult) will be co-hosted by Mexico and UNESCO in Mexico City. The conference will conduct analyses and discussions on new paradigms in the cultural field worldwide, and position culture as a transversal axis for sustainable development in line with the 2030 Agenda and the Sustainable Development Objectives.

She said that Mexico is at the “avant-garde” of cultural policies through important policies such as the defense of collective rights and the recovery of illegally extracted cultural heritage.

“The ‘International Decade of Indigenous Languages’ initiative was born in Mexico,” Frausto Guerrero said. The UN General Assembly declared the period between 2022 to 2032 as the International Decade to draw attention to the critical status of many Indigenous languages across the world and encourage action for their preservation, revitalization and promotion.

The Mexico-Korea cultural relationship is based on principles of respect, safeguarding and promoting of human rights, and international cooperation for development, the minister emphasized. Mexico is advocating for cultural relations based on dialogue, culture as a human right and an indispensable element for the wellbeing of our countries, she said.

Mexico and Korea’s priorities are protection, promotion, conservation and safeguarding of cultural heritage, both tangible and intangible. They prioritize the principles in the Convention for the Protection of the Cultural and Natural World Heritage of 1972, better known as the World Heritage Convention, and the Convention for the Safeguarding of Intangible Cultural Heritage of 2003. Both Korea and Mexico actively participate in the latter, Frausto Guerrero said, noting that Korea has invited Mexico to participate in the “Intangible World Heritage, registered or declared by UNESCO,” to be held in Korea from Oct. 7 – 8.

“We will propose several artistic groups expressing Mexican elements that make up part of the Intangible Cultural Heritage list, like the Mariachi (strings and trumpet music and singing) and the Pirekua (traditional p’urhepecha chants),” she said.

The culture minister revisited Mexico and Korea’s cultural agreement signed in 1966, which is still active today. She said that she considers it as the basis of the current legal framework to boost and facilitate mutual exchange of culture, tradition, and history.

She said that institutional mechanisms respond to mutually shared interests and to the changes brought by modernity.

“Mexico and Korea are aware of the use of information technologies and the importance of digital platforms for mutual approach and recognition,” Frausto Guerrero said. “This digitalization process has brought our societies closer and increased our mutual interest in learning more about each other’s contributions to music, film and literature, among many other artistic fields.”

According to Frausto Guerrero, Mexico and Korea established a cultural cooperation framework, and this visit is to give life to such agreements.

“Bridges are crossed through action,” she said, adding Mexico and South Korea will have a lot more to offer to their respective citizens from this day on.

“Indeed, because this year we are celebrating 60 years of diplomatic ties between Mexico and Korea, we considered it necessary to invite Korea as the country guest of honor at the 50th International Cervantino Festival.”