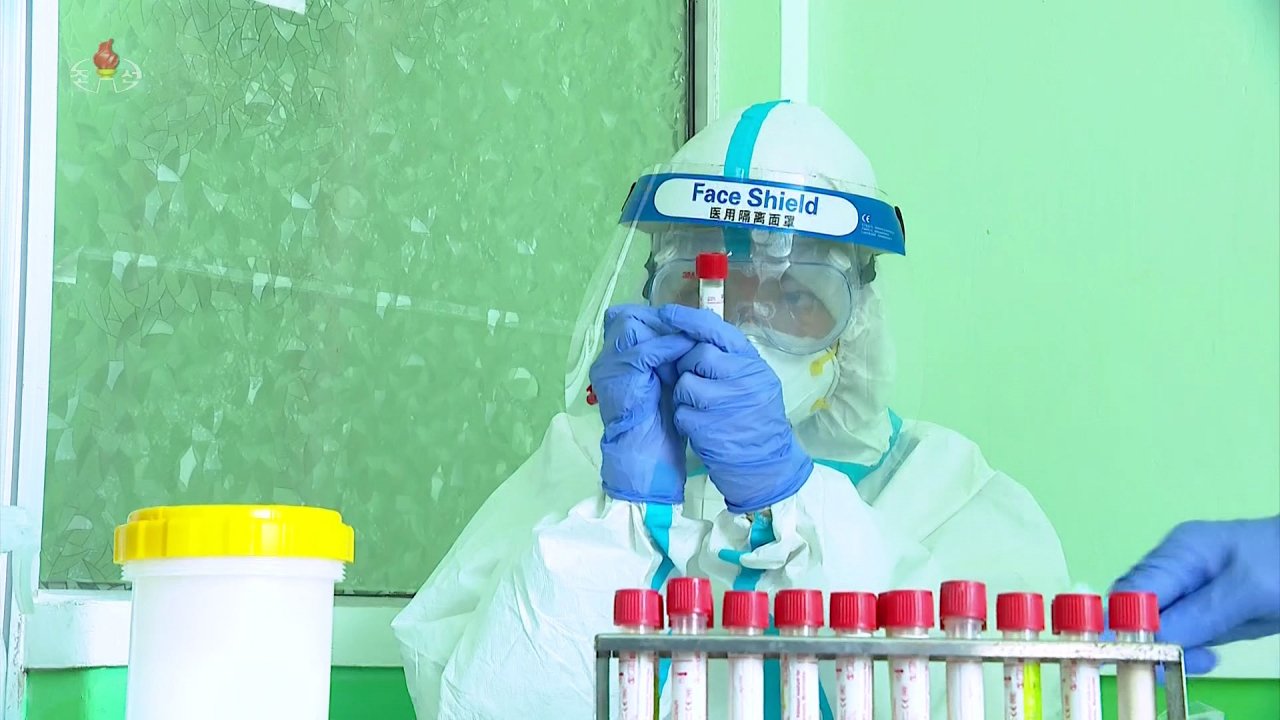 A North Korean medical worker wearing a face shield, believed to be made in China, collects test samples amid a surge in suspected coronavirus cases, in this photo captured from the North's official Korean Central Television. Last Friday, North Korea reported more than 263,370 cases of what it refers to as "fever" and two more deaths in the 24 hours through 6 p.m. the previous day. (Yonhap)

The daily number of fever cases has remained below 200,000 for the third consecutive day after reaching 219,030 cases Saturday.

The death toll remains at 68, with the fatality rate standing at 0.002 percent, the KCNA said.

The fever caseload reported since late April in the nation, with a population of 24 million, came to more than 2.94 million as of 6 p.m. Sunday, of which more than 2.54 million, have recovered and at least 400,230 are being treated, it added.

The KCNA stressed that the North has succeeded in effectively keeping the virus situation under control.

"In a few days after the maximum emergency epidemic prevention system was activated, the nation-wide morbidity and mortality rates have drastically decreased and the number of recovered persons increased, resulting in effectively curbing and controlling the spread of the pandemic disease and maintaining the clearly stable situation," it said.

Public health institutes in the North are currently conducting a reinvestigation into "fevered and recovered" patients across the country to analyze the coronavirus, including its latent period, symptoms, recurrence rate and reaction to medicine.

Pyongyang has also boosted the production capacity of its pharmaceutical industry to ensure a better supply of medicine to its people, the KCNA said.

On May 12, North Korea reported its first COVID-19 case after claiming to be coronavirus-free for over two years and declared the implementation of the "maximum emergency" virus control system.