[ The Korea Herald – Send E-mail ]
[Newsmaker] Is Son the best footballer S. Korea has ever produced?
A comparative look at three Korean soccer stars: Cha Bum-kun, Park Ji-sung and Tottenham Hotspurs’ Son
By Yoon Min-sik
Published : May 23, 2022 - 19:34
Updated : May 24, 2022 - 16:38
With Son Heung-min becoming the first Asian player ever to win the Golden Boot in Premier League history, debate about the best soccer player South Korea has ever produced seems all but obsolete.

Joining the Tottenham Hotspur in 2015 as the 13th player in the country’s history to play in one of the world’s top soccer leagues, Son had exceeded expectations by becoming the lead goal-getter of the English league on Sunday.

The 29-year-old shares the coveted trophy with Mohamed Salah of Liverpool, finishing the 2021-22 season with 23 goals. His 93 career goals are more than the number of goals scored in the EPL by all South Korean players combined, which is not a small feat considering the list includes now-retired Manchester United midfielder Park Ji-sung. 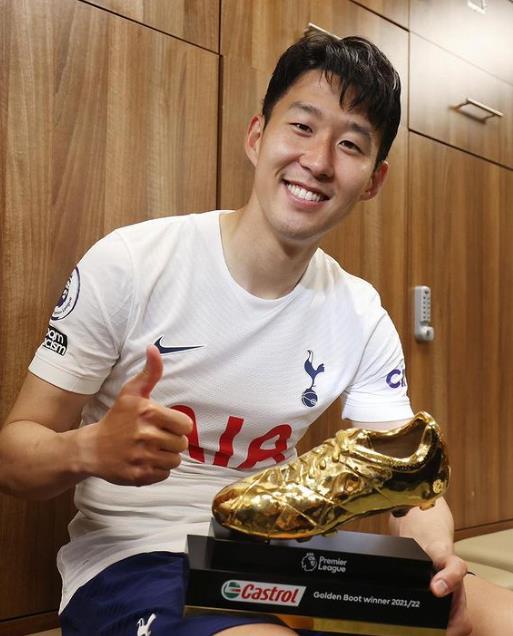 Tottenham Hotspur’s Son Heung-min poses with the English Premier League Golden boot award. (Son Heung-min’s Instagram page)
Park, the first South Korean ever to play in the EPL, was one of the most successful players in Asian history and longtime captain of the national team. While not as prolific as Son in terms of goal scoring -- notching 19 goals over eight seasons in England -- he was the ultimate complimentary player who was far more successful than Son in terms of team success.

Son falls short in the team category -- the Spurs have never won a major championship during his tenure. The team lost in the finals of the 2018-2019 UEFA Champions League and 2020-2021 Carabao Cup.

Despite the lack of team success, Son’s EPL career is widely considered the best among South Koreans as his personal accolades greatly overshadow that of Park’s. While Park was a crucial piece of Man Utd’s success, he never had the status of a star player, instead playing second fiddle to Wayne Rooney and Cristiano Ronaldo.

Ronaldo, incidentally, is one of the most hated players in South Korea for his infamous “no-show” incident back in 2019, when he refused to play in the exhibition match in Seoul between K-League all-stars and Juventus F.C. 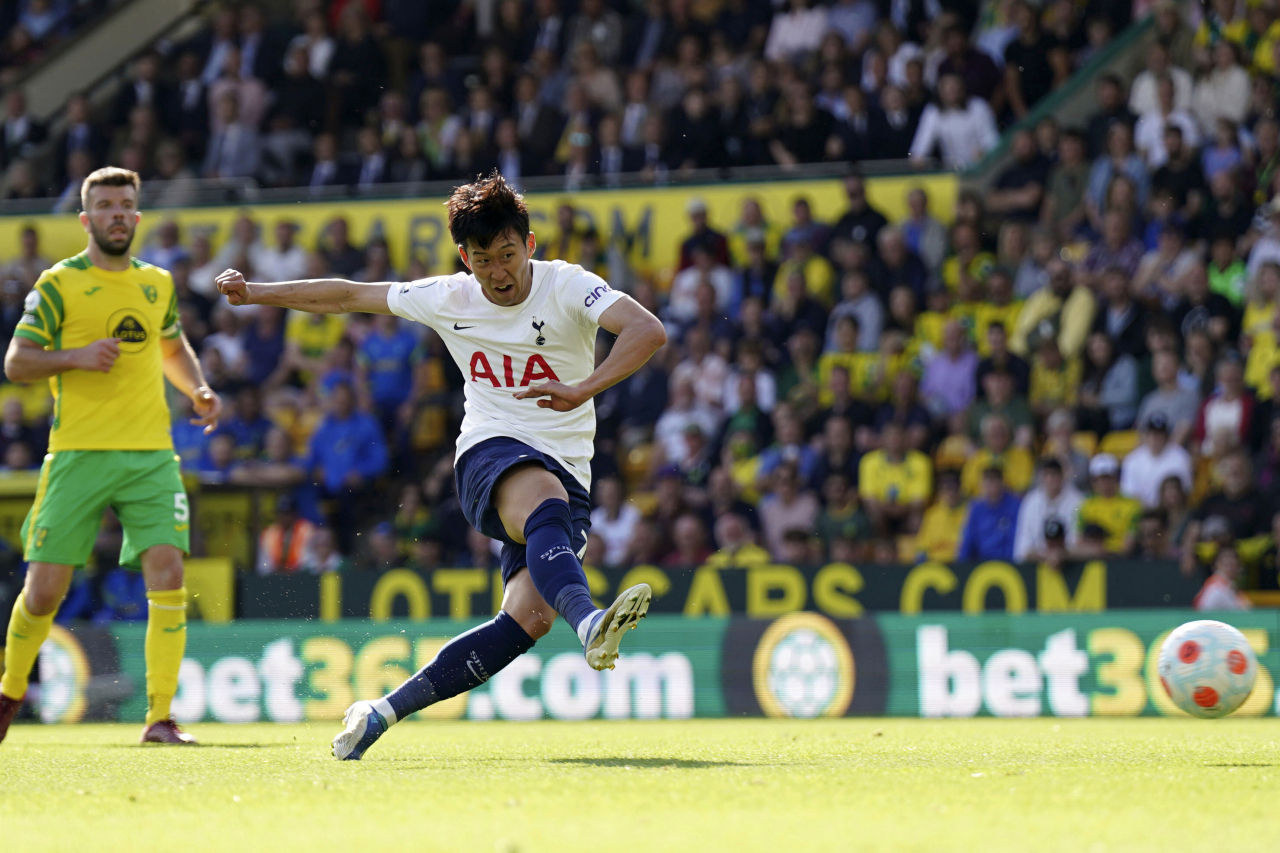 Tottenham Hotspur’s Son Heung-min shoots to score his side’s fourth goal during an English Premier League match between Norwich City and Tottenham Hotspur at Carrow Road Stadium, Norwich, England on Sunday. (AP-Yonhap)
Unlike Park, Son forms a formidable one-two punch with Harry Kane, already notching multiple honors such as multiple player of the month awards, finishing 22nd in the 2019 Ballon d’Or Award voting – the highest spot ever for an Asian -- and picking up the FIFA Puskas Award for his wonder goal in 2020.

Local pundits like sports commentator Hahn June-hea claimed in 2019 that Son had already become the best soccer player in the country’s history, a title that was once thought to belong exclusively to ‘70s legend Cha Bum-kun.

Cha, an explosive forward better known as “Cha Boom,” scored 121 goals in the European stage and was one of the top foreign players in the German Bundesliga at the time. Like Park, Cha holds an edge over Son in terms of team accolades, winning two UEFA Cups with each of his two German teams -- Eintracht Frankfurt and Bayer Leverkusen -- and winning the DFB-Pokal trophy with Frankfurt in 1980-81 season.

But as with Park, Son had already passed Cha in terms of individual records.

Son will now attempt to fill that gaping blank in his resume with another crack at the UEFA Championship, with Tottemham Hotpurs securing the 2022-23 UEFA Champions League entry with their Sunday win. It marks the club’s return to one of the most prestigious soccer events in the world after a three-year hiatus.