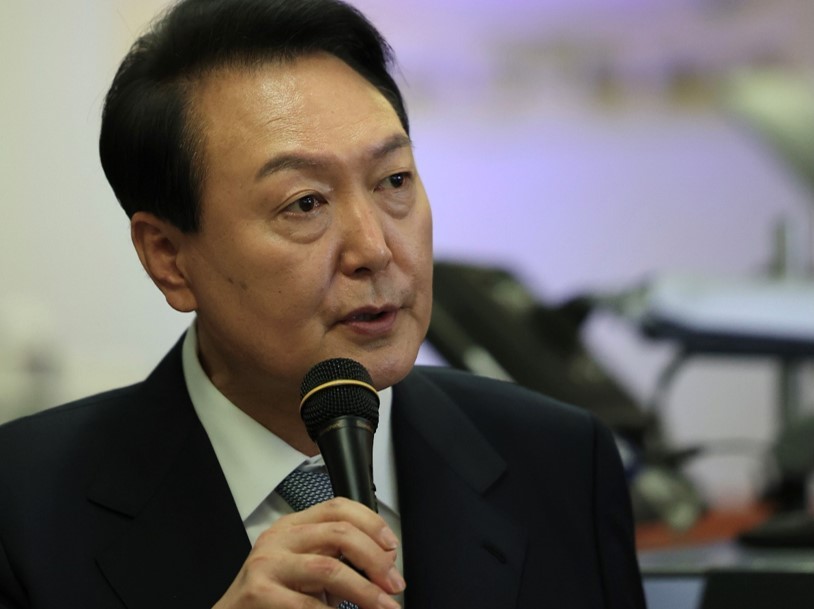 President Yoon Suk-yeol promised to build a reciprocal supply chain for semiconductors and batteries in the Indo-Pacific region and share experiences and cooperate in all fields covered by the Indo-Pacific Economic Framework at the first IPEF summit on Monday.

The US-led economic alliance was launched on Monday, with South Korea joining as an initial member. This is a follow-up to the Korea-US summit on Saturday, with the presidents of both countries pledging close cooperation through the economic alliance.

“The launch of the IPEF is a meaningful first step in demonstrating the will of solidarity and cooperation among countries in the region in a rapidly changing economic environment,” President Yoon said at the IPEF high-level videoconference at the presidential office.

He made the speech along with top-level figures from 13 participating countries at the meeting attended by US President Joe Biden in Japan. The 13 countries include Korea, the US, Australia, Brunei, India, Indonesia, Japan, Malaysia, New Zealand, Philippines, Singapore, Thailand and Vietnam. Taiwan, which China views as its own, was not invited.

“As a nation having core competencies in high-tech industries such as chips, batteries and future vehicles, we will build a mutually beneficial supply chain” with the countries in the Indo-Pacific regions, Yoon said.

He also pledged to “lead new technological innovations such as AI, data and 6G,” and “contribute to building digital infrastructure and bridging the digital divide.” Korea was the first to launch and commercialize the high-speed 5G network nationwide.

Lastly, the president promised that Korea will “actively cooperate in clean energy and decarbonization fields and build a carbon reduction infrastructure through bold investments.”

Through the joint statement, the participating members declared they would strengthen cooperation in four areas: trade; supply chains; clean energy, decarbonization and infrastructure; and tax and anti-corruption.

The member nations will seek to “ensure access” to key raw and processed materials, semiconductors, critical minerals and clean energy technology through the alliance. They plan to “accelerate the development and deployment of clean energy technologies” to decarbonize their economies and build resilience to climate impacts. They are committed to “promoting fair competition” by enacting and enforcing effective and robust taxes, as well as anti-money laundering and anti-bribery regimes.

Yoon has repeatedly expressed a strong will to participate in the US-led economic alliance.

Earlier in the morning, Yoon told local reporters, “IPEF is not a trade negotiation with a certain content like a free trade agreement, but a process of making a wide range of economic and trade-related rules in the Indo-Pacific region.”

“We must participate in the Indo-Pacific Economic Framework. If we are left out in making the rules, it will greatly damage national interests.”

China expressed blatant antipathy to the move, calling it “a strategy for destroying peace.”

In remarks on Sunday after the Korea-US summit had ended, Chinese Foreign Minister Wang Yi said the US’ Indo-Pacific strategy is “doomed to fail.”

In response, Foreign Minister Park Jin on Monday said China seemed to be looking at only “one side.”

Containing China was not important, he added, rather it was about how to find and secure a future growth engine under the newly unfolding Indo-Pacific order.

Asked whether there were any concerns after participating in the IPEF summit on Monday afternoon, Yoon said, “Even if we strengthen our alliance with the United States in security and technology, it does not mean that we think our economic cooperation with China is unimportant.”

“So I do not believe it is reasonable for China to be overly sensitive about this matter,” he told CNN in an interview.