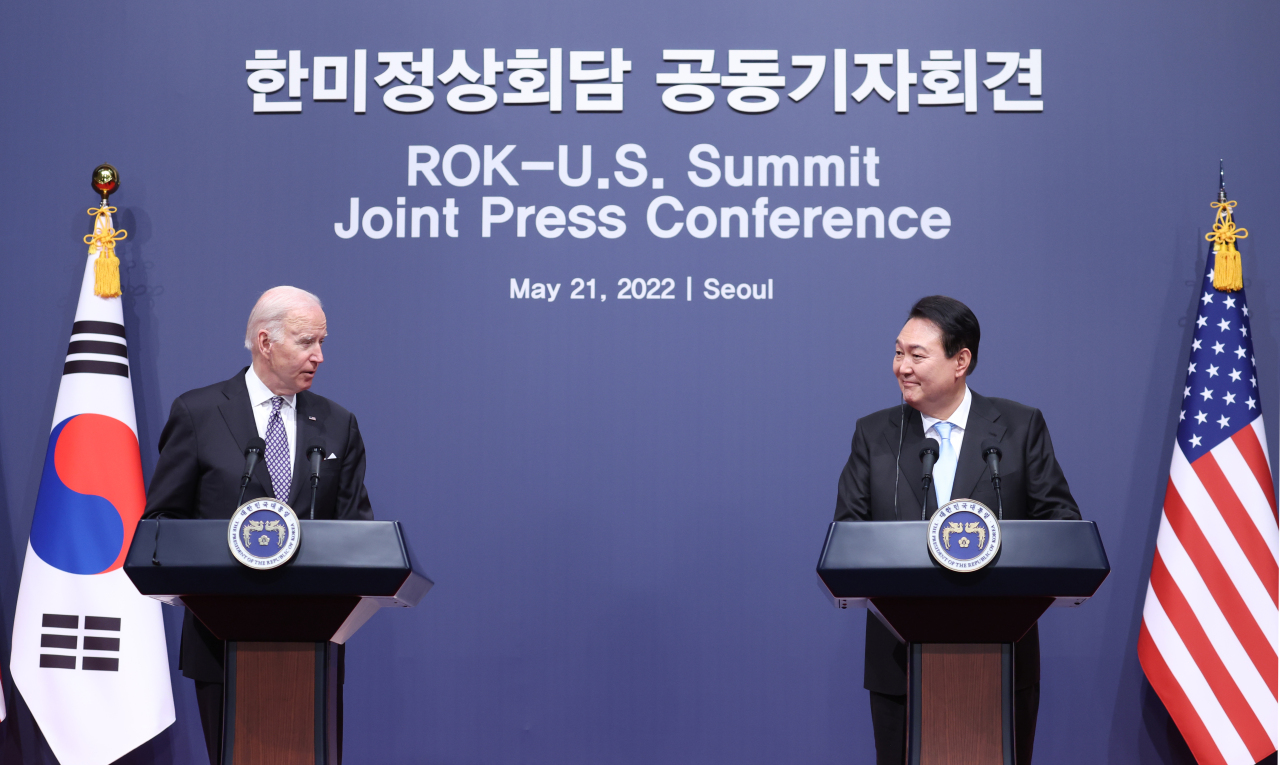 The leaders of South Korea and the US have agreed to develop the Korea-US relationship into a global comprehensive strategic alliance, reaffirmed the shared goal of complete denuclearization of North Korea, and formalized Korea’s participation in the US-led Indo-Pacific Economic Framework during their first summit in Seoul on Saturday.

At a joint press conference after the summit that lasted more than 100 minutes, President Yoon Suk-yeol said, “At the summit, the two of us shared the goal of developing the Korea-US alliance into a global comprehensive strategic alliance and closely discussed implementation plans.”

“Today, I feel that President Biden and I agree in almost every way,” he said.

“These challenges can only be overcome through solidarity among countries that share the universal values of liberal democracy and human rights,” he said. And the Korea-US alliance is "an example" of such solidarity.

The two leaders shared the view to cope with these challenges to "create a norm-based order" as a global comprehensive strategic alliance.

Yoon and Biden agreed that solid deterrence against North Korea is “more important than anything else” under the common perception that “security can never be compromised.”

They plan to “open talks to expand the scope and scale of joint exercises and drills” on and around the Korean Peninsula, taking into account the evolving threat from North Korea.

“If North Korea begins substantial denuclearization, we will work with the international community to prepare a bold plan to dramatically improve the North Korean economy and the quality of life of its people,” Yoon said.

Biden said they committed to strengthening close engagement and collectively take on challenges of regional security. He said both countries will also address the threat posed by North Korea by “further strengthening our deterrence posture and working toward a complete denuclearization” of the Korean Peninsula.

When asked by a reporter whether there would be any preconditions for Biden’s meeting with North Korea’s Kim Jong-un, the US president said: “With regard to whether I would meet with the leader of North Korea, that’ll be depending on whether he was sincere.”

On the question of preconditions for the US offering vaccines to North Korea, Biden said: “We’ve offered vaccines, not only to North Korea, but to China as well. And we’re prepared to do that. Immediately. We’ve gotten no response.”

The two sides also formalized South Korea’s participation in the Indo-Pacific Economic Framework, a US-led economic alliance, on the day.

‘“We are living in an era in which security is the economy, and the economy is security,” Yoon said.

“We decided to strengthen practical cooperation in new industries such as semiconductors and batteries, nuclear power, space development and cyber(security),” Yoon said.

Regarding the US’ Indo-Pacific Economic Framework, Yoon said the Indo-Pacific region is an important region for Korea and the US.

Korea and the US will work together to establish a norm-based order in the region, and “the first step is to participate in the IPEF,” he stated.

The two nations plan to elevate their strategic cooperation in economic and security fields to a higher level through cooperation in high-tech fields such as semiconductors, batteries, artificial intelligence and biotech.

Biden said that there is “room for a broader trade deal” to come out of the economic framework, and it is working on critical areas in the supply chain. He specified this would apply not only to semiconductors, but a range of other products.

Korea and the US decided to establish a strategic consultation channel called the Economic Security Dialogue. Through this, cooperation plans in key areas such as supply chains, advanced technology and energy will be materialized, and cooperation between the two countries will be strengthened for the advancement and visualization of IPEF performance.

The Korean presidential office kept its distance from some concerns that it might be used to contain China.

“There is not a single line in the full statement by the leaders of the two countries that excludes China from the supply chain,” said Wang Yun-jong, South Korea’s secretary of economic security, at a local press briefing after the joint press conference.

Regarding the IPEF, he said, “Rather than excluding specific countries, we are focusing on bringing supply chain stability among complementary countries,” adding, “There has not been a single discussion of excluding China from the supply chain at this summit.”