On a subway map of Seoul, some stations have names that end in the same Korean letter, romanized as “reung,” or “neung.”

Signifying the burial mounds of kings and queens, the stations are where the royal mausoleums from the Joseon Dynasty (1392-1910) lie, a reminder of Seoul’s long history as the capital city.

For busy urban dwellers, the historical tombs with a serene and peaceful atmosphere are perfect destinations for a relaxing break within the city.

Of the total 40 Joseon royal tombs scattered across Seoul and Gyeonggi Province, which were collectively registered as a UNESCO world heritage site in June 2009, eight are located in the capital city.

The following are some beautiful tombs of Joseon kings and queens that are accessible by subway. 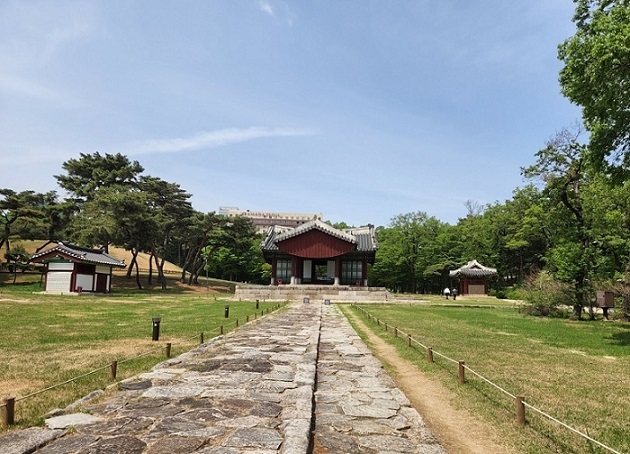 A view of Seolleung from the red-spiked entrance gate called Hongsalmun (Choi Jae-hee / The Korea Herald)
In the middle of the affluent Gangnam, southern Seoul, there’s a green park covering about 240,734 square meters, surrounded by high-rise buildings.
Outside exit 10 of Seolleung on subway line No. 2 or exit No. 3 of Seonjeongneung on line No. 9, Seolleung Park is where two kings and one queen are laid.

King Seongjong is widely credited with establishing a political system based on the Confucian ideology in the early Joseon period. A peaceful and stable era under him was upended by his son Prince Yeonsan, who turned into one of cruelest tyrants in Korean history. Thwarting the tyrant’s 11-year rule is regarded the greatest achievement of King Jungjong, the second son of King Seongjong and Prince Yeonsan’s younger brother, who ascended to the throne in 1506.

The tombs are located behind a T-shaped wooden shrine known as “Jeongjagak.” In front of the sacred building, there’s a long stone-paved walkway stretched to a red-spiked entrance gate called “Hongsalmun” that Joseon kings walked through to enter the sacred building for memorial rituals.

Hongsalmun, Jeongjagak and a stone walkway linking the red-colored gate and the holy shrine are the main structural components of the Joseon’s royal tombs.

Both Seolleung and Jeongneung are surrounded by stone slabs of animals, including sheep and tigers, as well as stone statues of civil and military officials. 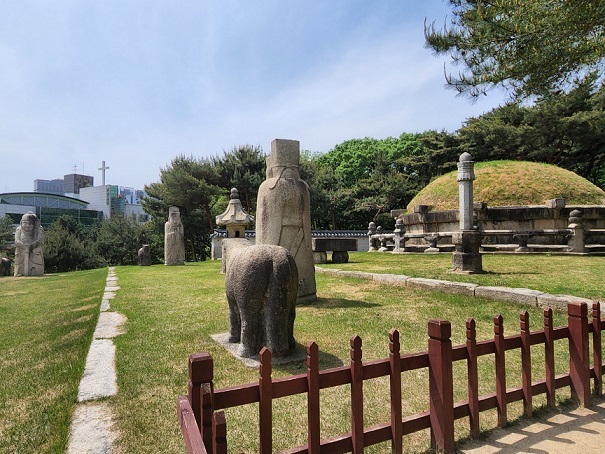 Stone sculptures of animals and the king’s servants placed around the royal tombs of King Seongjong and Queen Jeonghyeon. (Choi Jae-hee / The Korea Herald)
Known for its beautiful cherry blossoms in spring and colorful maple trees in autumn, a 3.5-kilometer walking trail encompassing the burial mounds is perfect for short city breaks.

On a recent Tuesday afternoon, a bunch of office workers dressed in suits were strolling around the park or relaxing on benches. 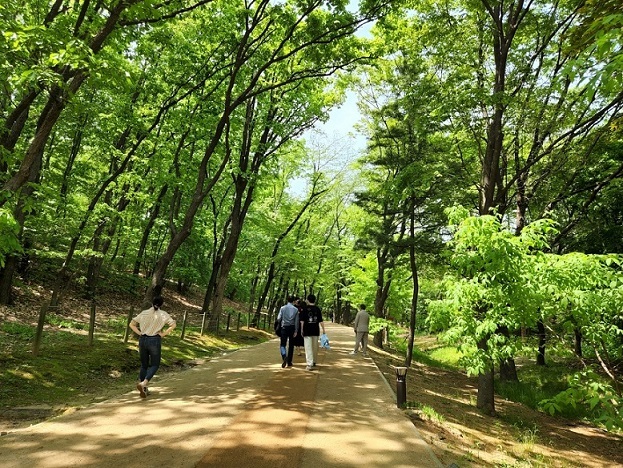 A group of office workers and residents takes a stroll around Seolleung Park. (Choi Jae-hee / The Korea Herald)
“Taking a walk around here (Seolleung Park) during lunchtime while sipping coffee is one of the happiest moments during the day. It’s a great place to enjoy nature,” said Kim Deok-hyun, a 34-year-old office worker at a marketing firm near Seolleung station.

Jeongneung and its stone statues of government officials and animals erected in front of the burial mound (Cultural Heritage Administration)
Not to be confused with King Jungjong’s tomb, Jeongneung on the Ui LRT line is where you can find the very first royal tomb of the Joseon era.

There are several Jeongneungs. The Jeong in the name derives from different Chinese letters that are pronounced the same by Koreans.

Queen Sindeok’s grave is located within a 10-minute walk from exit No. 2 of Jeongneung station.

Past a ticket office and a small bridge known as Geumcheon, what grabs the eyes of visitors is the red gate Hongsalmun leading to the sacred building Jeongjagak, which stands in front of the tomb.

The burial mound of Queen Sindeok, who died in 1396 due to health complications, has a tragic history.

To pray for the queen’s repose, King Taejo built the tomb near the current British Embassy in Jeong-dong, Jung-gu, Seoul, which was located inside a massive stone wall known as Hanyang Doseong that once encircled the capital city of the Joseon dynasty.

However, the successor King Taejong (1367-1422), the fifth son of King Taejo relocated the royal grave outside the city wall in 1409. The move was in retaliation for a power struggle he had with Queen Sindeok before he seized power.

Placed at the foot of a hill near Bukhansan, the queen’s mausoleum is surrounded by tall pine trees, making it a perfect spot to find peace and serenity in the city.

Taereung and its stone statues of military officials (Cultural Heritage Administration)
Taereung Entrance Station on subway lines Nos. 6 and 7 takes its name from the royal tomb Taereung where Queen Munjeong (1501-1565), the second wife of the 11th King Jungjong, is buried.

There’s a reason why the station’s name is Taereung Entrance, and not just Taereung -- the tomb itself is several bus stops away from the station.
Not far from the queen’s grave is Gangneung, the double tomb of her son, Joseon’s 13th King Myeongjong (1545-1567), and his consort Queen Insun (1532-1575).

The red-spiked entrance gate Hongsalmun leads to T-shaped wooden shrine Jeongjagak behind Gangneung / Gangneung, a double tomb of the 13th King Myeongjong and his consort queen Insun (Cultural Heritage Administration)
A 1.8-kilometer forest path connects the two tomb sites. It takes about 40 minutes to an hour by foot. The path, however, opens to the public at certain periods of the year -- from May 16 through June and between October and November.

Between Taereung and Gangneung stands Taereung National Training Center operated by the Korean Olympic Committee, which is the country’s biggest training center for national athletes.

The site also houses the Royal Tomb Museum of the Joseon Dynasty, where visitors can learn about Joseon-era royal tombs and state funeral procedures of the era. 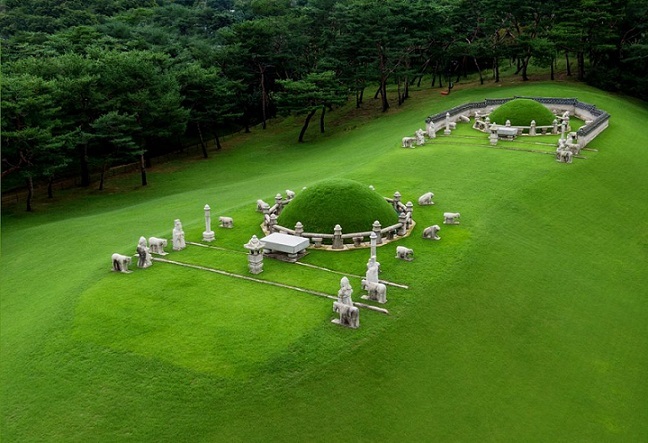 Over a narrow bridge near a ticket booth, Hongsalmun signifies the entry into the hallowed grounds.

Enclosed by a stone balustrade, King Gyeongjong’s grave is placed directly behind that of Queen Seonui unlike other royal double tombs, which are mostly arranged side-by-side.

Stone sculptures of animals placed around the grave mound symbolize the authority and dignity of the king and queen.
There is a nice walking trail of 5.15 kilometers that starts from Uireung and leads to Cheonjangsan Mountain, Korea National University of Arts and Sinimun Station.

Heolleung, which has twin mounds of Joseon’s third ruler King Taejong and Queen Wongyeong(Cultural Heritage Administration)
In the Naegok-dong area of Seocho-gu in southern Seoul, two royal burial mounds, Heolleung and Illeung, are nestled in the dense woods of Daemosan mountain, together known as Heonilleung. 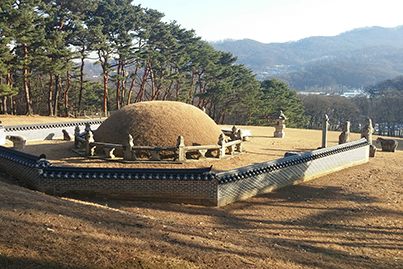 Illeung, a combined tomb of the 23rd King Sunjo and Queen Sunwon (Cultural Heritage Administration)
King Taejong is the fifth son of Joseon’s founder and is known for his ruthless executions during his rise to and stay at power. He carried out many brutal assaults on family members, including his stepbrothers and brothers-in-law, to prevent any interference with or potential threat to the throne.

Connected by a 600-meter-long trail, Heolleung and Illeung both have a long wooden stairway on their right side leading to the top of the tombs. There you can take a closer look at the graves and the surrounding stone slabs that are erected in front of each burial mound.

The historic area is also home to alder tree forests. Having been officially designated as an ecological preservation area by the Seoul Metropolitan Government in 2005, any activity that can cause harm to the ecosystem, such as capturing wild animals or plants and collecting soil or rocks, is prohibited in the area.

The nearest subway station is Cheonggyesan Station on the Shinbundang Line. It’s about 4 kilometer travel by bus, with one transfer required.

Get off at Sareung Station on the Gyeongchun Line, which is a regional rail line between Seoul and Chuncheon operated by Korail and take bus number 60 to reach the consort queen’s grave. It takes about 10 minutes.

Jeongsun was a tragic queen, whose 17-year-old husband Danjong was abdicated by his uncle, King Sejo, in 1455, only after three years on the throne. He was executed in 1457. After Danjong’s death, the consort queen built a makeshift house outside Seoul’s Dongdaemun Gate and lived there for the rest of her life. She lived to the age of 92 and died in 1521.

The tomb’s name, Sareung, is a combination of two Chinese characters “sa,” meaning to think, and “reung,” meaning tomb. It was named this was because the queen lived in sorrow and with painful memories.

Unlike other royal tombs, Sareung doesn‘t have any stone screen or balustrade. Its size is also relatively small. But a 550-meter well-trodden path through forests of oak and pine makes up for it. The forest path is only open to the public from May-June and September-October.