Kim died at 4 p.m. at his home in Wonju, Gangwon Province, after suffering from an unspecified illness for the past year, the Toji Cultural Foundation said on behalf of the bereaved family.

He passed away “peacefully, after holding each of their hands and smiling,” it added.

The foundation, which supports Korean writers and scholars, is led by Kim’s son Kim Se-hi and was named after the novel “Toji” written by Kim’s mother-in-law, the late Park Kyong-ni.

It was posthumously revealed that Kim had been on his sickbed for the past 10 years. He will be buried in Heungeop-myeon, Wonju, next to his wife who died in November 2019.

Born in 1941 as Kim Yeong-il, he began his literary career in 1969. The following year, he published “The Five Bandits,” in which he satirized the rampant corruption of society by likening the rich, lawmakers, high-ranking government officials, military generals, ministers and vice ministers to bandits. Throughout his literary career, he was jailed multiple times for his works that criticized the authoritarian regime led by military strongman Park Chung-hee.

In a commemorative message, President-elect Yoon Suk-yeol said that Kim’s “thirst for freedom and democracy” had shaken the hearts of the Korean people, while mentioning the “great footprints” the deceased left in the nation’s literary circles. 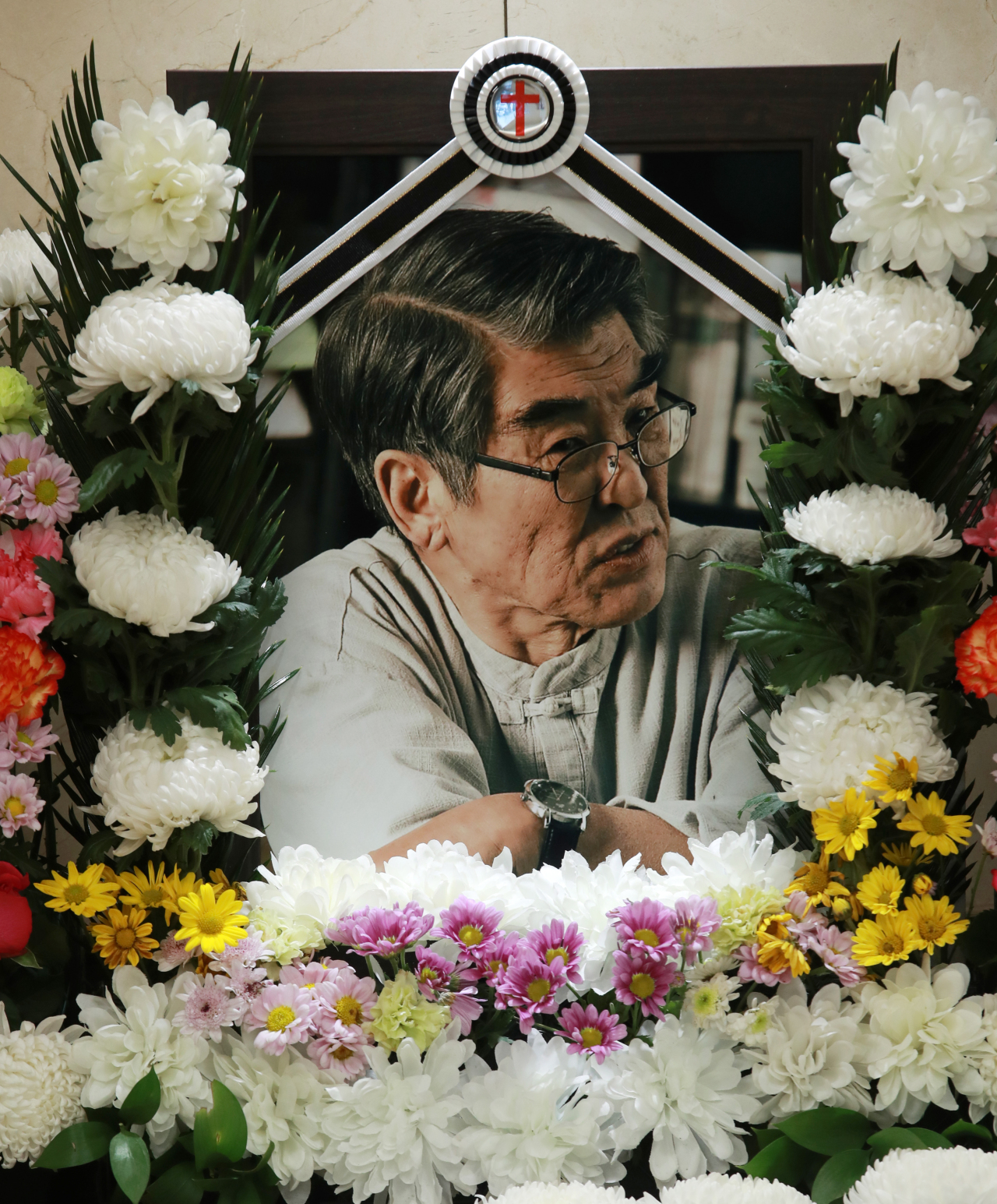 A funeral portrait of poet Kim Ji-ha at the funeral home inside the Wonju Severance Christian Hospital in Wonju, Gangwon Province is seen on Monday. (Yonhap)

“Kim’s greatness lies beyond being a dissident poet of the system, but as one who expanded the idealistic horizon and spoke directly for freedom and life, universal values of humanity,” he wrote.

Yoon sent flowers in commemoration of the deceased, as did President Moon Jae-in and former Presidents Park Geun-hye and Lee Myung-bak. Other politicians and writers from across the country also sent flowers. Lee Boo-young, former lawmaker and the chief of the Korea Foundation for Press Freedom, visited Kim’s funeral and paid respects to his college friend. “He was a person who became a political, cultural and artistic icon of our time, expressing himself without hesitation in the darkest times,” Lee said.


Kim’s first close encounter with death came nearly half a century ago when he was sentenced to death in 1974 for “instigating students to cooperate with North Korea to overthrow the government” in violation of the National Security Law.

The political trial was later revealed to have been an attempt by the dictator Park to crack down on pro-democracy movements in the country, and was accompanied by unlawful torture of many figures including Kim.

A 2013 retrial on the case by a local court delivered a not guilty verdict for Kim, citing lack of evidence to prove the allegations.

The law had not been so generous to Kim in the 1970s. His initial death sentence was reduced to 10 months thanks to international efforts to save him. But he was jailed again for arguing about his wrongful trial in a story and was only released in 1980, after Park’s assassination.

Even behind bars, Kim continued to publish works that criticized the government and praised democracy. It was also in jail that Kim published perhaps his best-known work, “With a Burning Thirst,” in 1975, which depicts the narrator’s aspiration for democracy. 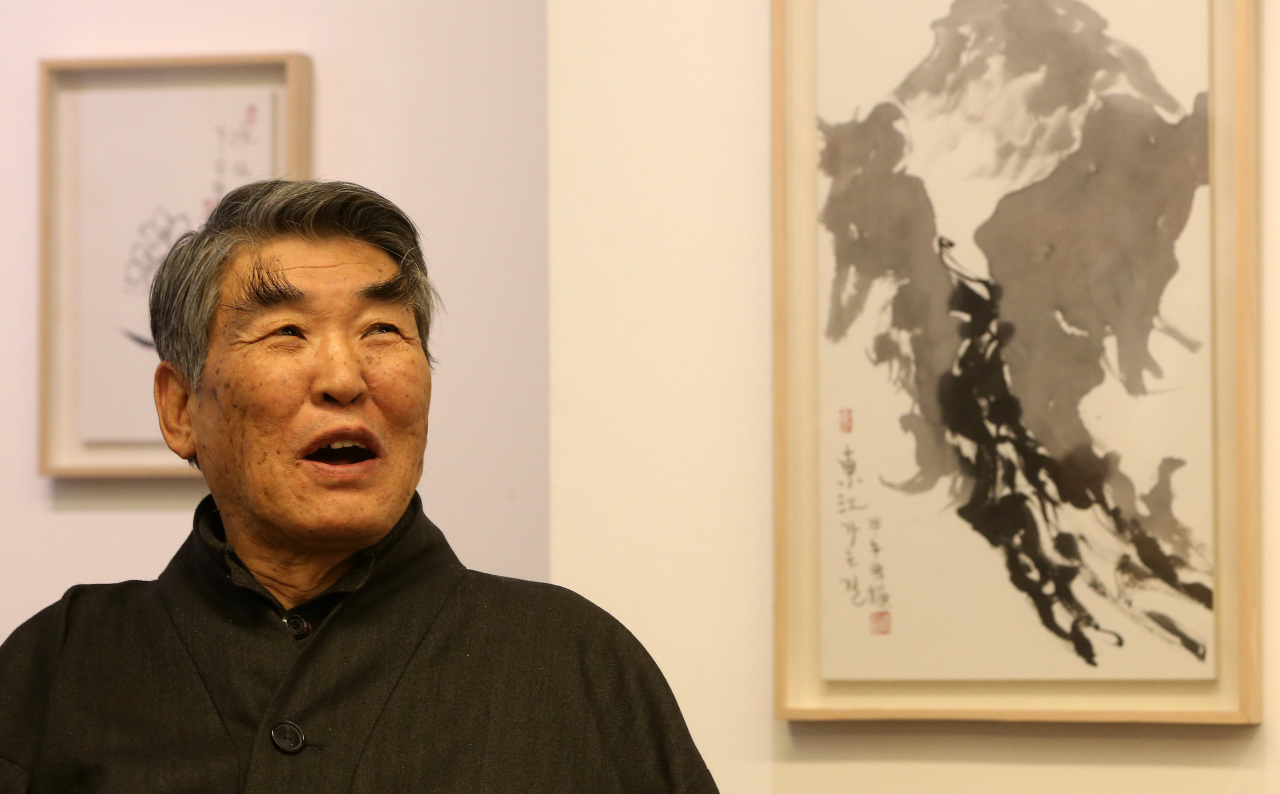 A funeral portrait of poet Kim Ji-ha at the funeral home inside the Wonju Severance Christian Hospital in Wonju, Gangwon Province is seen on Monday. (Yonhap)


Despite Kim’s outspoken calls for democracy, he remains a divisive figure.

He had been widely touted as a champion of the pro-democracy movement and liberal bloc -- led by the many who opposed the authoritarian regimes of the past -- but he was thrust into the middle of controversy for his 1991 column, in which he condemned a spate of suicide deaths by young workers and students. The suicides were in protest of the violent police crackdown that resulted in a student’s death in 1987.

Kim criticizing the protests against the government, which was led then by military general-turned-leader Roh Tae-woo, was seen by fellow activists as an act of “betrayal”. The Writers Association of Korea, the organization that called for Kim’s freedom in the 1970s, revoked Kim’s membership for life.

Kim in 2001 said the column’s idea was to respect life above politics, and to suggest to students that their protests should be “based on the principles” of life. But he did express regrets about the shock his column must have given to student activists.

In a 2011 interview, his wife told local media that Kim himself suffered a lot from the repercussions of the said column. Subject to ostracism from fellow activists, a feeling of betrayal and paranoia on his part led him to being admitted to mental institutes a dozen times, Kim’s wife said.

In yet another shock to liberals, in 2012 Kim announced his support of Park Geun-hye, the daughter of the late dictator Park Chung-hee, who stood as a conservative presidential candidate and eventually won the race.