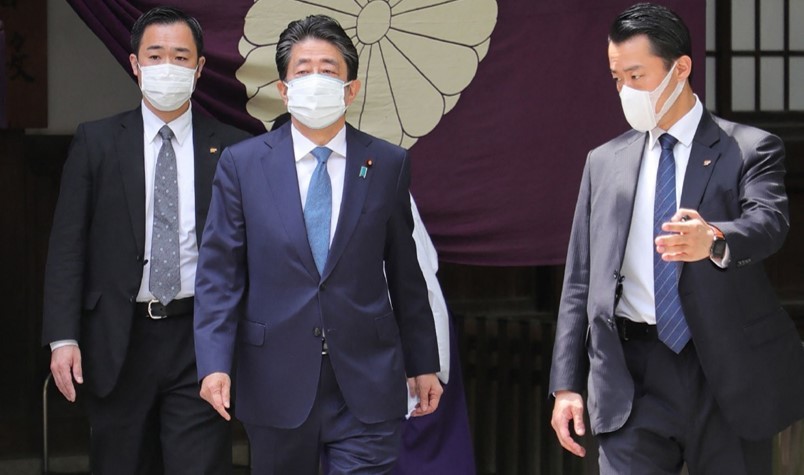 On Thursday, former Japanese Prime Minister Shinzo Abe visited Yasukuni Shrine, which includes the enshrinement of Class A war criminals. This is his sixth visit since resigning from office.

At Yasukuni Shrine, 14 Class A war criminals of the Pacific War, including Hideki Tojo, are enshrined, and politicians’ visits are perceived as glorifying Japan’s war of aggression. Tojo was convicted of war crimes at an international military tribunal in 1948.

Prime Minister Fumio Kishida sent a ritual offering to the shrine on the day, as he did last year.

These moves continue to baffle Japan’s neighbors, including Korea and China. Just a month before, the Japanese government released an evaluation of future history textbooks, which distorted the history of its past colonization.

The Korean government expressed regret over Kishida’s offering to the shrine.

“The Korean government is deeply disappointed and regretful that Japan’s responsible leaders once again sent offerings or repeated their visits to the Yasukuni Shrine, which glorified its past wars of aggression and enshrined war criminals,” the Ministry of Foreign Affairs said in a commentary by a spokesperson.

The Korean government urged Japan’s “responsible figures to face up to history” and “show humble and genuine reflection” on history with appropriate actions.

“As you well know, the Yasukuni Shrine is a place where Japan’s past wars of aggression were glorified and where war criminals were enshrined,” he told reporters on the day.

When asked if the delegation would raise the issue of distorted history in Japanese textbooks, Park said the Korean government had already delivered its position to Japan. “It is necessary (for Japan) to face the past and have a correct view of history.”

The Japanese government also sticks to its stance, calling on the new government to show leadership in Korea-Japan relations.

Chief Cabinet Secretary Hirokazu Matsuno, a spokesman for the Japanese government, said Monday that he is looking forward to the leadership of incoming President-elect Yoon Suk-Yeol.

Regarding the lawsuit filed by wartime sex slaves and forced laborers, he reaffirmed his previous position.

“Korea should come up with a solution,” he said, adding, “We cannot leave it like this.”

Professor Lee Young-chae of Keisen University in Tokyo said the delegation’s visit would not do much to change the relationship because Japan is very firm that Korea should change first.

“Regarding the visit to the shrine, the upper house election in July is much more important to Japanese politicians than the Korean delegation,” Lee said. Since Abe needs to expand his conservative support base and Kishida is also conscious of this base, it is unlikely that they will change their attitudes, he explained.

“Also, the delegation will not change that much over the history issue because Japan is very firm that Korea should admit and change,” Lee said.