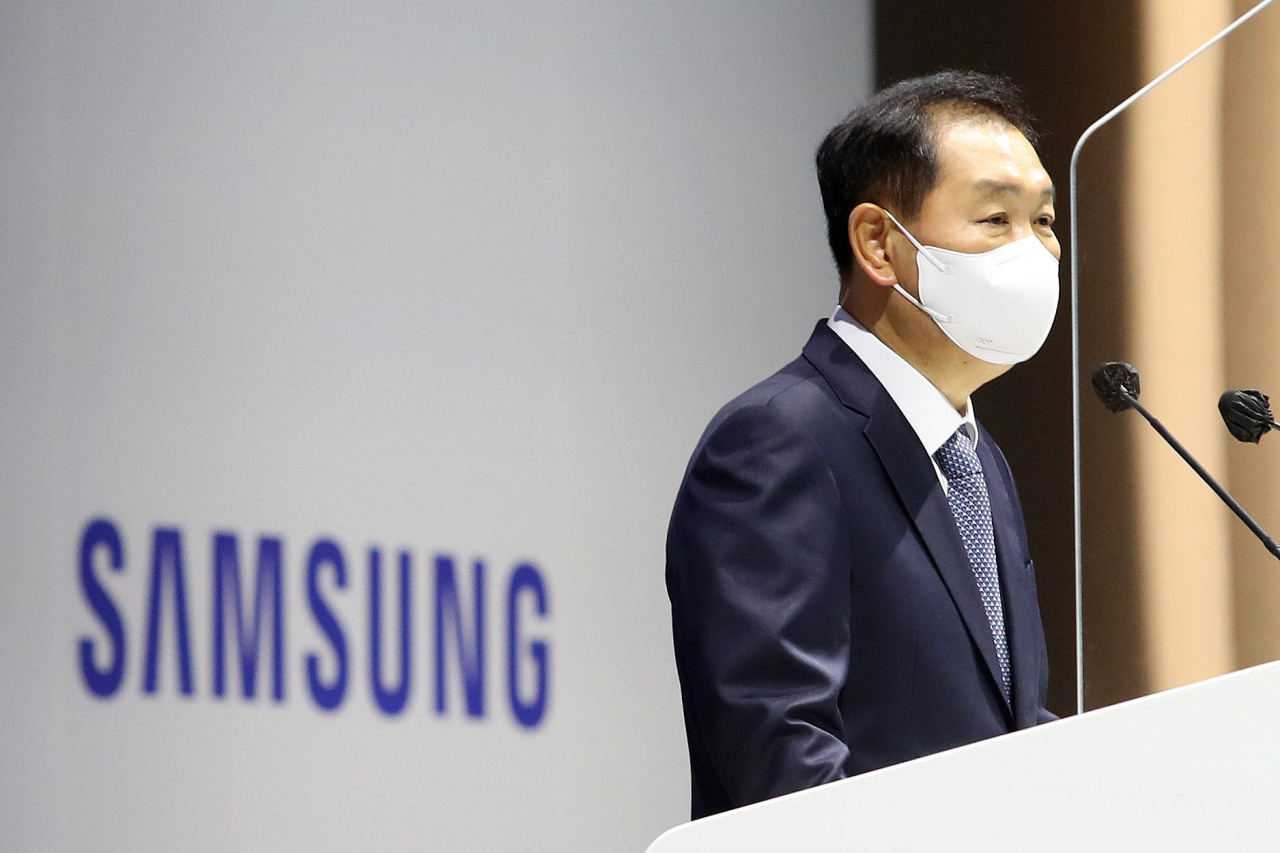 Samsung Electronics Vice Chairman and Chief Executive Officer Han Jong-hee is seen speaking at a shareholders' meeting held in Suwon, Gyeonggi Province. (Joint Press Corp)
Samsung Electronics is one of many South Korean companies who have taken on reforming the use of honorific titles in the workplace, aiming for a more horizontal culture and removing hurdles that might have stifled employees’ creativity.

The tech giant appears to have made a step toward this goal recently, namely from upper management.

Samsung co-Chief Executive Officer Han Jong-hee told staff to call him by the initials of his given name rather than honorific expressions for his job title, a common practice among Koreans who follow a seniority-based and hierarchical work culture.

“I’ll be asking you to call me ‘JH’ instead of ‘buhoejang-nim’ or ‘daepyo-nim,’” Han told staff and executives in his first meet-and-greet event with employees in the Digital eXperience division Friday.

As he doubles as vice chairman and CEO of Samsung Electronics, in conventional Korean work culture he would be addressed as either of the two job titles, which translate into “buhoejang” and “daepyo,” with the honorific suffix “nim” added to show respect.

Han’s remark, however, implies that the tech giant seeks to do away with this convention.

“Mutual respect to value everyone lays a foundation for a horizontal structure, which will again lay a basis for (our) work culture,” Han said.

“Addressing each other as ‘pro’ or ‘nim’ regardless of job position could be a start (to foster a horizontal work culture),” he said. “Pro” is short for the word “professional,” used to denote respect similar to “nim.”

This is an effort by Samsung to pursue a more productive work environment and encourage talent to work at full throttle.

Under the mantra “New Samsung” to create a “future-oriented work environment” unveiled in November 2021, starting this year Samsung will no longer allow employees to track how far their colleagues have been promoted. It will also abolish a set of requirements for an employee to get promoted to a certain level, such as a minimum term of service.

This is the company’s first major move in five years. In 2016, Samsung revamped its internal policy to add the Korean suffix “nim” to every employee’s name, abolishing titles such as “daeri (assistant manager)”, “gwajang (manager)” and “bujang (team leader).”

Han’s Friday’s town hall meeting was the first such event since he was named to take the top spot of the tech giant’s DX division overseeing the smartphones, TVs and home appliances business in December, along with Kyung Kye-hyun, a CEO in charge of Samsung’s chip business. The event took place at the Samsung Electronics headquarters in Suwon, Gyeonggi Province.