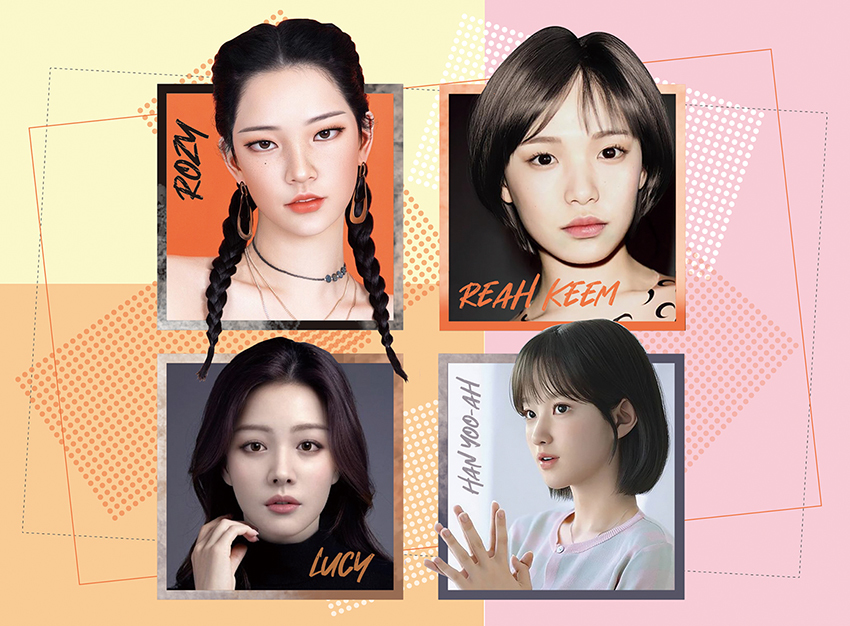 (Clockwise from the top left) Rozy, Reah Keem, Han Yoo-ah and Lucy (Designed by Park gee-young; images captured from Instagram accounts or provided by developers)
South Korea’s entertainment and commercial fields have seen a rise of beautiful, multi-talented young women capable of doing almost everything -- from acting to fashion design. Despite being in their early 20s, they display impeccable skills and give performances that exceed human expectations. They have no stress, no sleep and no scandals. Though they are labeled as perfect human beings, they have their own limits. They are not actual people, but virtual humans produced by cutting-edge computer graphics and who exist only in the virtual world.

Meet Rozy, a 22-year-old woman standing at 171 centimeters. She has become one of the most popular virtual humans so far here. With over 125,000 followers on Instagram, she has received a verified badge from the social media platform. The badge means Instagram has confirmed that an account is an authentic one directly run by the public figure, celebrity or brand. She also shook up the marketing landscape here when she made a splash in a video commercial for local life insurance company ShinhanLife last year.

The never-aging Rozy’s market value has skyrocketed since then, modeling for companies in a wide range industries including automobile, cosmetics and fashion. She is estimated to have earned over 1.5 billion won ($1.2 million) last year. She also made her singing debut by releasing her first single “Who Am I” last month.

In the virtual world, Rozy has peers of her own kind, although she has no personal interaction with them.

Earlier this week, Netmarble’s virtual human Rina inked a deal with local entertainment agency Sublime, which manages actor Song Kang-ho and singer Rain. According to Netmarble, Rina will later appear in the company’s games and various pieces of content related to the metaverse.

Han Yoo-ah, a virtual character first developed by Smilegate for its virtual reality game Focus on You, signed a contract with YG Entertainment’s model agency company YG KPlus last month. Han is expected to make her debut as a singer with CJ ENM in the first half of this year.

LG group has created two virtual characters -- Reah Keem and Tilda. Keem first met the public at the Consumer Electronics Show via a video clip in January last year. She is scheduled to release her debut album later this year. Tilda, a virtual AI fashion designer, showcased her 200 outfits at New York Fashion Week last month after she had studied some 3,000 images and patterns to draw them up.

While some virtual humans began pursuing careers in music after they made their names known on social media platforms, other computer-created humans began as singers from the moment they were born.

In March 2021, local artificial intelligence developer Pulse9 created the 11-member virtual K-pop girl group Eternity using deep real AI technology. The group’s debut music video on their official YouTube channel has garnered over 1.1 million views since it was uploaded in March last year. According to Pulse9, Eternity’s member Jaein will be a supporting actress in a four-part web comedy series which will be released in April.

Lotte Home Shopping’s Lucy made her debut as a show host for the company’s TV program in December. She only made a brief appearance as she introduced what will be the next product on sale. The company said it will make technological advances so that Lucy can play the role of a full-time show host this year.

The tricky part for virtual humans in Korea is that they are all young women.

Lee Eun-soo, assistant professor at KAIST’s School of Humanities and Social Sciences, said it is because of the commercial purposes of the companies looking to make the most of the made-up humans.

“It’s a reflection of the real world,” said Lee, referring to the phenomenon of women dominating influencer marketing across social media platforms.

The dominance of virtual females for commercial purposes has to do with customers’ familiarity with female human models, who customers feel are easy to build intimacy with, according to Lee Kyung-jae, professor at Chung-Ang University’s Department of Artificial Intelligence.

“I think it’s because setting up virtual humans as young women makes it convenient for (companies) to utilize them to promote products whose main consumers are women,” he said. “They are also easier to build intimacy and likability with.”

Apart from the gender issue, the rise of virtual humans in general are in line with the desire to understand ourselves better.

“We humans have always had the innate desire to explore and apprehend our very own being. That is, what it means to be human. By creating beings that mirror human features -- clones in genetics, humanoid robots in robotics -- we, in turn, can develop an understanding of ourselves,” said Lee.

“Virtual humans are a reflection of a similar desire. They are essentially the software version of clones and robots. With the pandemic further pushing people to stay connected online, the trend (of virtual humans) has only accelerated.”

Adding that more companies will try to introduce their own versions of a virtual human due to the economic advantages, he pointed out that virtual humans are stress-free and greatly reduce companies’ operating costs, as they are simply data.

Some believe the virtual human frenzy has come up to simply draw in more attention.

Kim Jae-yin, professor at the Center for Cross-Cultural Studies at Kyung Hee University, said the term “virtual humans” is just an exaggerated expression that has been riding the marketing waves of AI, the metaverse and non-fungible tokens.

“It has just changed to a commercial, marketing term. Improved computer graphics technology was combined with the desire to reduce marketing risks such as deviation of models.”

“The freshness comes from the realization that it was not an actual human. The heart of a commercial is to draw in viewers’ eyes. So the shock was based on the fact that it was not a real person, but a virtual human,” said Lee.