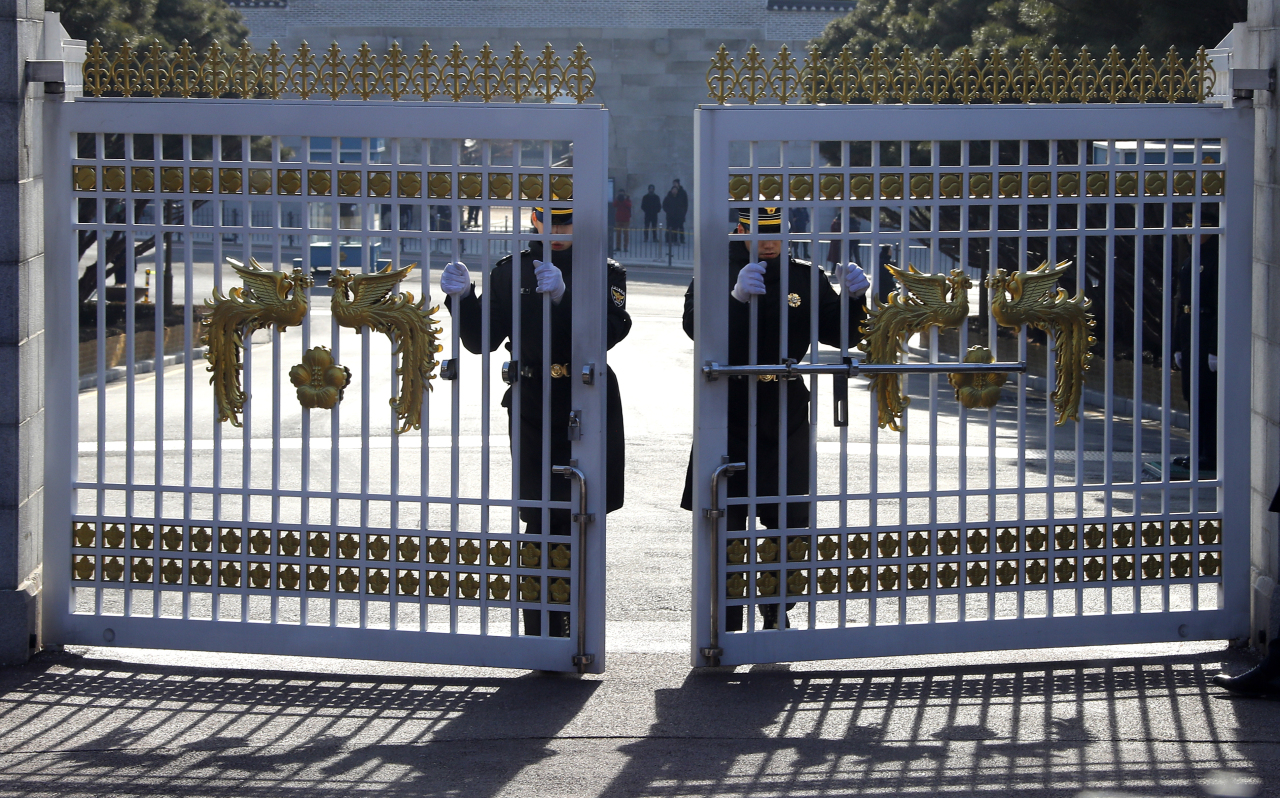 A gate to Cheong Wa Dae in Jongno-gu, central Seoul (Yonhap)
The site of Cheong Wa Dae dates back to Goryeo (918-1392) when the kingdom had royal palace halls at the site.

During the Joseon era (1392-1910), the site was considered a sacred place. Located right outside Sihwamun, Gyeongbokgung’s north gate, it was a place where royal retainers pledged their loyalty to the king. According to annals from the reign of King Sukjong, the place was considered so sacred that no king dared to occupy the place despite its beautiful scenery.

The land was later named Gyeongmudae, partially used as a place to train martial skills when Regent Heungseon Daewongun ordered the rebuilding of Gyeongbokgung Palace in the mid-19th century. The palace had been destroyed in a fire in the late 16th century. After the Korean Peninsula was annexed by Japan (1910-1945), the Japanese Governor-General’s official residence was built at the site where Cheong Wa Dae is now located.

Cheong Wa Dae has been the administrative offices of the president, secretariat and other staff as well the official residence of the president and the first lady. It was officially named Cheong Wa Dae in 1960 following the inauguration of President Yun Bo-sun who served as the second president of South Korea. The main building was completed in 1991 during the administration of President Roh Tae-woo, the sixth president of the country.

Cheong Wa Dae consists of several buildings and a garden, including the main office building whose architectural style is based on Korean palaces and has an iconic roof covered by 150,000 blue tiles. These tiles are what gave rise to the name “Blue House.” Also part of Cheong Wa Dae are a state guest house that hosts official events or large meetings and an official residence for the first family and Sangchungjae, which was built with wood from Korean red pines and is used for receiving foreign guests and unofficial meetings.

Nokjiwon is a 3,300-square-meter garden populated by some 120 different plant species, including those planted by the former presidents. The 160-year-old umbrella pine that stands 17 meters is the best known symbol of the garden.