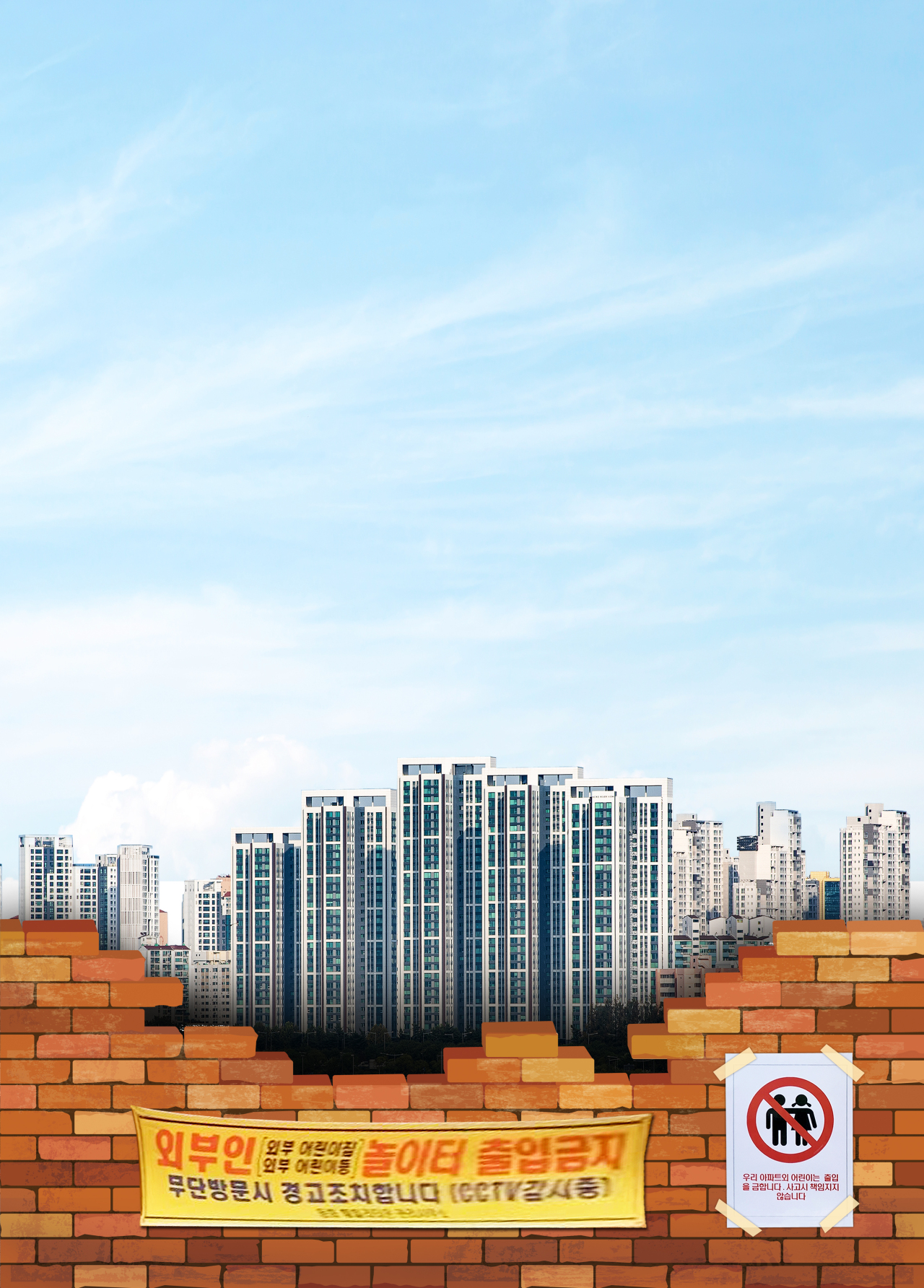 A vote took place at one of the most expensive apartment complexes in central Seoul last May.

“Due to the indiscriminate actions of passersby within the complex, damage to residents such as trash throwing, unauthorized use of facilities, theft accidents and pet excretion continues to take place,” read the notice for the vote, asking residents to express their opinion through the poll on the installation of fences and a gate to limit the access of strangers.

“It was unpleasant to see people from outside drinking and making noise while sitting on benches in the complex where children are playing,” said a resident who voted for the fence installation. He declined to be named.

As is the norm with new apartment complexes in Korea, Gyeonghuigung Xi is not just a flock of tall residential towers. It has stylized shared gardens between buildings, walking and biking trails, water gardens, fountains, a cafe, library, gym and other community facilities.

His family pays about 300,000 won ($242) for their apartment maintenance fees per month. It includes costs for tending those community amenities and the use of outdoor elevators, which are often harnessed by nonresidents to take a shortcut to a nearby 50-year-old traditional market.

If not a physical fence, a psychological wall exists between some residents of new apartment complexes and their neighbors.

Five children who were playing at a playground of an apartment complex in Yeongjongdo, Incheon, were held at the apartment’s management office in October last year for playing in “someone else’s playground.”

The then leader of the residents’ council reported the children to police, alleging they damaged playground facilities. It was proven to be false based on footage from the surveillance camera installed there.

According to the children’s testimony, the man singled out children who didn‘t live in the apartment complex and called them “thieves” for coming to “someone else’s playground.”

The parents of the children sued him for intimidation and confinement. He lost his position through votes of the apartment residents.

The two cases show a growing trend of apartment complexes turning into gated communities in a country nicknamed “the republic of apartments.”

The desire to secure a safe living space for residents of the complex by blocking the noise and potential danger stemming from the outside world is particularly strong among those living in newly-built apartments that feature posh amenities and well-designed landscape.

“People living in the same compound have been developing a unique type of community fellowship in big cities, as they share the same interest -- including home prices,” said Jung Heon-mok, an anthropology professor at the Academy of Korean Studies.

To be fair, gated communities are not a new thing. In many countries with a sharp gap between the rich and poor, wealthy residents congregate in gated communities, keeping themselves apart from the rest.

Yet, in Korea, competitions between construction companies to build prestigious and private apartments equipped with state of the art technology security systems, gardens and community centers have initiated the trend, experts said.

“A gated community may be needed to ensure security and safety in suburban areas, but the creation of a closed environment and complex in city areas has a negative impact on the existing urban ecosystem,” said Kim Do-nyun, an architecture professor at Sungkyunkwan University.

Blocking pavements and alleyways to a bus station that have been used by existing residents in the area for a long time before an apartment became nestled there is an example of a gated community that cuts off the city street network and causes an imbalance in living infrastructure.

Due to the gap between the existing residential area and an apartment complex, the notion of “neighborhood” disappears and the sense of community gets weakened, prompting social conflict, he added.

“What makes a good city is when there are many good roads. We have removed many roads in exchange for good houses,” Kim said.

While private construction companies keep building up apartment complexes separating people in accordance with their social strata, public projects have been experimenting with ways to make them live together.

In 2003, the government announced a plan to enhance social integration in housing among income classes, in what is commonly called the social mix policy. It also aims to prevent the emergence and expansion of slums due to stratification in large cities.

Until then, when an apartment complex was built through a redevelopment project, a building for low-income or homeless people who rely on state funds to rent small-sized apartments was set up in a corner of the complex. Living in the same complex, a parking lot and playground were installed separately by those who were afford to buy an apartment with their own funds. The buildings were painted in different colors to visually distinguish who belongs where, causing discrimination and social exclusion.

The Seoul City government implemented the social mix policy on public housing projects first, and then applied to all urban renewal projects such as redevelopment and reconstruction since 2010.

The work is still in process. The number of public rental houses in Seoul nearly tripled from 10,223 in 2015 to 29,872 in 2020, according to data from the Ministry of Land, Infrastructure and Transport.

In the latest move, Seoul Mayor Oh Se-hoon mapped out a plan in January to prevent separation of apartment owners and public rental households by adopting a lottery system. Regardless of their types of house ownership, a tenant will get to pick the apartment number, floor and building of an apartment complex randomly. Lot-solid apartment owners used to have priority claim.

Social mixing policies are playing a role of laying groundwork for social consolidation as the housing problem is directly related to the social issues, said Kim Young-ook, architecture professor at Sejong University.

Making it impossible to judge income class based on physical appearance of a house alone is the ideal method, discovered by many developed countries after going through trial and error.

“The fundamental problem our society has is that people only see residential space as a product and investment vehicle,” he said.

“Housing is a space where people can learn about and internalize their social community, ethics and social support based on what kind of living environment they grow up in.”