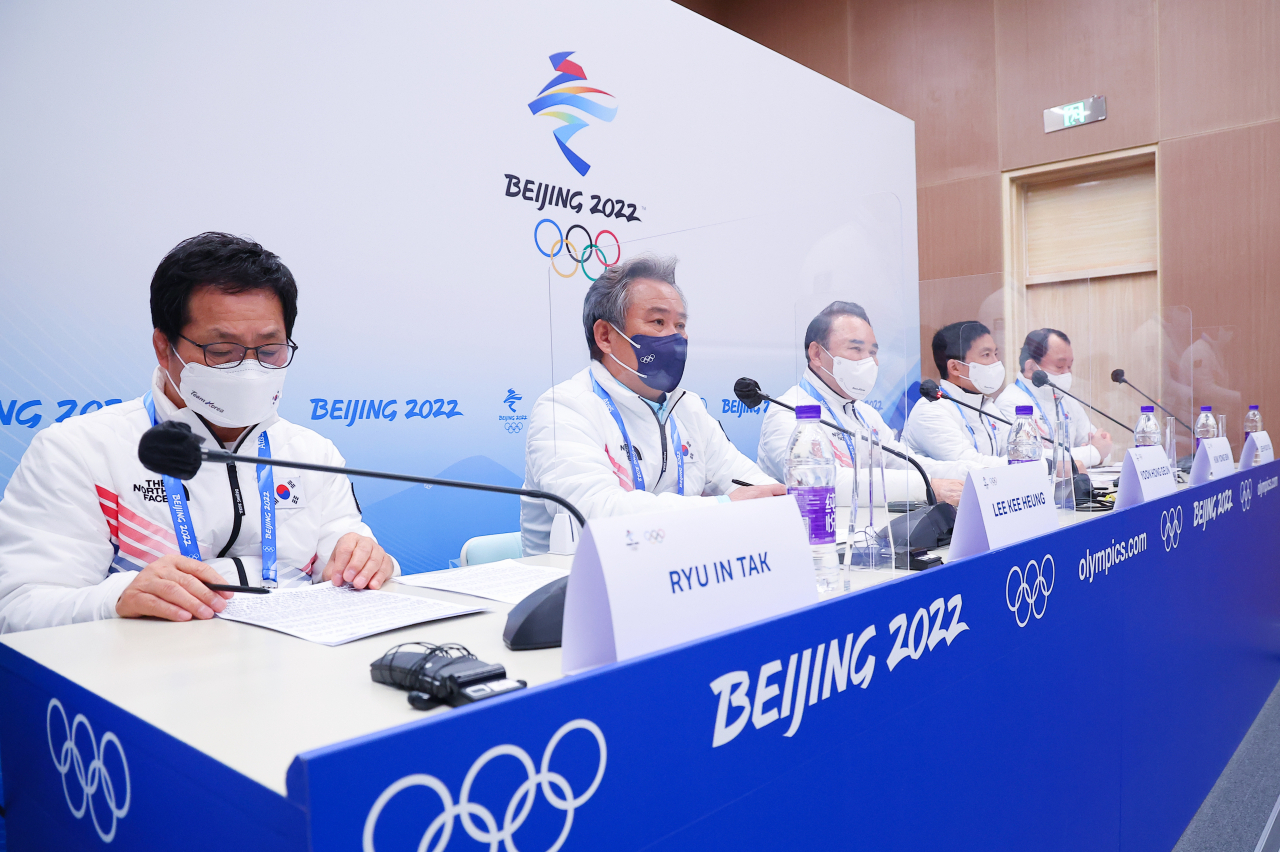 Korean Sport & Olympic Committee President Lee Kee-heung (2nd from L) speaks at a press conference at the Main Media Centre for the Beijing Winter Olympics in Beijing on Sunday. (Yonhap)

Lee Kee-heung, president of the Korean Sport & Olympic Committee (KSOC), held a press conference in the Chinese capital to discuss South Korea's performance at the 2022 Winter Games. With the competition drawing to a conclusion Sunday, South Korea finished with two gold, five silver and two bronze medals. All of those medals came from short track speed skating and speed skating.

The KSOC's target for Beijing had been to win one or two gold medals. Lee said South Korean athletes overcame many challenges, such as lack of training caused by the global COVID-19 pandemic and controversial officiating, to meet that objective.

"Our athletes delivered memorable performances to give fans back home something to cheer about," Lee said. "By winning nine medals from short track and speed skating, we were able to confirm our international competitiveness in those sports once again."

South Korea was shut out of medals on snow and track, after winning two medals in sliding events and another in snowboard at the previous Winter Games in 2018 in PyeongChang. Lee said there is an urgent need to develop new Olympic-caliber athletes in non-skating events, with South Korea scheduled to host the 2024 Winter Youth Olympics.

"With snow events, there are only limited opportunities for our athletes to train at home. They need to spend more time overseas," Lee said, adding that Yanqing National Sliding Centre in northwestern Beijing, which held Olympic sliding races, could be a useful training venue for South Koreans.

"Our national federations (for sliding and snow sports) will find new ways to train and select Olympic athletes," Lee added. "We went through similar steps with some of our summer sports after the Tokyo Olympics last year."

Lee reiterated his earlier push to co-host the 2024 Winter Youth Olympics with North Korea. He said the KSOC, through the South Korean government, has sent an official proposal to Pyongyang to hold the quadrennial event together.

"This will be as big as the regular Winter Olympics, with more than 80 countries sending some 3,000 athletes," Lee said. "We'll try to use that occasion to bring about changes to the Korean Peninsula through sports. Hopefully, it will be a major celebration of peace with many young athletes from around the world on hand." (Yonhap)