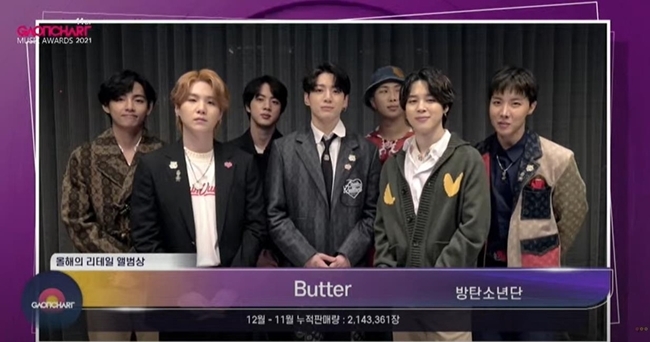 At the annual music awards ceremony held at Jamsil Arena in eastern Seoul on Thursday, the seven-piece act won the most awards this year among all singers, including three trophies in the artist of the year -- digital music category and one in artist of the year -- physical album category.

The awards are given to 12 digital songs that topped the chart each month and four physical albums that sold the most on a quarterly basis between Dec. 1, 2020, and Nov. 30 last year.

Based on chart statistics, the act’s “Butter” and “Permission to Dance” were chosen as the best songs for May and July last year, while “My Universe,” the band’s collaboration single with British rock band Coldplay, was selected as the best song for September. “Butter” was also picked as the third quarter’s best physical album.

The boy band nabbed trophies in four other categories, including music steady seller of this year, social hot star of this year, MuBeat global choice and retail album of this year for the song “Dynamite.” BTS did not attend the ceremony as the members are on a long-term break, but delivered a message via video.

“Thank you from the bottom of our hearts. We’ve prepared a lot for the songs and because of those who enjoyed our performance, we were able to enjoy our activities as well,” the members said in their acceptance speech. “We’ll repay the love with good songs and awesome performances in the future.” 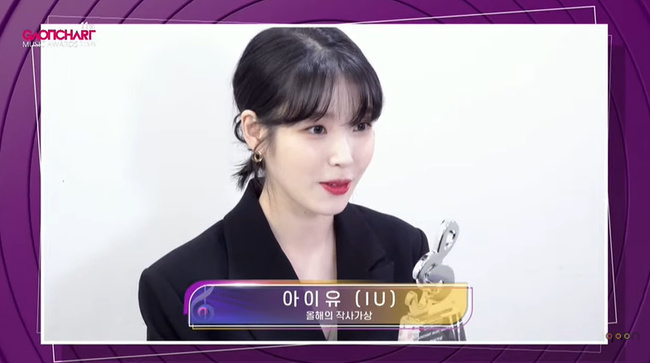 Singer IU delivers an acceptance speech via a video message after winning lyricist of this year at the 11th Gaon Chart Music Awards held on Thursday. (Screen capture of Gaon Chart Music Awards broadcast)
IU had the second-most wins this year. The singer’s “Celebrity,” “Lilac” and “Strawberry Moon” were chosen as the best songs for January, March and October of last year, respectively. She also received two additional awards for lyricist of this year and record production of the year.

Along with BTS and IU, Taeyeon of Girls’ Generation, SHINee, Kang Daniel, Brave Girls, Red Velvet, Twice, IZ*ONE, NCT Dream, and NCT 127 took home honors in the artist of the year categories. Lee Mu-jin and Lee Chan-won won rookie of the year awards with “Scent of the Day” and “Convenience Store,” respectively.