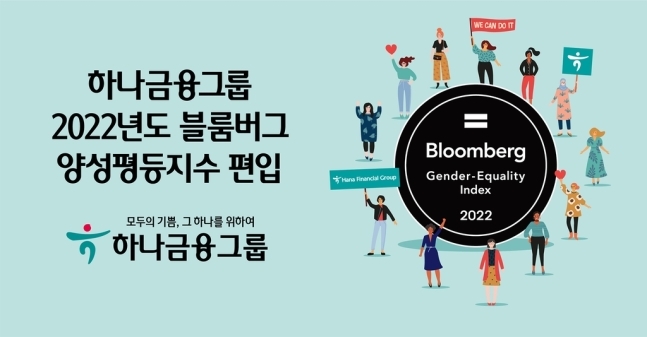 This marks KB and Shinhan’s fourth consecutive year, and Hana’s first time to be recognized by the GEI.

The GEI was expanded in 2022 to represent 45 countries and regions, and 418 public companies across various sectors, including finance, technology, and utilities. KB, Shinhan and Hana have been recognized alongside global financial powerhouses including Goldman Sachs, S&P and Bank of America.

KB Financial Group has been promoting gender equality in its workforce through its various mentoring and education programs such as Woman’s Empowerment Star Mentoring, KB Woman of Excellence and KB Securities’ Value-up. It officially supports the Women’s Empowerment Principles established by UN Women and the UN Global Compact Office.

KB is also the first among the five major banking groups here to hire more than one female in its group of seven outside directors.

Shinhan Sheroes -– a combination of words “she” and “heroes” -– has so far produced 186 female leaders and managers across 14 of the holding group’s subsidiaries and affiliates, the firm said. Cho Kyoung-sun, who was promoted in December as the new CEO of Shinhan DS, the group’s financial IT service unit, has completed the Shinhan Sheroes program.

On top of that, Shinhan has cooperated with the government in supporting more than 5,000 women with interrupted careers and 123 childcare centers across the country.

Recognized by the index for the first time, Hana Financial Group said its various parental leave programs were acknowledged by the GEI. Its slew of intracompany gender equality education programs and efforts to adopt a fair office culture were highlighted as well, according to the firm.

It has bolstered its efforts to expand female leadership within the firm, promoting five women to the roles of executives and ranking managers.

Though the field remains overwhelmingly male, Korea’s financial institutions have been making efforts to appoint more women to leadership positions amid their drive to adopt environmental, social and governance values.