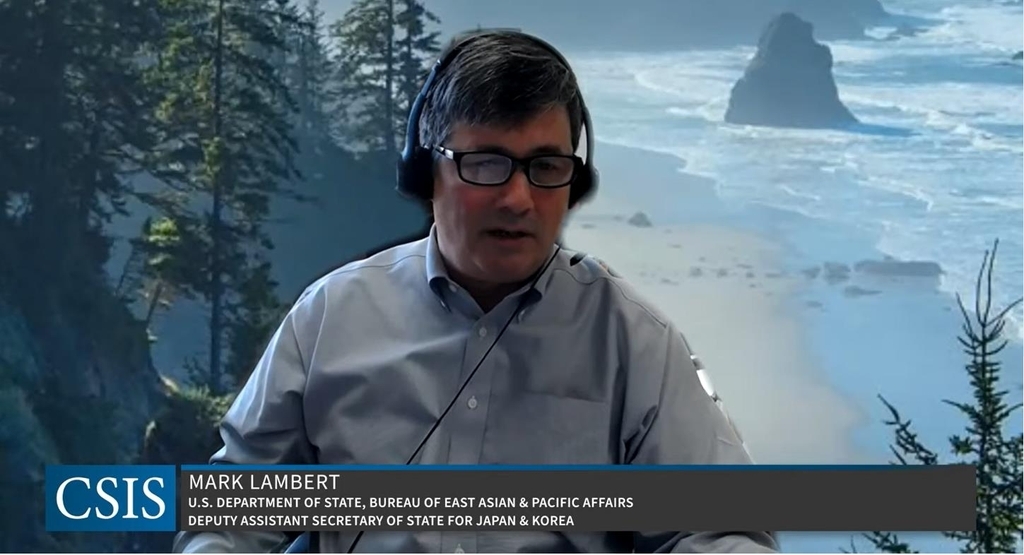 Mark Lambert, deputy assistant secretary of state for Korea and Japan, is seen speaking in a webinar hosted by the Washington-based Center for Strategic and International Studies think tank on Wednesday in this captured image. (Yonhap)
Many promising things can happen for North Korea if Pyongyang returns to the dialogue table with the US, Deputy Assistant Secretary of State for Japan and Korea Mark Lambert said Wednesday.

The US diplomat also stressed that the US has "no reservations" regarding dialogue with North Korea.

"We have made it very clear to Pyongyang. We will go anywhere. We will talk about anything. There are no reservations we have," he said in a webinar hosted by the Center for Strategic and International Studies, a Washington-based think tank.

"We have to have a serious discussion about the denuclearization of North Korea, and if North Korea is willing to do that, all sorts of promising things can happen," he added.

The remarks come amid North Korea's boycott of denuclearization talks with the US since late 2019. Pyongyang is also ignoring all US overtures since President Joe Biden took office a year ago on Jan. 20.

Lambert argued the COVID-19 pandemic may have prevented Pyongyang from returning to the dialogue table.

"I do think that COVID is playing a huge factor here," he said.

"The inability of the North Koreans to actually engage in any meaningful way with anyone, including their traditional friends in Moscow and Beijing, is affecting their ability to engage with us or with the South Koreans."

North Korea has maintained a strict border closure since the start early 2020, only to partially reopen its border with China earlier this month for cargo trains to and from China's border city of Dandong, according to earlier reports.

Lambert, who previously served as US special envoy for North Korea, said he did not know what North Korean leader Kim Jong-un was thinking, but that he is a "rational player" and that he is in fact a top decision maker in North Korea.

"I do not know what is motivating Kim Jong-un or those around him. I am confident he is the decision maker. I think he's a rational player," he said.

His remarks come after North Korea staged five rounds of missile launches since the beginning of the year.

"I would also argue that there is a recognition in both Seoul and in Tokyo that many of these challenges that we've talked about -- supply chain resilience ... need to have access to rare earths and the reliable flow of semiconductors and next generation batteries and other things -- would be best accomplished if Korea and Japan could work together," he added.

Seoul-Tokyo relations have been at their lowest ebb since mid-2019 when Japan began taking a series of economic steps, including the removal of South Korea from its list of trusted trade partners.

Many believe the Japanese measures were largely aimed at retaliating against Seoul court decisions that ordered Japanese firms to pay compensation to South Korean workers forced into labor during Japan's 1910-45 colonial rule of Korea.

Lambert expressed hope for improved relations between the two countries.

"I think I think this will be resolved to everyone's satisfaction. The question is when," he said, adding many people in both Seoul and Tokyo were already looking for an "off ramp." (Yonhap)