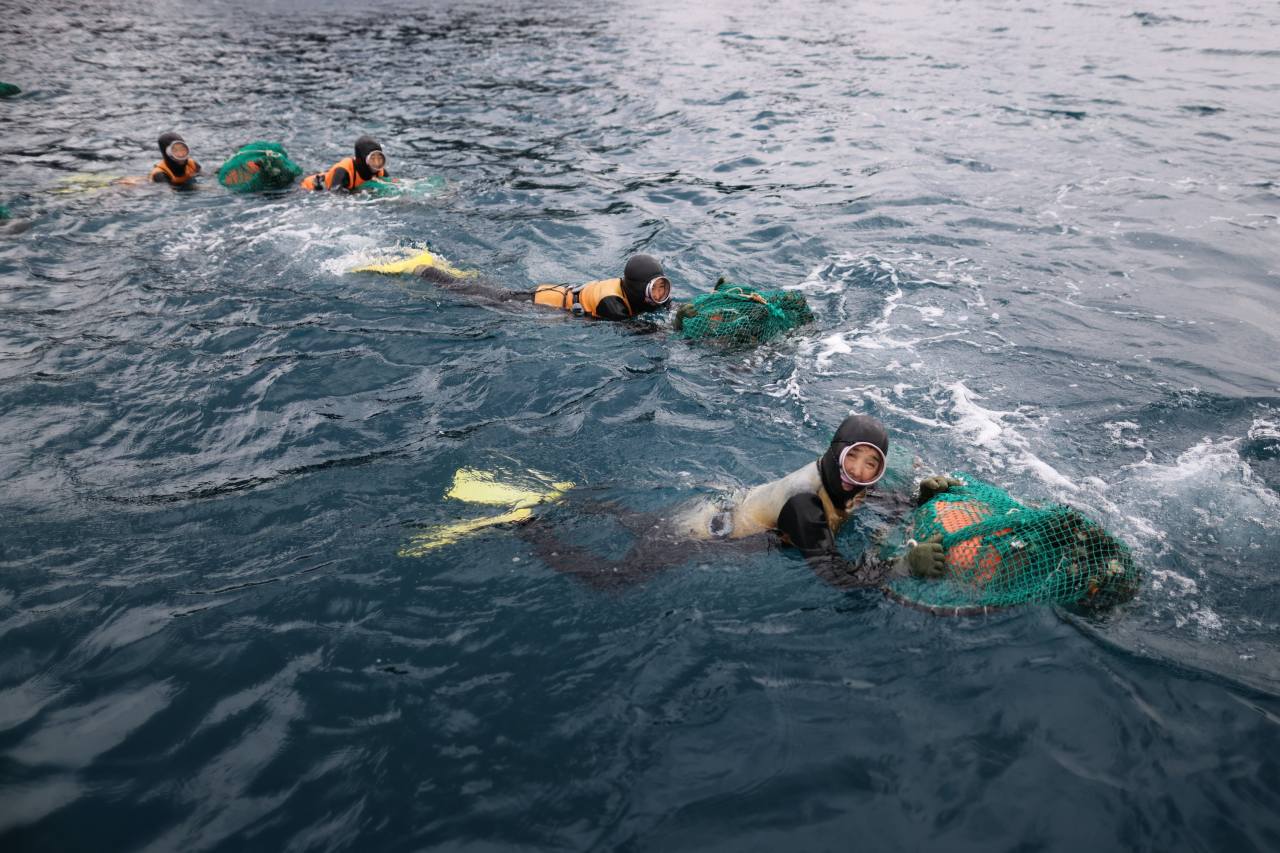 Free-diving haenyeo Koh Bok-im, 73, looks up as she approaches the boat in the waters off Chagwi Island near Jeju Island. Photo © Hyungwon Kang
On Jeju, Korea’s largest island, it’s common for women to wear the pants in the family. For a long time, the Jeju women, many of whom are primary income earners for their households, are literally responsible for putting seafood on our tables.

Jeju haenyeo, which roughly translates to “women of the sea,” are free-diving seafood gatherers who can hold their breaths for long periods as they harvest from the sea floor.

“They used to call us ‘jomnyeo’ which means diving woman in the Jeju dialect,” said Koh Bok-im, 73, a Jeju native who has been working as a Jeju haenyeo since the age of 18, following her mother and grandmother in the tradition of muljil, or diving for seafood.

“When I first started back in the day, abalones were very common but they are rare now. Nowadays, I typically harvest about 30 kg of sea snails called ‘sora,’ which we can catch from November through April,” she said.
“Sea cucumber season is during the months of February and March when the weather is cold. On a lucky day, I caught up to five octopuses in one day. But haenyeo don’t usually get to enjoy our harvest as we have to sell them for cash to raise and educate our kids,” said Koh, who has raised her five children by working in the sea.

Working as a haenyeo is indeed an extreme job.
“I dived during all of my five pregnancies. On the day I delivered my third child, my water broke during muljil and I just dropped everything and rushed home to deliver my boy,” said Koh, who had home births for all five with the help of her late husband’s aunt.

“When diving for seafood, my dive typically lasts about three minutes. I look for my target on my way down and usually catch something before I come up for air, but there are times when I come up for air empty handed,” said Koh.

“You need a friend when you‘re working in the water. We look out for each other,” said Koh. 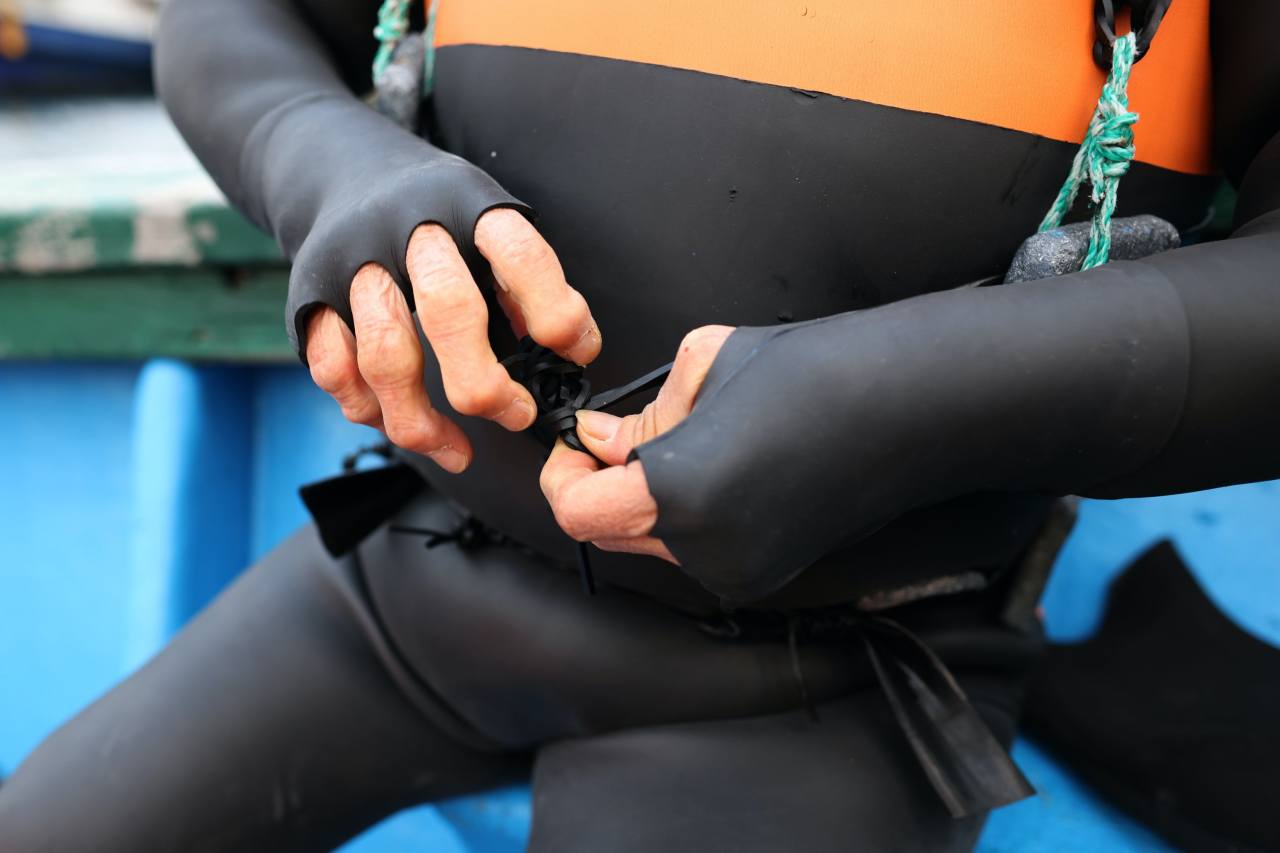 Working as a haenyeo is an extreme job. Photo © Hyungwon Kang
Haenyeo have to have each other’s backs when diving in dangerous sea waters. When a diver does not come up for air as she should, a haenyeo nearby drops everything to pull up a passed-out diver. That happened with Koh about 10 years ago during a haenyeo diving competition among representatives from several villages.

“A haenyeo from the Seogwipo area was diving in the water near me and she got too greedy. When she passed out and started sinking. I pulled her out of the water. Thankfully she woke up when her villagers slapped her back. I heard them scolding her for being too ambitious,” she said. The near-death incident put a stop to any future Jeju haenyeo diving competitions.

Jeju haenyeo have exported their expertise to Japan. “In my 40s, I worked out of Japan, where I was able to make 10 times more for the same work. Japanese waters are full of seafood as they aren‘t over harvested,” said Koh.

To prevent their diving masks from fogging up, haenyeo rub “ssuk,” or mugwort, inside the lenses. “Mugwort left inside the mask also helps clear your breathing,” said Koh.

Haenyeo use simple tools called “geolgaengi,” “homaengi” and “bitchang” to harvest abalones. Some use all three tools, while others only carry one of the three.

Haenyeo strap up to 10 kg of weight around their waists, to help them descend about 10 meters into the sea, and must constantly be kicking while staying afloat during their work. 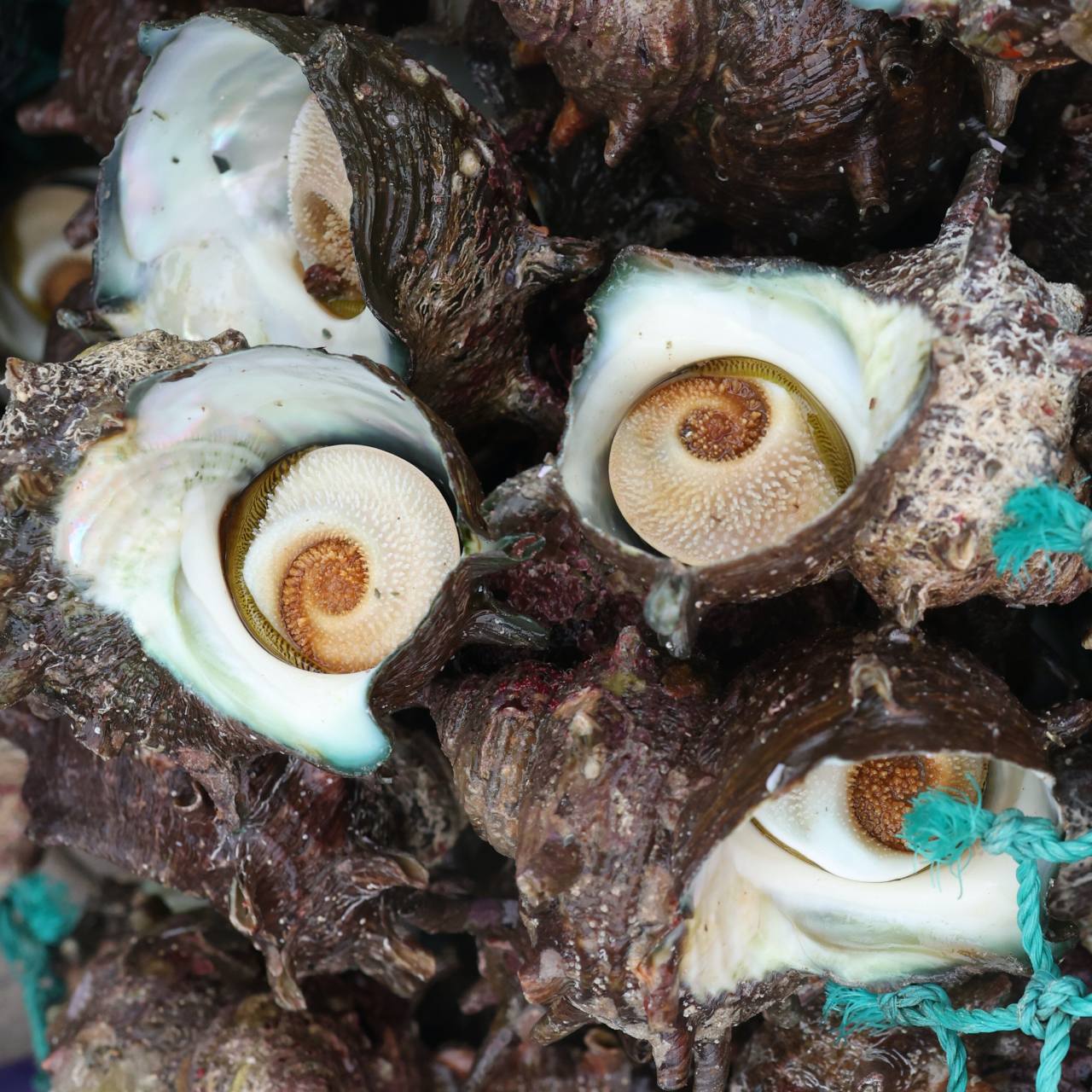 Sea snails, called “sora,” can be harvested from November through April off the coast of Jeju Island. Photo © 2021 Hyungwon Kang
Continuing the matriarchal tradition, Koh’s youngest daughter and her daughter-in-law have decided to become haenyeo.

Koh‘s youngest daughter Jwa Geum-ok, 41, recently joined her mother as an intern haenyeo upon graduating from a haenyeo school.

“I’ve been out in the sea about eight times and oftentimes returned with less than 5 kg of harvest. I once collected less than one kilogram. When my ears hurt as I descend underwater, swallowing pops my ears. When the weather isn‘t clear, it’s not very bright underwater,” Jwa said.
“My 73-year-old mother is a formidable diver. When I follow her down, my mother keeps diving downward while I have to turn back and come up for air. Sometimes I come up empty handed each of the five consecutive dives.”

“I‘m not sure if it’s a good time to become a haenyeo,” said Koh. “When I became a haenyeo, we were poor and didn‘t have much to eat. But with so much pollution in the water, there’s less to harvest from the sea. And with limited exports to Japan, working in agriculture might be a better choice for my girls.”

Koh, a grandmother to nine, plans to work in the water at least until she turns 80. Her husband died of cancer at age 45. “I was too busy working and raising my kids to think about getting remarried. Haenyeo work too hard, and I for one, am too tired for a relationship. Lots of husbands of haenyeo suffer because the wife is always too tired,” said Koh.

The Jeju dialect, with its own unique set of vocabulary, is also called the second Korean language. When haenyeo speak among themselves, their conversation is unintelligible to most Koreans from the mainland.

“Even I don‘t understand some of their words,” said Jwa. “And I was born in Jeju.”