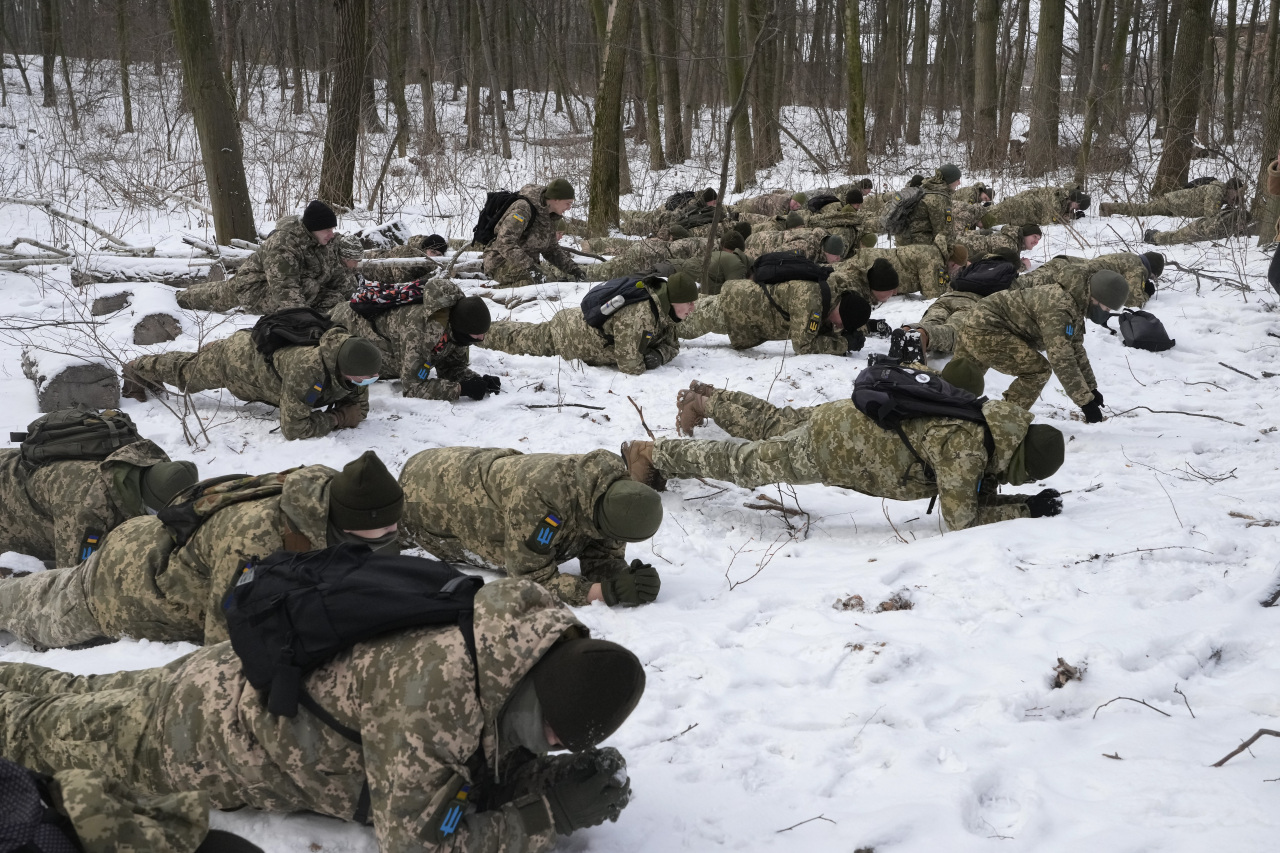 Members of Ukrainian forces and volunteer soldiers train in a city park in Kyiv. (AP-Yonhap)
South Korean government advised its nationals residing in 15 regions in Ukraine to leave amid heightened fears of a possible Russian invasion of Ukraine.

The Foreign Ministry on Tuesday additionally placed 12 provinces located in the eastern and northern regions of Ukraine, including capital Kyiv, Rivne, Sumy and Odessa, under the elevated travel alert, advising South Korean nationals to swiftly exit the region.

Fifteen out of Ukraine’s 25 provinces are now under a Level 3 travel advisory, including three provinces previously designated -- Crimea, Donetsk and Luhansk -- which are near the border with Russia.

The ministry also requested Korean nationals living in other parts of Ukraine to move to a safer place, considering uncertainties surrounding the country.

About 600 Korean nationals are currently residing in the country, with most of them in the capital and other nearby cities.

The Seoul government has been keeping a close eye on the escalating tensions caused by a Russian military buildup on its border with Ukraine, with its local embassy checking contingency plans and taking other actions to maximize the safety of nationals there.

As the US and the UK withdraw some embassy staff and their families from Ukraine -- and other countries follow suit -- the ministry official stressed the safety of the Korean nationals as a priority and declined to elaborate on whether Seoul is considering a similar withdrawal.

The South Korean Embassy in Kyiv is still operating normally, the ministry said.

The presidential National Security Council convened a meeting Tuesday to discuss the Russia-Ukraine conflict, on how it will affect South Korea’s economy and the situation on the Korean Peninsula, a senior presidential official said Wednesday.

The meeting evaluated the urgency and severity of the situation, and reviewed safety measures for citizens there, according to Park Soo-hyun, a senior presidential secretary for public communication.

He added that the Foreign Ministry and the National Intelligence Agency have been keeping close tabs on the situation from a month ago, and have been preparing safety measures for its nationals in case of potential military conflict.

The foreign and defense ministries and the spy agency are holding in-depth discussions with the US over the matter, he added.

Cheong Wa Dae’s statement appears to be in response to main opposition presidential candidate Yoon Suk-yeol, who slammed the Moon administration for lacking a response to the Russia-Ukraine crisis. Yoon said there was a need to secure the safety of Korean nationals in the country, including arranging flights for event of an emergency.