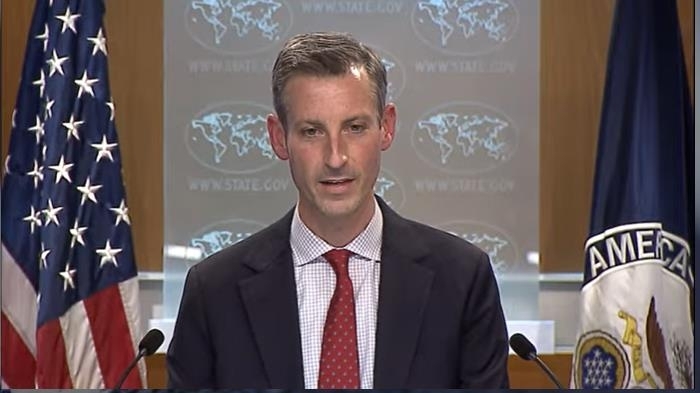 The spokesperson also reiterated that the US harbors no hostile intent toward North Korea.

His remarks come after North Korea launched what appeared to be two cruise missiles on Tuesday (Seoul time), marking its fifth missile launch so far this year.

"We think dialogue and diplomacy is the most effective means to help us reach that overarching goal and that is the complete new denuclearization of the Korean Peninsula," said Price.

North Korea has ignored US overtures for dialogue for over a year since Joe Biden took office as president in January 2021, citing what it claims to be US hostility toward the North. Pyongyang has also stayed away from denuclearization talks with the US since late 2019.

Another state department spokesperson earlier said the US was aware of the reports regarding North Korea's latest missile launch and that it was assessing the event with South Korea and Japan.

"Broadly speaking, as we have said our goal remains the complete denuclearization of the Korean Peninsula. We remain prepared to engage in serious and sustained diplomacy without preconditions to make tangible progress," the spokesperson told Yonhap News Agency, while asking not to be identified.

Unlike developing or testing ballistic missiles, cruise missile launches are not in direct violation of UN Security Council resolutions against North Korea.

North Korea claimed to have test fired a new "long-range cruise missile" in September, calling it a "strategic weapon of great significance."

Pyongyang has yet to comment on its latest missile launch.

Price highlighted the importance of working with US allies, as well as cooperation between US allies, to denuclearize the Korean Peninsula.

"You have heard us speak to our approach to the DPRK. It is a policy that was formulated in the early days of this administration that we developed in close coordination with our allies and partners, especially the ROK and Japan," he said, referring to South Korea by its official name, the Republic of Korea.

"We've had a number of engagements with them in the trilateral format, knowing the importance of trilateral cooperation when it comes to that ultimate goal, and that's the complete denuclearization of the Korean Peninsula," he added. (Yonhap)