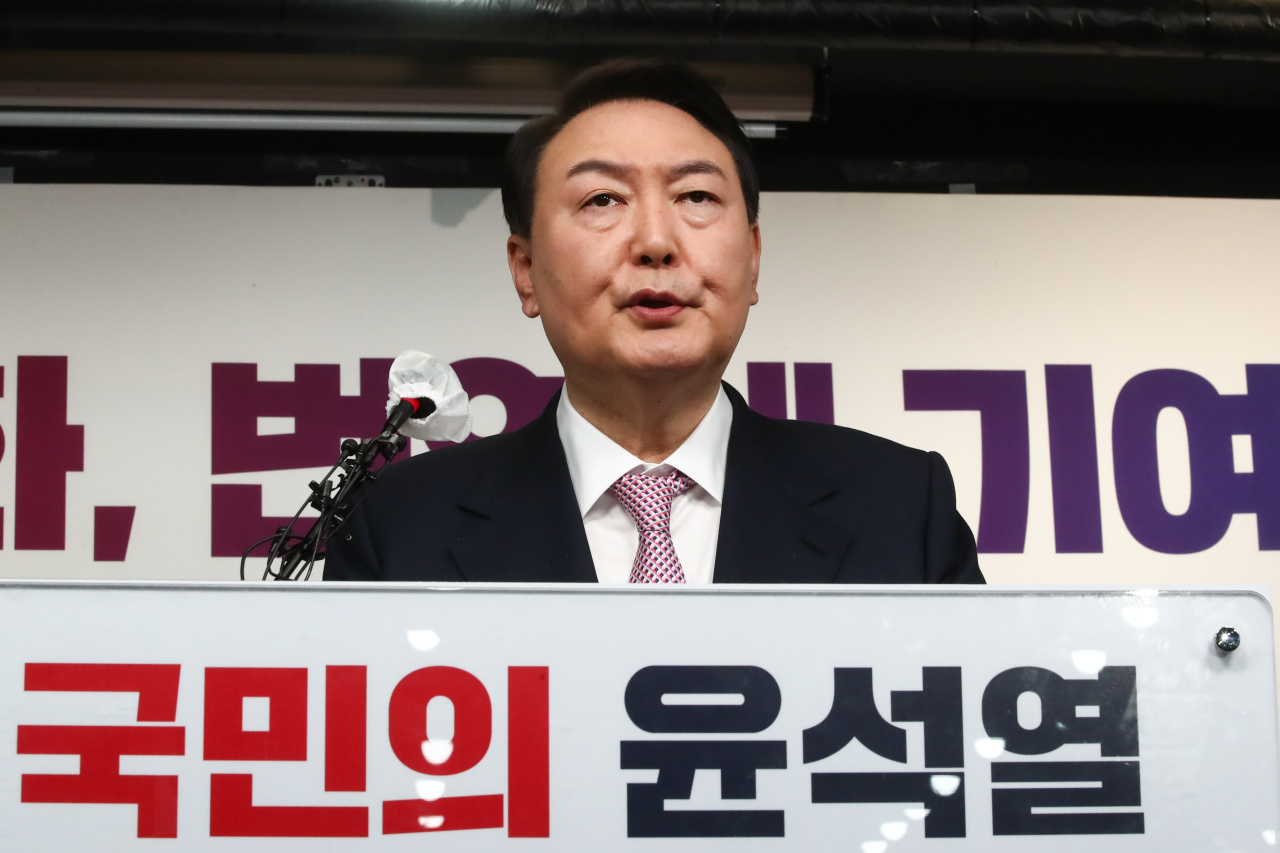 Announcing his 20 election pledges on diplomacy and defense policies -- four on North Korea, 11 on diplomacy and five on national defense -- Yoon vowed to normalize inter-Korean relations and strengthen South Korea‘s strategic alliance with the United States.

“If North Korea agrees to complete and verifiable denuclearization, we will be prepared to sign the peace treaty and provide utmost financial support to the North,” Yoon said.

Yoon pledged to work with international financial institutes such as International Monetary Fund to come up with massive investment and aid programs to provide to the North.

Yoon said international sanctions imposed against the North should be maintained until the communist state completely gives up on its nukes. But he is still willing to bring aid programs for the North when it shows efforts and progress in denuclearization, Yoon said.

Yoon stressed that having consistent principles is crucial to normalize ties with the North, and denounced the incumbent Moon Jae-in administration as “putting up peace shows.”

“Changing actions depending on the situation, and putting up peace shows cannot bring progress in improving our relationship with the North. It will only make the North think South Korea is useless,” the candidate said.

On the idea of holding inter-Korean summits, Yoon said it can only happen when agreements on concrete plans are made in advance.

Yoon also dismissed the possibility of South Korea’s nuclear armament as a way to deter nuclear missile threats, but said the country already has a strong weapons system that can cause “considerable damage” to any aggressors.

He also reiterated his statement that a preemptive strike is the only way to prevent the North’s nuclear missile attack.

The joint military exercises with the United States, which have been suspended or reduced in size by the current government, would also be revamped.

For the envisioned transfer of the wartime operational control (OPCON) from the United States, Yoon said the country will have to secure strong surveillance and reconnaissance capabilities.

While a stricter stance should be taken for denuclearization, Yoon said the humanitarian issues of the people in North Korea should not be neglected. Among the pledges, he said he will establish a foundation for human rights in North Korea.

On the country’s diplomacy, Yoon said he would make South Korea the “Global Pivot State,” and highlighted the importance of economic diplomacy and economic security.

In that plan, Yoon emphasized the importance of an alliance with the US, and said he would promote cooperation in the advanced technology and industry sectors as well.

Over the relationship with China, Korea’s biggest trade partner, Yoon said he would work to boost cooperation in the economic sectors for the interest of the two countries.