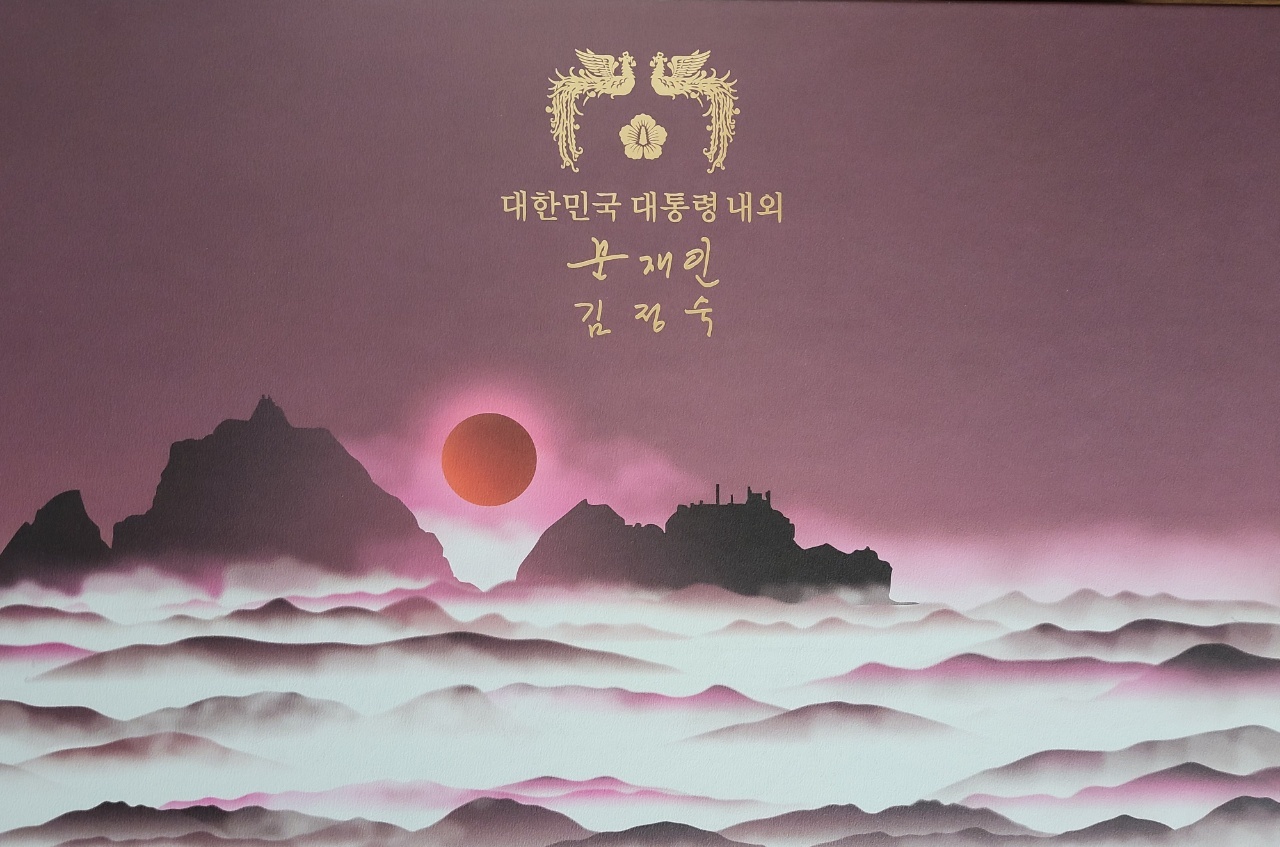 This photo shows the image on the box of South Korean President Moon Jae-in's gift sent to foreign ambassadors in the country to mark the Lunar New Year. (Yonhap)
Seo Kyung-duk, a well-known professor at Sungshin Women’s University in Seoul, on Monday slammed the Japanese Embassy in Seoul for rejecting President Moon Jae-in’s Lunar New Year gift that bears an image resembling the Dokdo islets on the gift box, saying it was an attempt to make the island an area of conflict.

Cheong Wa Dae had sent a gift box with chestnuts, traditional liquor and other items to all the foreign ambassadors, including Japanese Ambassador Koichi Aiboshi, ahead of the Lunar New Year on Feb. 1.

But the Japanese Embassy returned the gift Friday, taking issue with the box’s illustration of a sun rising behind islands, saying it was suggestive of Dokdo.

The islets, which are a constant source of dispute between the two countries, are where people can watch the first sunrise.

The embassy had also lodged a protest and renewed territorial claims to the islets.

“The Japanese government’s acts are clearly a territorial provocation. It is a scheme to make Dokdo an area of conflict internationally,” Seo, who has been vocal on historical and territorial issues with Tokyo, wrote on his Facebook.

“The best way to defend Dokdo, without being dragged into Japanese government’s scheme, is to strengthen publicity using (South Korea’s) cultural and tourism contents,” he said, stressing the need to introduce Dokdo to overseas audience, and vitalize tourism in Dokdo to expand awareness.

In regards to the Japanese Embassy’s refusal, Cheong Wa Dae has not officially commented on the matter.

The long-running row over who rightfully controls Dokdo has been a recurring source of tension between the two neighbors, as Tokyo continues to lay sovereignty claims in its policy papers, public remarks and school textbooks.

South Korea has been in effective control over the islets since its liberation from Japanese colonial rule in 1945. Seoul maintains that there is no territorial dispute as the Dokdo is “historically, geographically and by international law” clearly South Korea’s inherent territory. Japan disputes this.

Recently, Japan has been stepping up claims to Dokdo, with its new Foreign Minister Yoshimasa Hayashi last week said the islets are inherent to Japan in view of historical facts and international law.

The Foreign Ministry protested, urging Tokyo to stop its “futile” claims to Dokdo and demanded an immediate retraction.