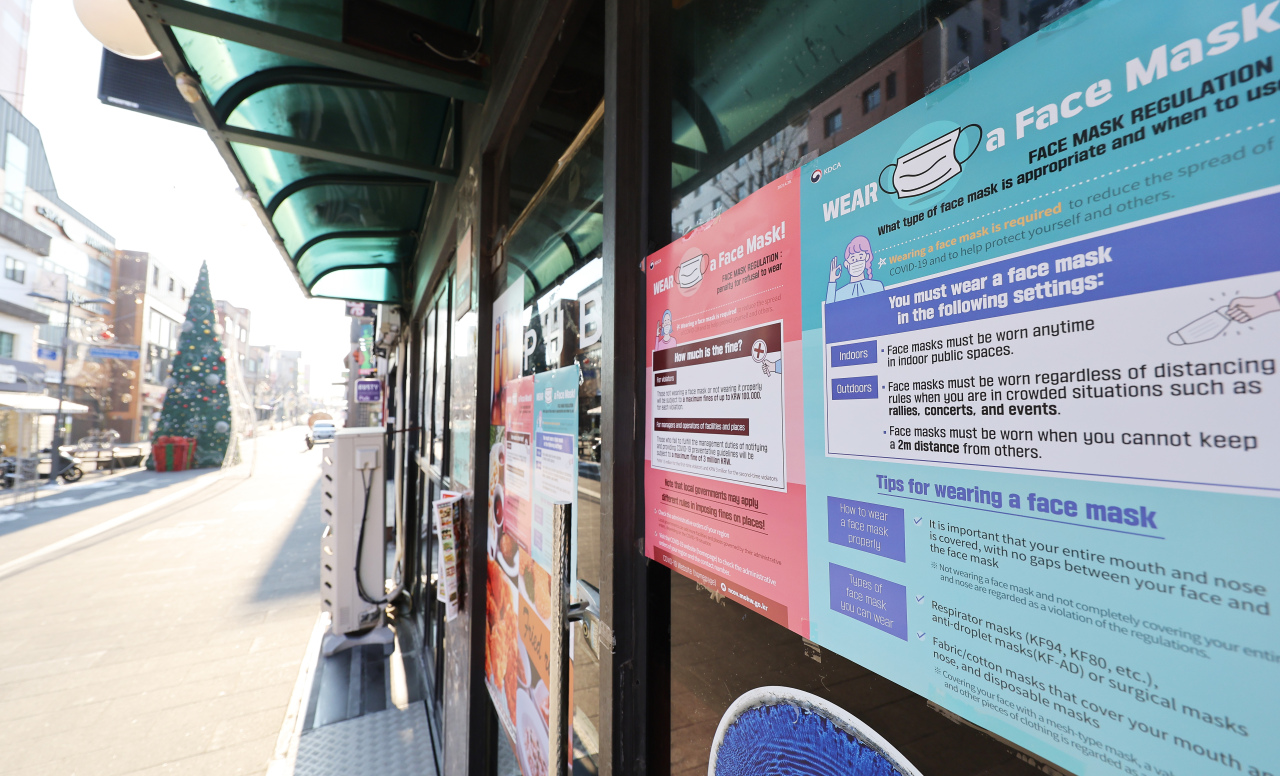 Rodeo Street in Anjeong-ri in front of Camp Humphreys in Pyeongtaek, Gyeonggi-do is quite on Thursday as infection is fast spreading around US military units. (Yonhap)
As the omicron variant spreads rapidly and daily caseloads exceeded 7,000 for a second consecutive day, the government plans to operate a new quarantine system nationwide.

As of Saturday midnight, the number of COVID-19 confirmed patients in Korea increased by 7,630 from the previous day, recording the second-largest figure to date. Of the newly confirmed cases, 7,343 were locally transmitted and 287 were imported.

The number of critically ill patients was 431, down two from the previous day, and in the 400 range for the fourth straight day. The number of deaths increased by 11 to a cumulative 6,540.

Daily case counts on weekends have tended to be smaller due to fewer tests being taken, but the spread of the omicron variant has led to an apparent increase, regardless of the day of the week. Among confirmed COVID-19 patients in Korea from Jan. 16-19, 47.1 percent were infected with the omicron variant.

Experts say the omicron pandemic has already begun. Shin Sang-yeop, an infectious disease specialist, said, “It is right to say that the pandemic of omicron has begun now. The domination of the omicron variant is unstoppable.”

The government plans to change the COVID-19 quarantine system to the “omicron response stage.” It sees that if new cases grow out of control and tens of thousands of confirmed cases are found per day, the current measures will face limits.

The quarantine period for those infected -- if they are fully vaccinated -- will be shortened to seven days from the current 10 days beginning Wednesday. The minimum age for COVID-19 “edible treatments” will be lowered from 65 to 60 years old from Sunday. About 460 pharmacies will remain operating to supply the oral medicines even on weekends and holidays.

Also from Wednesday, new measures will be applied first in four regions -- Gwangju, South Jeolla Province and Pyeongtaek and Anseong in Gyeonggi Province -- where the omicron variant has already become the dominant strain.

With the omicron measures are applied, polymerase chain reaction, or PCR, tests for COVID-19 will only be used for high-risk groups, such as close contacts and those aged 60 and older. Patients with mild symptoms will receive outpatient treatment and prescriptions at local hospitals and clinics and undergo home treatment. The treatment system will change to center on local clinics, with ear, nose and throat clinics to serve as primary response medical institutions.

Ambulances will mainly be provided to severely ill patients, and asymptomatic and mild patients will be asked to visit medical institutions using their own cars or quarantine taxis.

Quarantine authorities and experts predict that the number of confirmed cases will exceed 10,000 at the current rate of spread on the Friday following the Lunar New Year holiday, Feb. 4.

Senior health official Kwon Joon-wook said at a briefing Thursday, “If we fail to control the spread during the Lunar New Year holiday, we expect 10,000 to 15,000 new confirmed cases a day at the end of February.”

Nongovernment experts predict that as many as 100,000 confirmed daily cases could be reported at the peak. More than 30 million people are expected to be traveling during the Lunar New Year holiday.

Jeong Jae-hoon, a professor of preventive medicine at Gachon University, predicted, “As the omicron variant trend is faster than previous predictions, the caseloads may reach 10,000 next week and more than 100,000 at the peak.”