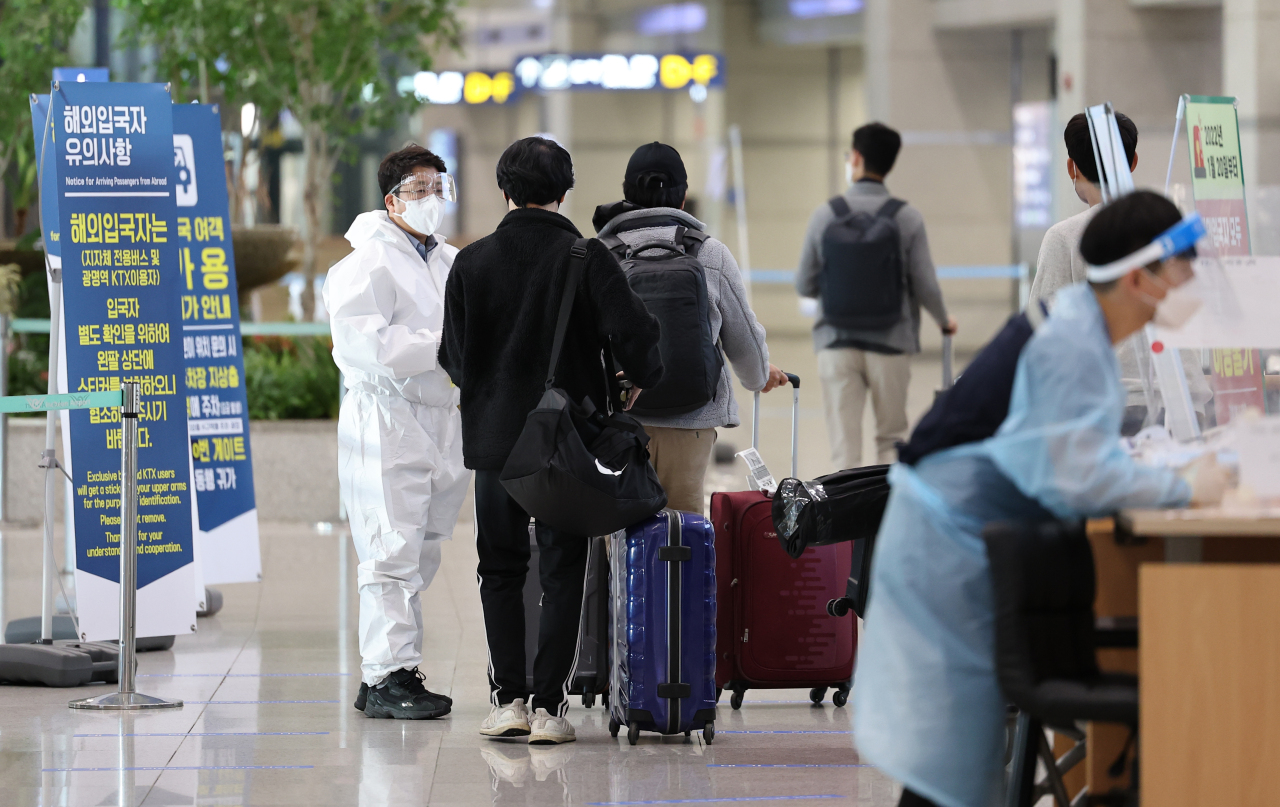 Passengers arrive at the Incheon Internationl Airport on Thursday. (Yonhap)
Omicron is spreading through South Korea at a faster pace with the potential to cause a sharper rise than earlier projections, according to an expert advising the government.

Dr. Jung Jae-hun, a preventive medicine specialist and COVID-19 adviser to the prime minister, said Thursday the omicron wave is “feared to be worse than previously thought.”

Three weeks ago, all of the scenarios modeled by Jung’s team showed more than 10,000 cases a day and up to 2,000 intensive care admissions by March, or late February if restrictions are eased. Speaking to The Korea Herald on Tuesday, he said as many as 50,000 cases a day is “entirely conceivable.”

Now Jung, who works with top national health institutions including the Korea Disease Control and Prevention Agency on COVID-19 response policies, says the daily peak could rise up to and possibly beyond 100,000.

“This is because, one, we had not been able to anticipate imported cases contributing to the spread as greatly (as they did),” he said over the phone. In the past week the infection rates among international passengers have risen to record levels of more than 300 a day.

“Given the global situation, I think it’s safe to assume most of them have omicron,” he said, explaining, “even if we were able to screen 90 percent of them upon arrival, at least 30 people will go on to spread it in the community unknowingly.”

He added that the calculations pertaining to the analysis were still incomplete.

This blow is somewhat cushioned by omicron’s reduced ability to cause severe disease, Jung said.

“Omicron’s severity is expected to be one-half to one-fifth that of delta,” he said. “Though we should note that in Korea, not that many have natural immunity, which makes it hard to predict just how less severe it’s actually going to be.”

Based on bed counts, Korea seems better equipped now than two months ago when a delta-related peak of over 7,000 cases a day filled hospitals, he said.

“Now we have twice as many critical care beds, according to the Ministry of Health and Welfare numbers. Assuming that omicron severity turns out to be about a third of delta’s, hospitals could hold up to a larger outbreak of around 40,000 cases (per day).”

Beyond that point, hospitals “won’t be able to keep up,” he said. “Then we might need to consider some form of intervention, like an emergency stop.”

The government has said that after entering the omicron phase, the country would desert the test, trace and treat regimen of controlling the pandemic.

For the 24 hours of Wednesday, the count of new cases hit 6,603, close to the government-set threshold of 7,000 for transitioning to a strategy “attuned to the characteristics of the omicron variant.”

Under the omicron strategy, PCR testing, contact tracing and border screening will be curtailed, according to the government announcements so far. Hospital treatment will be primarily given to at-risk populations while the rest recover at home.

Jung said these signals of restrictions loosening up seem to have expedited omicron’s march as well.

He said that wider distribution of Pfizer pills, called Paxlovid, and booster vaccinations are hoped to counter omicron’s impact.

Over the three days since around 20,000 courses of Paxlovid arrived in the country, just 39 patients have been prescribed the oral antivirals. This is far less than the government promise of getting the pills to 1,000 patients per day.

In a closed-door briefing Thursday, Ministry of Health and Welfare spokesperson Son Young-rae said omicron was “certain” to become dominant in Korea within days, and that the next three weeks would be a “critical juncture” with the Seollal holiday coming around.

Last week, the proportion of omicron in sequenced samples jumped to 26 percent from 12 percent a week prior. As omicron’s share is doubling on a weekly basis, it is anticipated to reach 50 percent sometime this week -- the mark for obtaining dominant status.

Son said that hospitals nationwide have room to cope with the looming omicron wave, with about 20 percent of their intensive care beds currently occupied -- down from over 80 percent during the December surge. PCR testing capacity has been ramped up to be able to carry out 700,000 tests a day.

Although Son said the ministry, along with other concerned government agencies, would “review moving on to the omicron-specific strategy” after the 7-day moving average of cases cross 7,000, President Moon Jae-in called on the Prime Minister’s Office and the rest of his Cabinet to “make a shift toward the omicron response strategy promptly” later that same day.

The president said in a written briefing that omicron becoming dominant was “an unavoidable reality.”

“The good news is that the severe cases are on the decline,” he was quoted as saying. “As we have so far, if we work together again this time, we can overcome the omicron wave.”

On the mixed messages over the point of shift in response, the ministry said in a release to reporters, “The government COVID-19 response headquarters and Cheong Wa Dae are on the same page that the transition will proceed in a speedy, and smooth fashion.”

“The preparations for the transition toward an omicron response are underway, and the government will communicate to the Korean people of the upcoming changes in the near future,” it said.