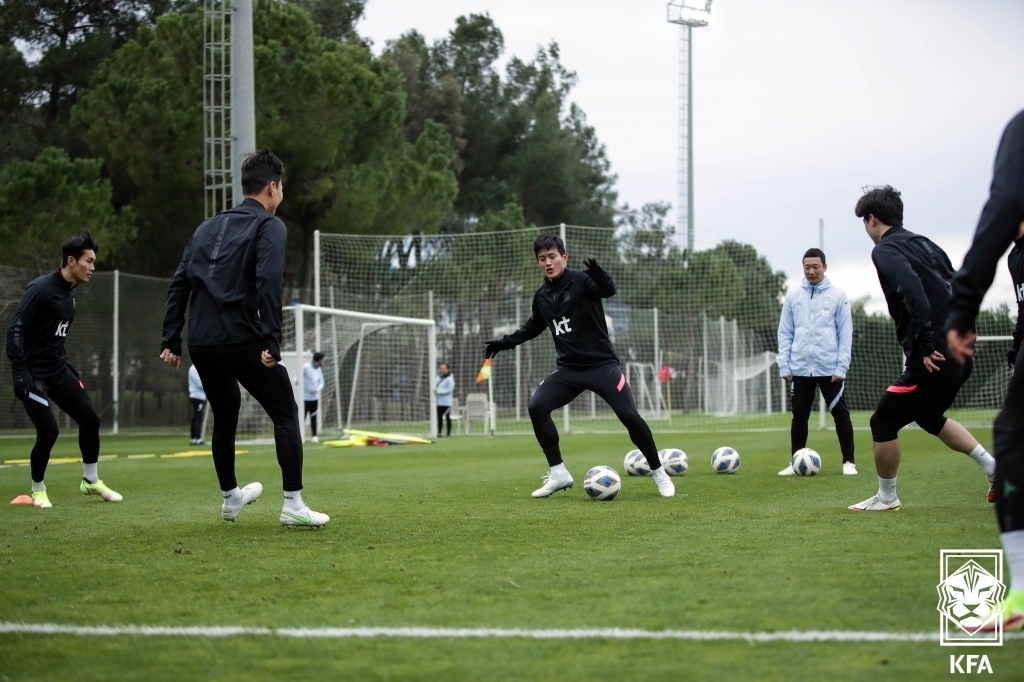 Members of the South Korean men's national football team train at Cornelia Diamond Football Center in Antalya, Turkey, on Tuesday, in this photo provided by the Korea Football Association. (Korea Football Association)
South Korea will take on Moldova on Friday in their final men's football friendly match before their World Cup qualifying campaign resumes, with domestic league players getting their last shot to stake their claim for roster spots.

The second-ever meeting between the two countries will kick off at Mardan Sports Complex in Antalya, Turkey, at 2 p.m. local time, or 8 p.m. in South Korea.

It will be the last tuneup match for South Korea before they face Lebanon on Jan. 27 in the final Asian qualification round for the 2022 FIFA World Cup. Currently sitting in second place in Group A, South Korea will also play Syria on Feb. 1 in Dubai as the neutral site.

South Korea head coach Paulo Bento set up training camp in Antalya earlier this month to prepare for the World Cup qualifiers. He currently has 25 players from South Korea's K League and two more from Japan's J. League. Bento has since added six players from Europe and the Middle East, and they will join the rest of the team next Monday.

After the Moldova match, Bento will make a few last-minute cuts.

South Korea beat Moldova 1-0 in their first match in January 2018, also in Antalya, as they were gearing up for the FIFA World Cup later that year. Fresh off a 5-1 rout of No. 62 Iceland on Saturday, world No. 33 South Korea should have little trouble against the 181st-ranked Moldova.

Bento's focus will be mostly on how new faces from the Asian leagues fit into his scheme, rather than on the match result itself.

A couple of those European club players have been left off the team for now, with Bento hoping they will recover from their injuries in time for the World Cup qualifiers.

Son Heung-min of Tottenham Hotspur and Hwang Hee-chan of Wolverhampton Wanderers are both nursing lower body injuries. Their respective clubs previously ruled them out of action for January, but Bento has said he will wait until the last possible moment to make his final call on those two.

Stating the obvious, Bento said last week Son and Hwang are "two important players, players that have features to create many situations in the attacking phase."

All of Bento's cuts are expected to involve K League players. The two players from J. League, goalkeeper Kim Seung-gyu and defender Kwon Kyung-won, have long earned Bento's trust. And the coach is obviously not going to cut players from Europe and, in the case of midfielder Jung Woo-young, Qatar, only days after naming them to the squad.

Several players made their senior international debuts against Iceland, and Bento is expected to once again give new faces a long look against Moldova. (Yonhap)