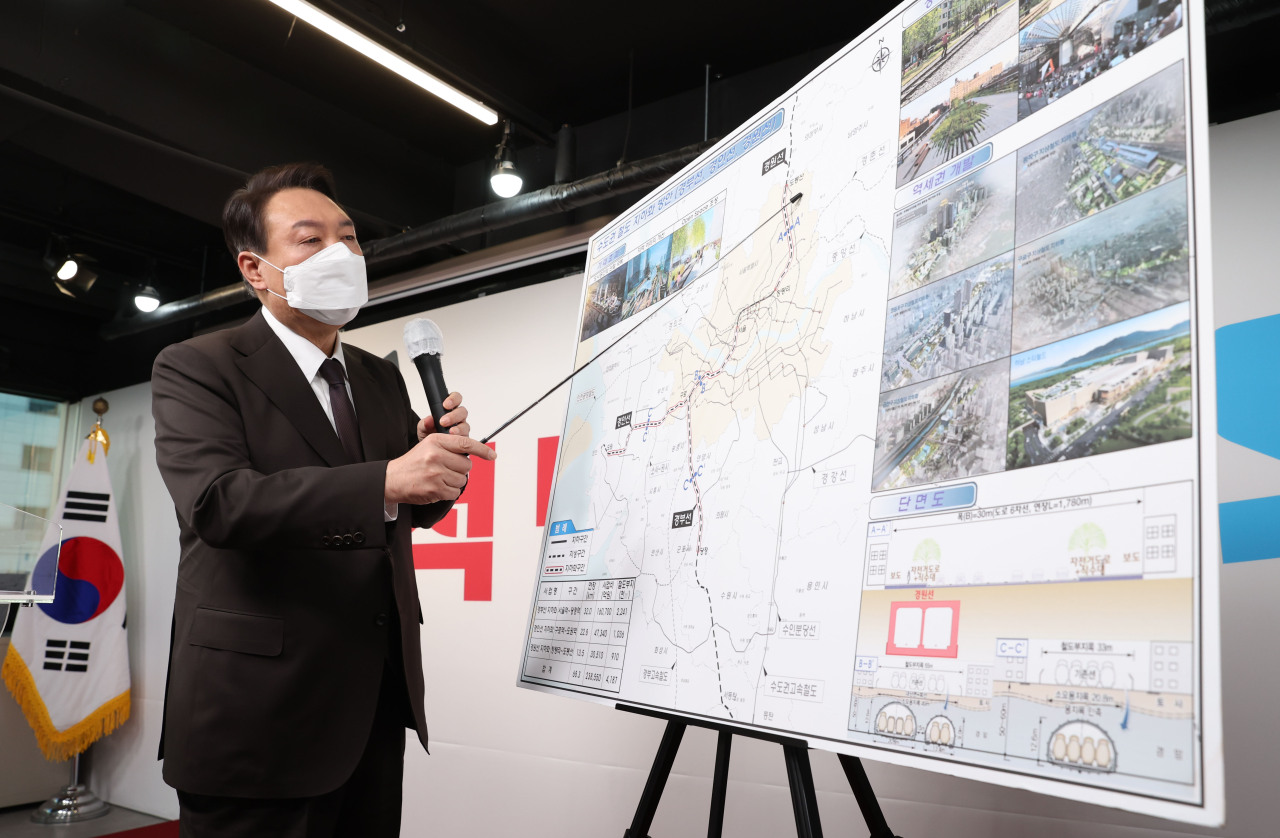 At a press briefing, Yoon laid out four vision pillars with nine detailed pledges for Seoul, including plans to supply some 500,000 new homes and to foster the city as a global hub for finance and startup companies.

“I will create Seoul to be more refreshing by moving railroads and highways located on the surface to underground, and provide faster and more convenient transportation services,” Yoon said.

Under Yoon’s plan, portions from Yangjae IC to Hannam IC of the Gyeongbu Expressway will also be rerouted underground, as part of a plan aimed for improvement of the highly congested road.

Spaces where railroads and highways are removed would be transformed into residential and work spaces and parks, the candidate said. The project is expected to create some 200,000 new jobs, Yoon’s campaign team explained.

The presidential nominee would also extend the DX Line to northern areas of Seoul. The DX Line is a subway line that currently goes from Gangnam Station to Gwanggyo Station in Suwon, Gyeonggi Province.

The presidential nominee also laid out plans to turn Seoul into the hub of finance and a nest for startup ventures.

Yoon proposed to designate Yeouido, a Seoul district where major financial institutes are located, as a special financial district and establish an Asia stock exchange there.

Geumcheon-gu in southwestern Seoul would be labeled “K-Startup County” and developed into a startup hub for young entrepreneurs, Yoon said, adding he will come up with a state-led system to foster unicorn companies, or those worth over a $1 billion.

Aside from the city rebuilding plans, Yoon also promised to adopt “science-based” social distancing regulations for preventive measures against the COVID-19 pandemic, purportedly in contrast to those of the incumbent administration.

“It is not as if COVID-19 moves more actively when it is after 9 p.m. The chance of infection is lowered when people wear masks, so it (does not make sense) to adopt the vaccine pass at libraries and grocery stores where they buy books and goods,” Yoon said, referring to the government’s ban of shops operating after 9 p.m.

“The preventive measures against the COVID-19 pandemic should be based on science, and they should be balanced.”

For indoor spaces where masks are worn at all times and people do not speak much, such as libraries, museums, theaters and religious facilities, the vaccine pass system -- asking for proof of vaccination for entrance -- would be removed, the presidential nominee said.

Yoon promised to also relieve social distancing measures for indoor spaces such as restaurants, cafes and karaoke rooms if they fulfill the specific ventilation conditions that the candidate intends to prepare later.