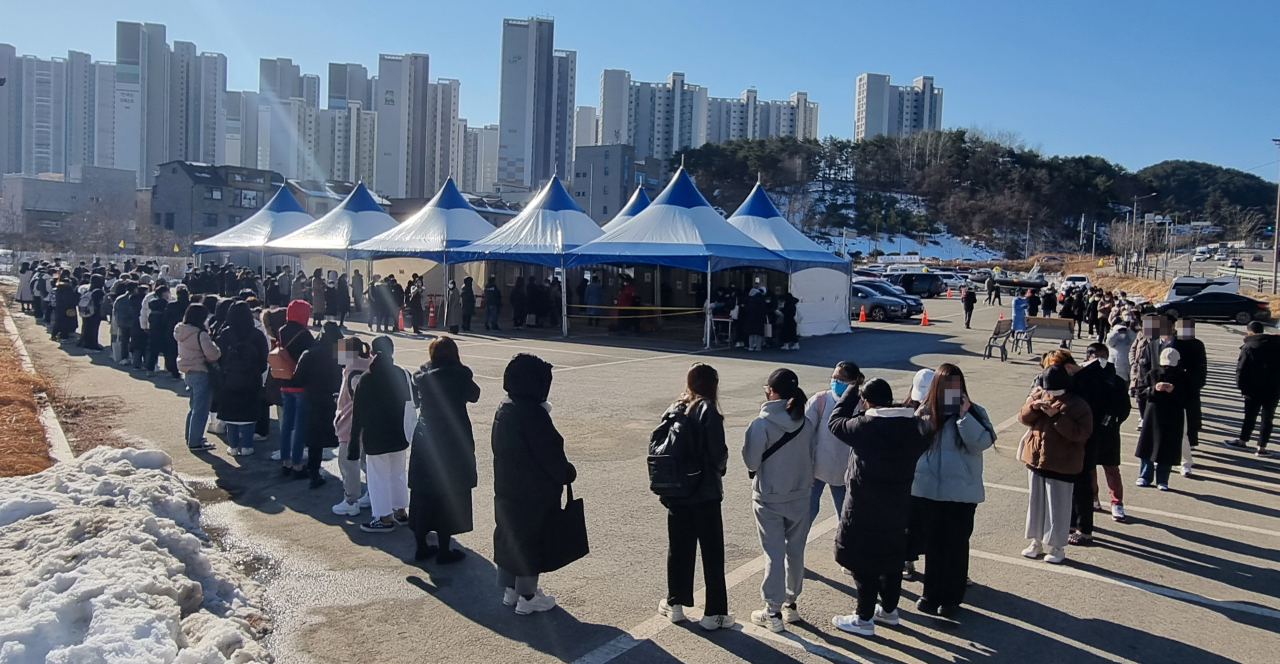 People wait in line to receive tests at a COVID-19 testing station in Gangneung, 237 kilometers east of Seoul, on Jan. 6, 2022, when the country reported 4,126 new cases. (Yonhap)
South Korea's daily coronavirus cases stayed above 4,000 for the fifth straight day Sunday as health authorities remain vigilant over a possible upsurge in infections and the spread of the omicron variant ahead of the upcoming Lunar New Year holiday.

The country added 4,194 new COVID-19 infections, including 3,813 local infections, raising the total caseload to 692,174, according to the Korea Disease Control and Prevention Agency (KDCA).

The figure was smaller than the previous day's 4,419 but marked the fifth consecutive day that the figure was above 4,000.

The country reported 29 more COVID-19 deaths, raising the death toll to 6,310, according to the health authorities. The fatality rate came to 0.91 percent.

The number of imported cases was tallied at 381, compared with a daily high of 409 reported Friday.

The number of critically ill COVID-19 patients stood at 612, down from the previous day's 626.

The daily cases are showing signs of staying relatively lower after reaching a daily peak of nearly 8,000 cases in mid-December, but health authorities remain on alert over a potential upsurge in infections and the spread of the omicron variant.

Of particular concern is a possible resurgence during the Lunar New Year holiday later this month when a large number of people tend to travel for family reunions.

To stave off a further increase in infections, the government plans to maintain a 9 p.m. curfew on restaurants and cafes while raising the limit on the size of private gatherings to six from the current four. The revised rules will be in place from Monday through Feb. 6.

Those restrictions were back in place after the government eased long-enforced antivirus restrictions in early November as part of efforts to return to normalcy in phases under the "living with COVID-19" scheme.

Daily cases, however, soared to a record high of 7,848 on Dec. 15, prompting the government to reimpose a set of revised virus restrictions for two weeks, which were originally supposed to end Sunday.

With domestic cases still dominant, imported cases recently increased sharply, causing the government to ban all entrants' use of public transportation upon arrival and tighten rules on the proof of negative COVID-19 test results starting this Thursday.

Of the domestic cases reported Sunday, 826 cases were confirmed in Seoul, 1,511 in the surrounding Gyeonggi Province and 235 in the western port city of Incheon.

A total of 43.5 million people, or 84.8 percent of the country's 52 million population, have been fully vaccinated, and 23.3 million, or 45.5 percent, have received booster shots, the health authorities said. (Yonhap)