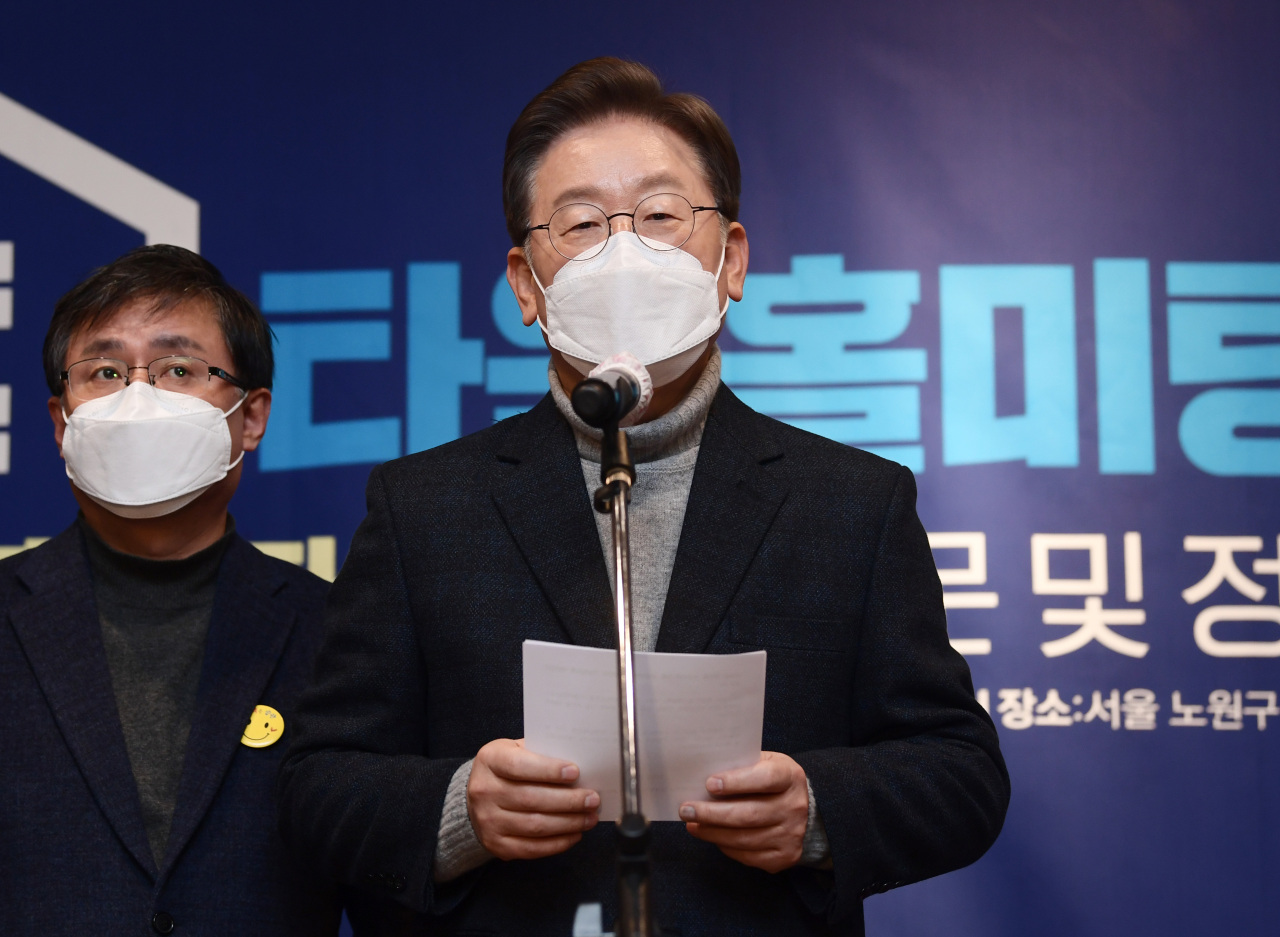 Lee said in a campaign event Thursday held at a reconstruction site in Nowon-gu, northern Seoul that he deeply regrets that his party failed in terms of control the real estate market, saying especially those who live in northern parts of Seoul experienced much difficulty.

"I really can't say much on real estate," Lee said. "I once again deeply apologize to the people for making them suffer from real estate and housing problems."

The district Lee visited is one of the areas in Seoul with a high demand for reconstruction and redevelopment projects, as most of the apartments were built in the 1980s but have not gained approvals to overhaul or renovate.

Lee said in a following announcement that his government will focus on controlling the demand for speculation while having the state take control in supplying more affordable housing units.

He believes providing regulatory legroom on reconstruction and redevelopment projects will allow new apartment complexes to be built with more appealing units. Lee acknowledged that past liberal governments have overly restricted these real estate projects and ignored people’s demand for better homes.

"I know there could be criticism from my support group, but I believe we need to push for reconstruction and redevelopment projects by easing limits on floor area ratio and the number of floors," he said.

"Reconstruction and redevelopment are important means to provide residential units in the city while stopping areas from becoming slums and improving the quality of lives for those in the area."

The presidential nominee also said he plans to revise standards on approving reconstruction projects so that old, degrading homes can be reconstructed swiftly as needed. Many of these reconstruction efforts will be led by state-owned entities, he said, while those with financial difficulties are provided with support funds for relocation if needed.

"I know too well that many people are disappointed with the government and the Democratic Party of Korea on this real estate issue, and as the presidential nominee of the ruling party, I feel a huge burden from this," he said.

Lee added he plans to open up an opportunity for multiple homeowners to sell their second or third homes without making losses by providing tax exemptions. He denounced the Moon Jae-in administration‘s inflexibility in approaching the issue, which has yielded negative outcomes for years.

His vision has been met with sharp criticism from the opposition, which denounced Lee for ignoring people’s right to own and purchase properties and having the state effectively force people to make financial decisions, limiting the freedom of choice.

Lee’s rival Yoon Suk-yeol of the main opposition People Power Party has instead focused on permanently reducing tax burden for homeowners, even though he is on the same page with Lee on the need to provide more homes in solving the real estate fiasco.