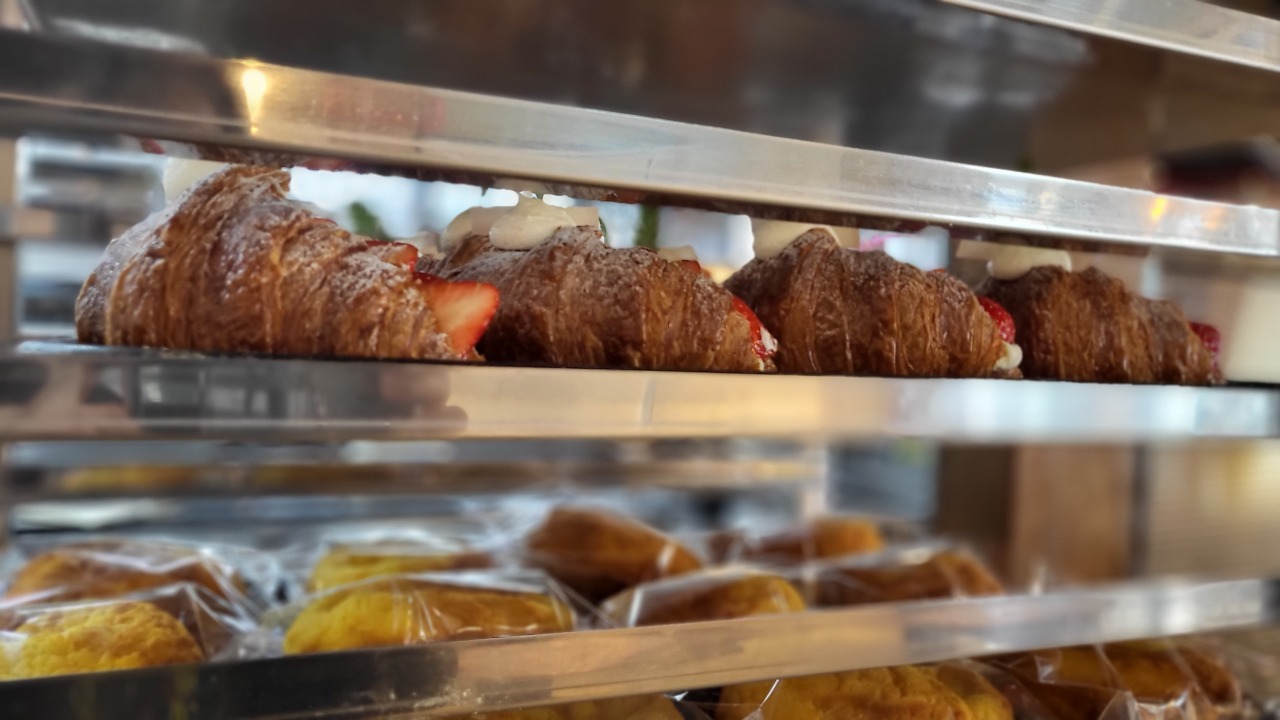 Baked croissants are lined up in trays, ready to be served to customers. (Kim Hae-yeon/ The Korea Herald)
Over the past two decades, large-scale franchise bakeries have swept across the country, growing in numbers to a point where it seems there is at least one franchise around the corner offering the standard cakes and baked goods.

In recent years, however, independent bakeries serving items fresh out of the oven alongside warm drinks have been on the rise, not just in big cities but more often on city outskirts. These “destination bakeries” attract customers with unique interiors and creative menus updated regularly.

Ample seating is another reason for the popularity of megasized bakeries among those who wish to linger, often to enjoy the scenery that unfolds outside the window.

Destination bakeries are typically located an hour or two by car from the city, making them ideal for a special weekend brunch as well. 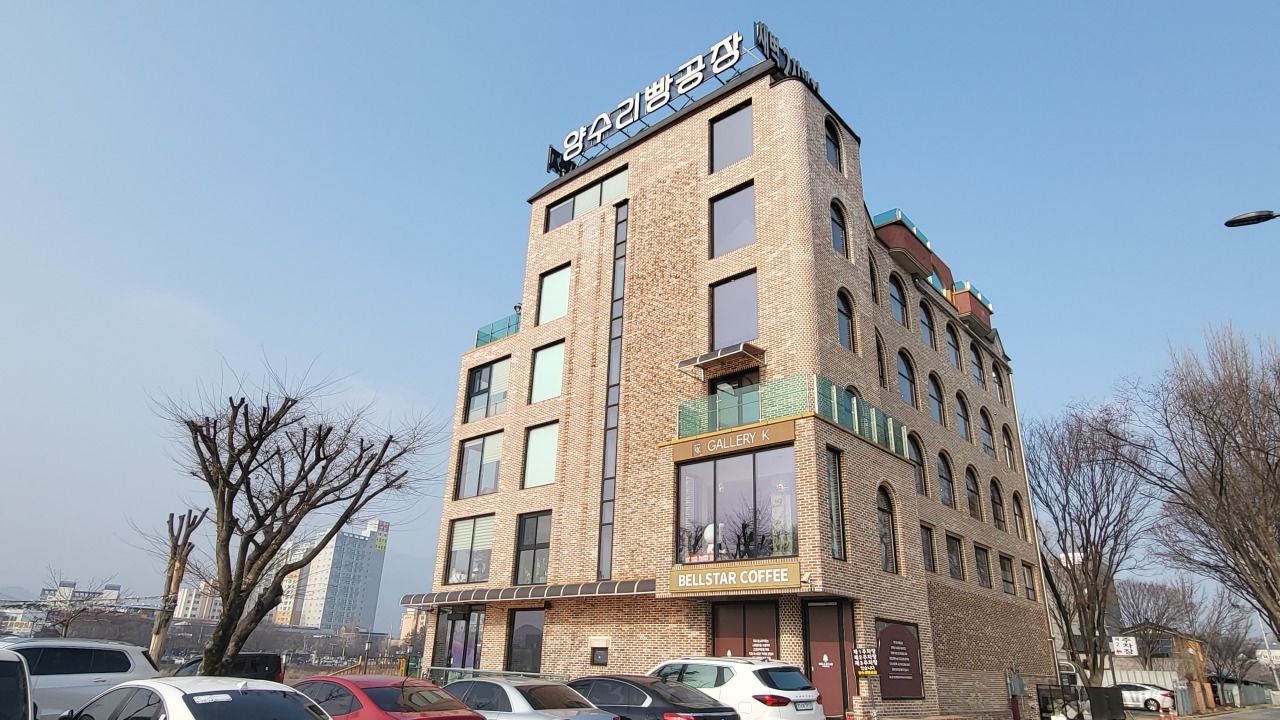 If overwhelmed by the variety of baked goods on offer, help is at hand: The most popular items are placed on trays numbered one to three, while staff recommendations are on separate display.

“To vote on the best bread, our staff, including the bakers, hold tasting sessions four times a year. We can tell our customers rely on our choices and we are very proud of that,” Yang In-hye, the store manager, told The Korea Herald on Jan. 7.

The outdoor terrace tables are fully booked on weekends by pet owners and families with young children, according to Yang. All baked goods are produced and sold the same day, with unsold items donated to Pushpin, a nongovernmental organization that supports neighboring communities. 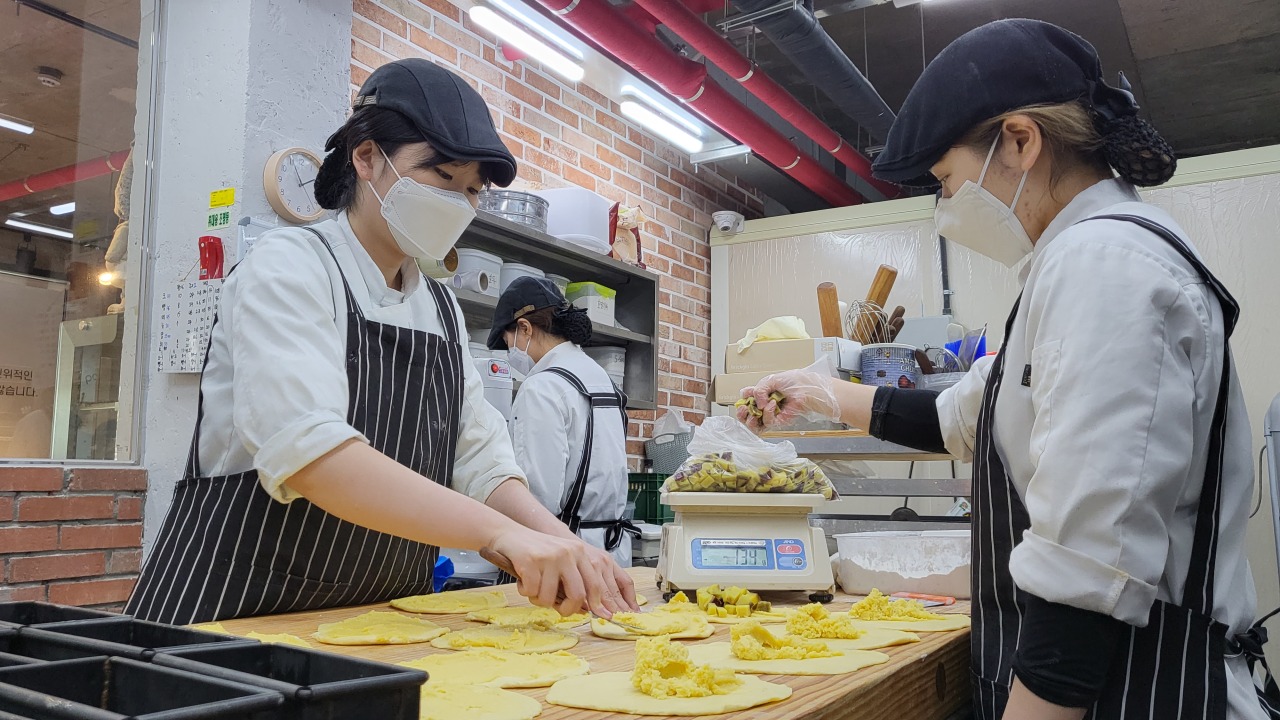 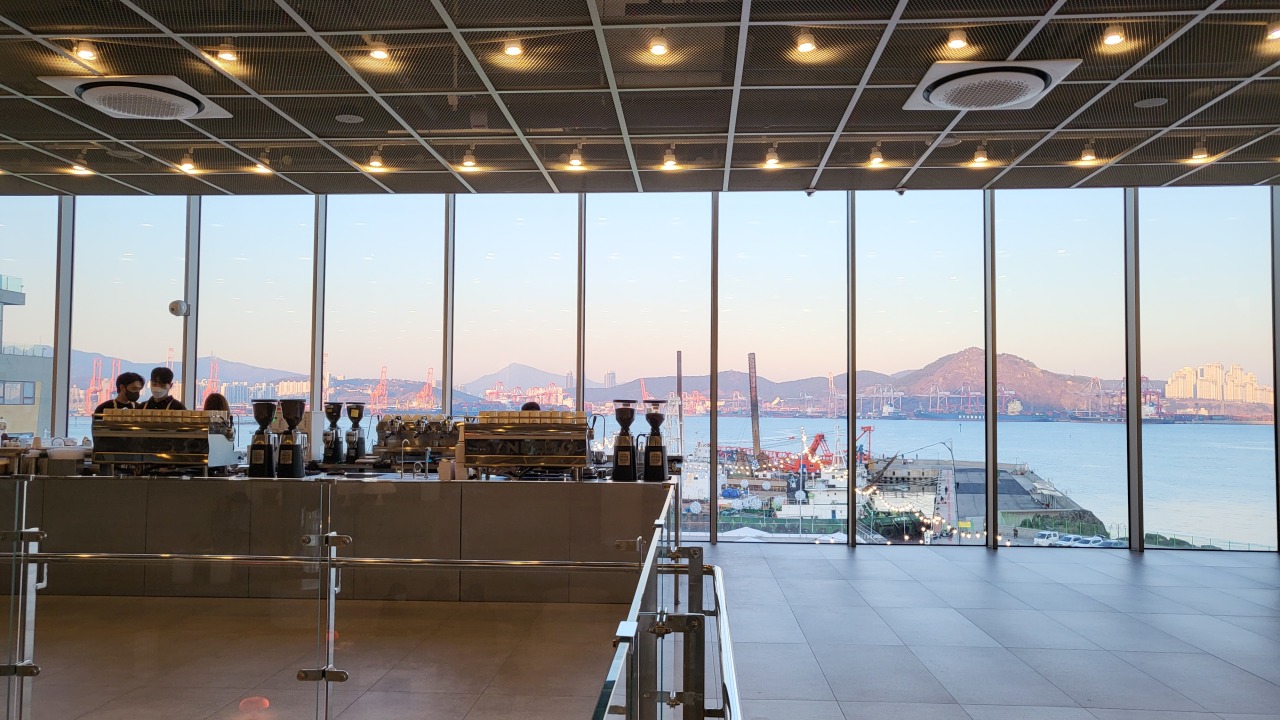 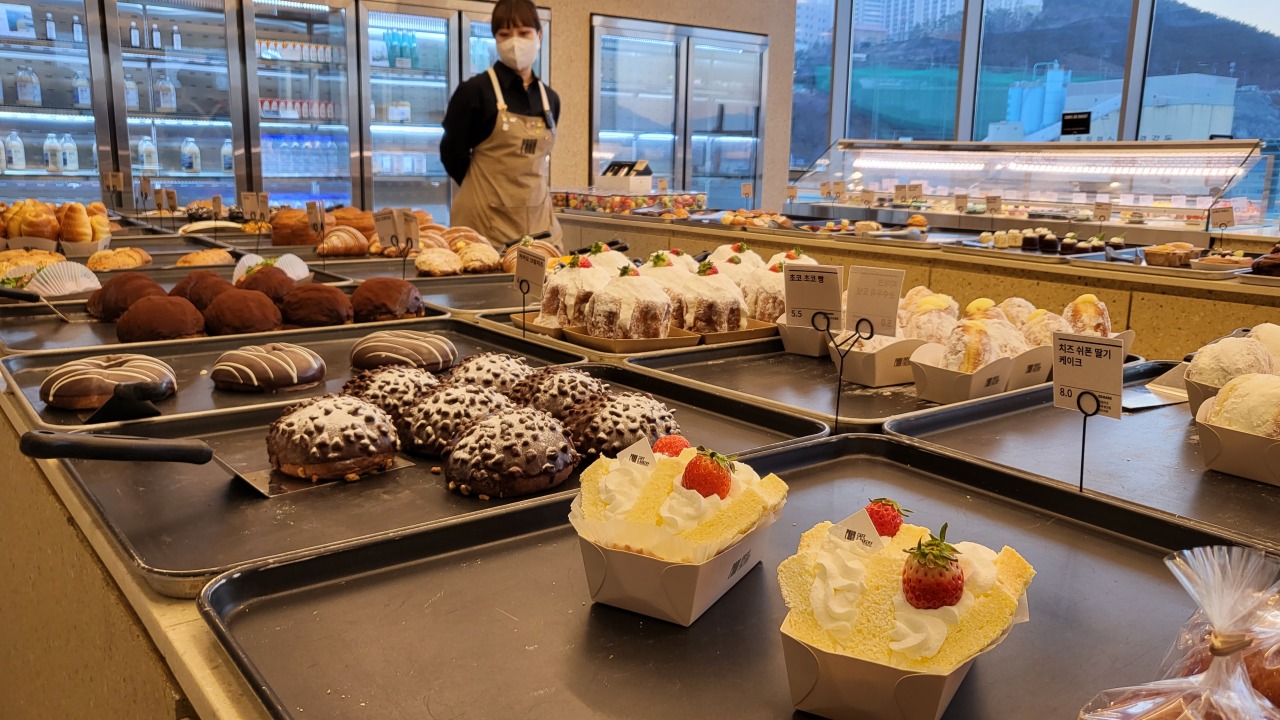 Store staff check on the conditions of items on display at the P.Ark Cafe and Bakery. (Kim Hae-yeon/The Korea Herald)
On Saturday afternoon, a wide age span of customers from young couples to large families were busy choosing from the great variety of bread and baked goods items.

“I recently found this place on a popular website with a list of bakeries where you can stay to eat near Busan,” a man in his 60s said. “My wife is very discerning when it comes to bread, and she declared this place to be top notch. I enjoy this beautiful view that changes in color whenever I come, so we drive here often.” One of the signature items developed by the bakery is its squid-ink cream cheese donut, which consistently sells out. 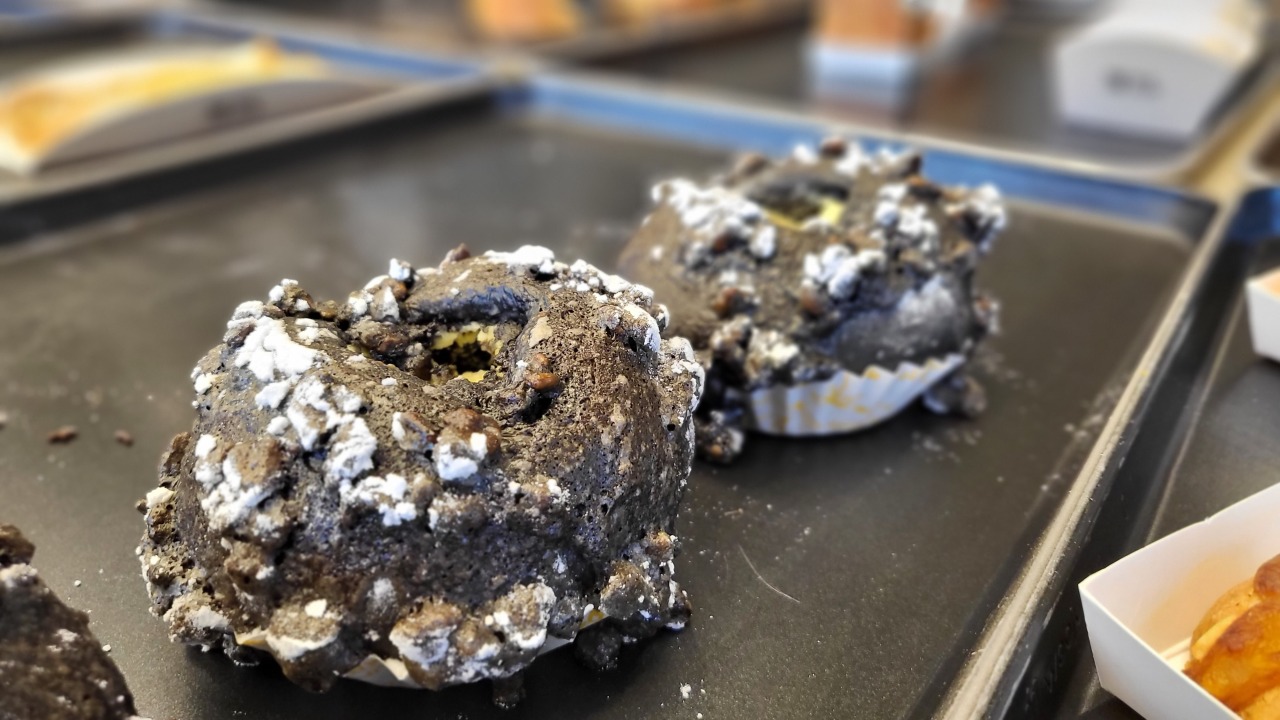 The squid-ink cream cheese donut is one of the signature items at P.Ark Cafe and Bakery. (Kim Hae-yeon/The Korea Herald)
A small indoor tropical forest is located at the center, making the bakery like a vacation spot in itself.

“P.Ark stands for Platform of Ark for Creators. Centered around the bakery where we attract a majority of customers, all other spaces provided in this building make for a holistic experience, while having bread and coffee,” a store staff member told The Korea Herald. 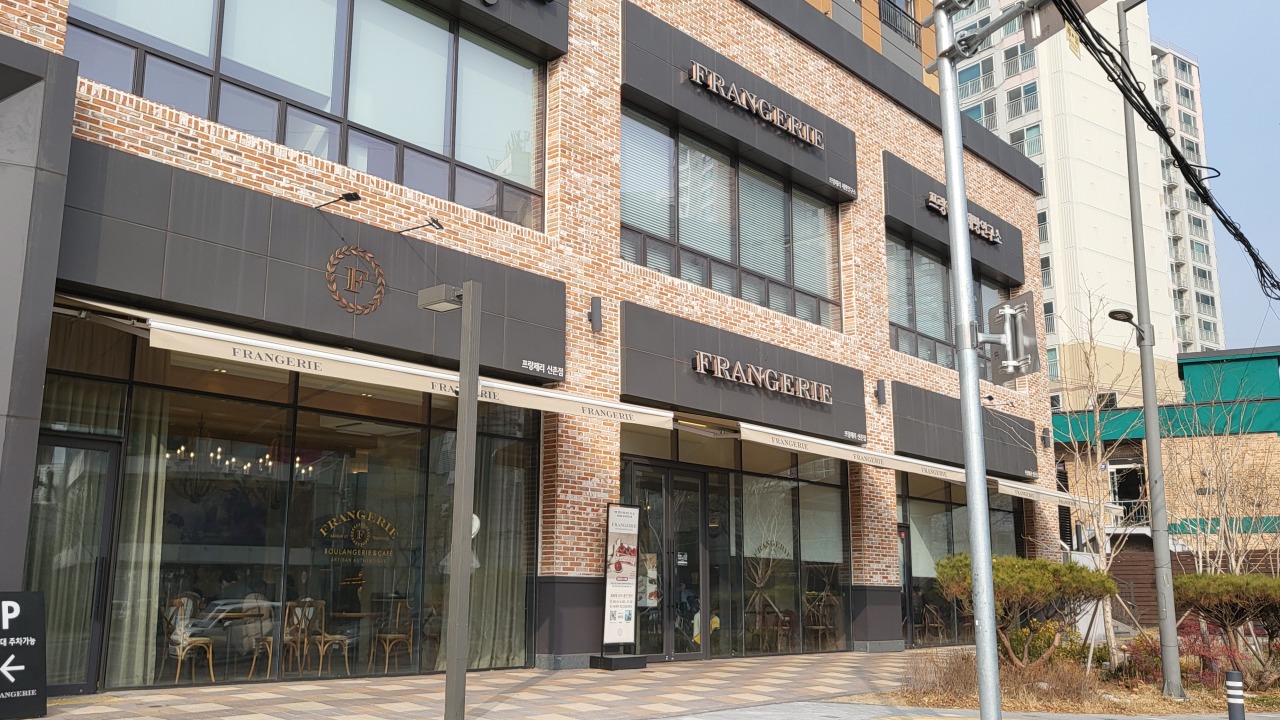 The Frangerie in Sinchon, Seoul (Kim Hae-yeon/The Korea Herald)
The Frangerie has five branches across Seoul and Gyeonggi Province. The largest, which opened in September, is located in Seoul’s Sinchon. The two-story bakery serves customers on the lower floor while the kitchen is located on the upper floor.

Of the 150 types of baked goods that come from the oven three times a day, the apple bread is the signature item. Looking like a bright red apple, the filling consists of rich apple jam and cream cheese.

“Since we are located in the city center, we are also on delivery apps such as Coupang Eats and Baemin. But more people come to dine in on the weekends to enjoy our calm and unique interior and music that are hard to find in other franchise bakeries nearby,” a store manager said Wednesday. 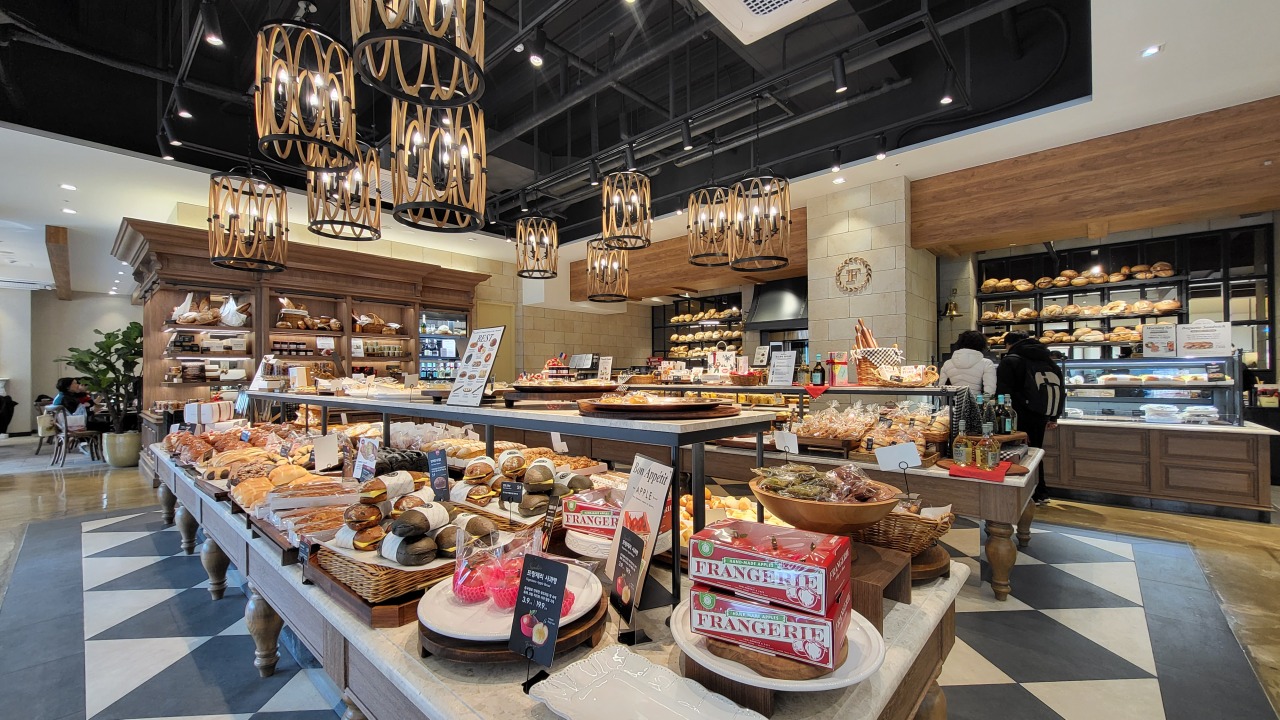 Bread and pastries are on display at The Frangerie in Sinchon, Seoul (Kim Hae-yeon/The Korea Herald)
The apple bread is 3,900 won and many other popular items, such as buttermilk scones, are sold at the same price.