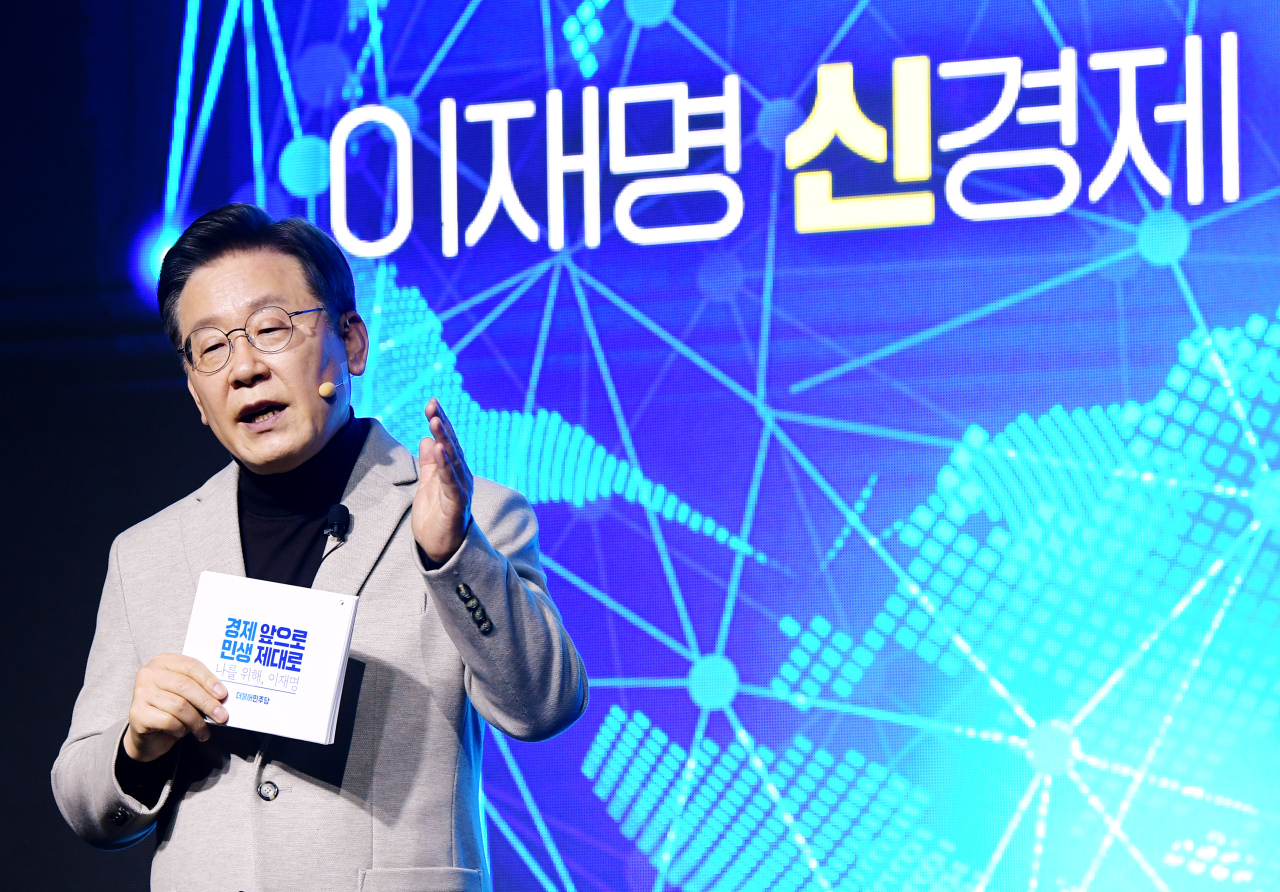 In a press event held Tuesday, Lee Jae-myung promised to focus on investing in advanced technologies and fostering key sectors to achieve sustainable growth with an emphasis on digital and eco-friendly transitions.

Lee emphasized that South Korea should be positioned as a world-class military and economic power with exemplary soft power capabilities that drives innovation and stays at the front in responding to difficult challenges like climate change and providing assistance to developing economies.

His vision entails greater involvement of the government in driving economic growth, which is in line with what the liberal bloc has argued for in responding to ongoing economic difficulties, which have been especially aggravated by the force of the COVID-19 pandemic.

"Our great South Korea has always converted risks into opportunities and achieved success," Lee said. "The same goes for this new transition, and I believe now is the 'golden time' for this initiative."

Lee vowed to have the government stay at the center of long-term scientific growth with a focus on fostering key technologies like artificial intelligence, quantum technology and aerospace technologies. He pledged to create a deputy prime minister position tasked with scientific innovation.

And in response to a changing business climate, the presidential nominee envisions having his government lead infrastructural and policy efforts to help South Korea’s economy undergo a transition highlighted by digital growth and eco-friendly technologies.

He vowed to create an "energy highway" to foster South Korea’s capabilities in renewable energy and related products.

Lee emphasized that growing the manufacturing sector is also important in aiding South Korea to reach $50,000 in GDP per capita, adding it is also in the hands of small and medium-sized enterprises to be supported with budget-backed funds to fulfill digital and eco-friendly transitions at the same time.

The presidential nominee said he will prioritize aiding the growth of the service sector as well, as services must be “smarter” with unparalleled content to further develop its already evident potential. Locally created content can as a whole yield the same economic power as the semiconductor industry, he said.

Lee added he will also work to grow the export volume of South Korea so that it can prolong its export-driven growth, accompanied by government-led support measures and expansion of already established trade networks.

To aid in his vision, Lee vowed to provide bolster education so that students are supported with adequate educational materials to join the economy as useful talents. He said education must be more flexible in a way so it welcomes online knowledge transfer and nationwide establishment of educational infrastructure.

The presidential nominee added he would also make reforms to the country’s transportation infrastructure so that the economy is decentralized and regions outside Greater Seoul are given opportunities to prosper.

For the finance sector, Lee said he would add emphasis to fairness for those in the stock market and stimulate investment towards his goal of having the main bourse Kospi hit 5,000 points during his term.