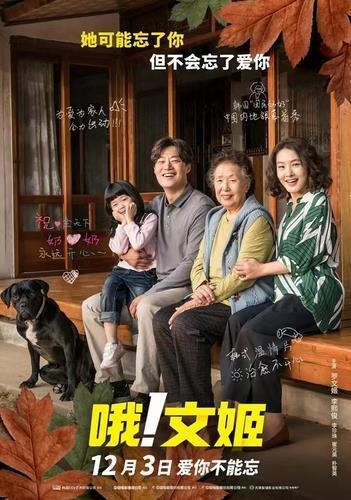 This photo provided by the Chinese Embassy in Seoul shows the poster of the Korean film "Oh! My Gran," which was released in mainland Chinese theaters on Dec. 3, 2021. (Chinese Embassy in Seoul)
A South Korean movie and a TV series have been officially released in Chinese theaters and via a local streaming platform for the first time in about six years, raising cautious hopes that the yearslong cultural freeze between the neighboring countries is thawing.

It is the first time in about six years that a Korean TV series has been broadcast through an official platform in China.

"Saimdang" was completed in 2016 and aired in Korea in 2017. But its Chinese release had been put on hold for years as Beijing imposed a tacit ban on Korean content in protest of Seoul's decision to deploy a U.S. missile defense system, known as THAAD, in 2016.

Since then, Korean TV series, shows and movies have been absent from China's TV networks, formal video streaming platforms and cinemas. Korean artists and entertainers have been barred from having concerts or shows in China.

"We have delivered our opinions concerning cultural content to the Chinese side on various occasions, and hope the consultations could bring about more positive actions," a foreign ministry official said in a briefing last month.

Seoul has made constant efforts to promote exchanges in the cultural sector with Beijing to create an amicable environment for marking the 30th anniversary of establishing bilateral diplomatic relations in 2022.

Some expected that the releases of "Oh! My Gran" and "Saimdang" could lead to China's reopening to Korean culture ahead of the 2022 Beijing Winter Olympics.

"I hope that more films and TV dramas will be broadcast in both countries," Xing Haiming, the Chinese ambassador in Seoul, said in a recent interview with Yonhap News Agency. "And I hope that culture and arts groups can perform in each other's countries as well."

But experts here remained cautious as it is too early to say the Chinese government is set to change its strict position toward Korean content amid the nationwide crackdown on its entertainment industry and other sectors.

"We have only two cases. They look like appeasement gestures," culture critic Ha Jae-keun said. "The Chinese ban on Korean culture stems from political and diplomatic issues. The Seoul-Beijing relations should improve first." (Yonhap)